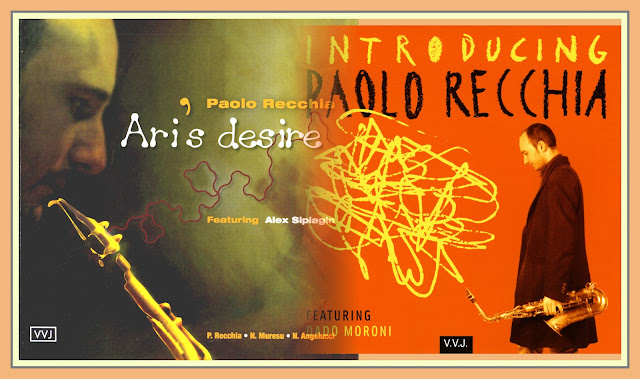 "I listen to this music with a smile on my face. I've know Paolo for a while now. When he came to me for a lesson or two, I recognized his talent at once... a diamond in the rough. Since then, we've crossed paths several times. Usually at a festival or club where we were able to catch up with each other between sets. But it had been a while since I'd actually heard him play.

Last summer I had the good fortune to finally hear him a couple of times at the Tuscia in Jazz festival and was astounded by how much he had grown. When teaching, I always talk about how learning jazz is like learning a new language... a lot of memorizing and imitating. I also talk about the difference between being an artist or a craftsman. Most musicians reach a level where they are good imitators and craftsman... this is not an easy task, it requires a lot of patience, discipline and dedication. There are a few however, who take it to the next level by transforming the information they've assimilated into a language and sound of their own. Paolo belongs to the second category.

When I heard him last summer, I found myself asking myself "what was that?" over and over again; wishing I had a tape recorder so I could go back and transcribe and analyze what he had played. I loved the fact that I heard the tradition... blues, swing, humor... along side of the modern language that any saxophone player since Coltrane, Ornette, Wayne etc... has had to address. I was also flattered because I heard a little of me in him... not a copy but an influence. He had taken what I had taught him and then digested and transformed it. The music on this recording is a beautiful example of Paolo's play­ing and writing.

I know by experience how difficult it is to go into a recording studio for one solo recording. It is a very unnatural and surreal situation. When listening, I was impressed by how relaxed and natural he sounded. I kept asking myself the question "if this is what he can do now, what will he come up with next?" I look forward to listening to him grow and develop. I invite you to do the same.""
MARGITZA, Jazz saxophonist

Now the name – Paolo Recchia – can be added to the list of elite also saxophonists from Italia.

And while Paolo’s style is rooted in the Bebop idioms first introduced on the alto by Charlie Parker, he incorporates elements of Eric Dolphy and Ornette Coleman from what was to later become categorized as “Free Jazz.”

Somewhat amazingly, however, in Recchia’s approach to alto, one can also hear elements of the Early Jazz,  “sweet” sound of Benny Carter, Jimmy Dorsey, Woody Herman, Charlie Barnet and Les Brown – all alto saxophonists who played the instrument with more vibrato rather than the straight, vibrato-less tone preferred by Parker and the “modernists.”

Put another way; you’ve never heard this before.  It’s familiar and different at the same time.

These characteristics of Paolo’s style are particularly noticeable in the following video on which Paolo plays Rodgers & Hart’s Everything I’ve Got accompanied only by Nicola Muresu on bass and Nicola Angelucci on drums.

Trumpeter Alex “Sasha” Sipiagin joins Paolo on all the other selections on Ari’s Desire. With Recchia moving to soprano, here’s a sample of Paolo and Sasha together on Coltrane’s Lazy Bird.

Both Ari’s Desire [VVJ 071] and his earlier Introducing Paolo Recchia [featuring Dado Moroni VVJ 061] can be located on the Via Veneto Jazz website as well as on Amazon.com as mp3 downloads.

Perhaps Paolo’s music is something else that you may want to consider “importing” from besides it foods, cars and clothes?