Paul Marinaro: Without A Song 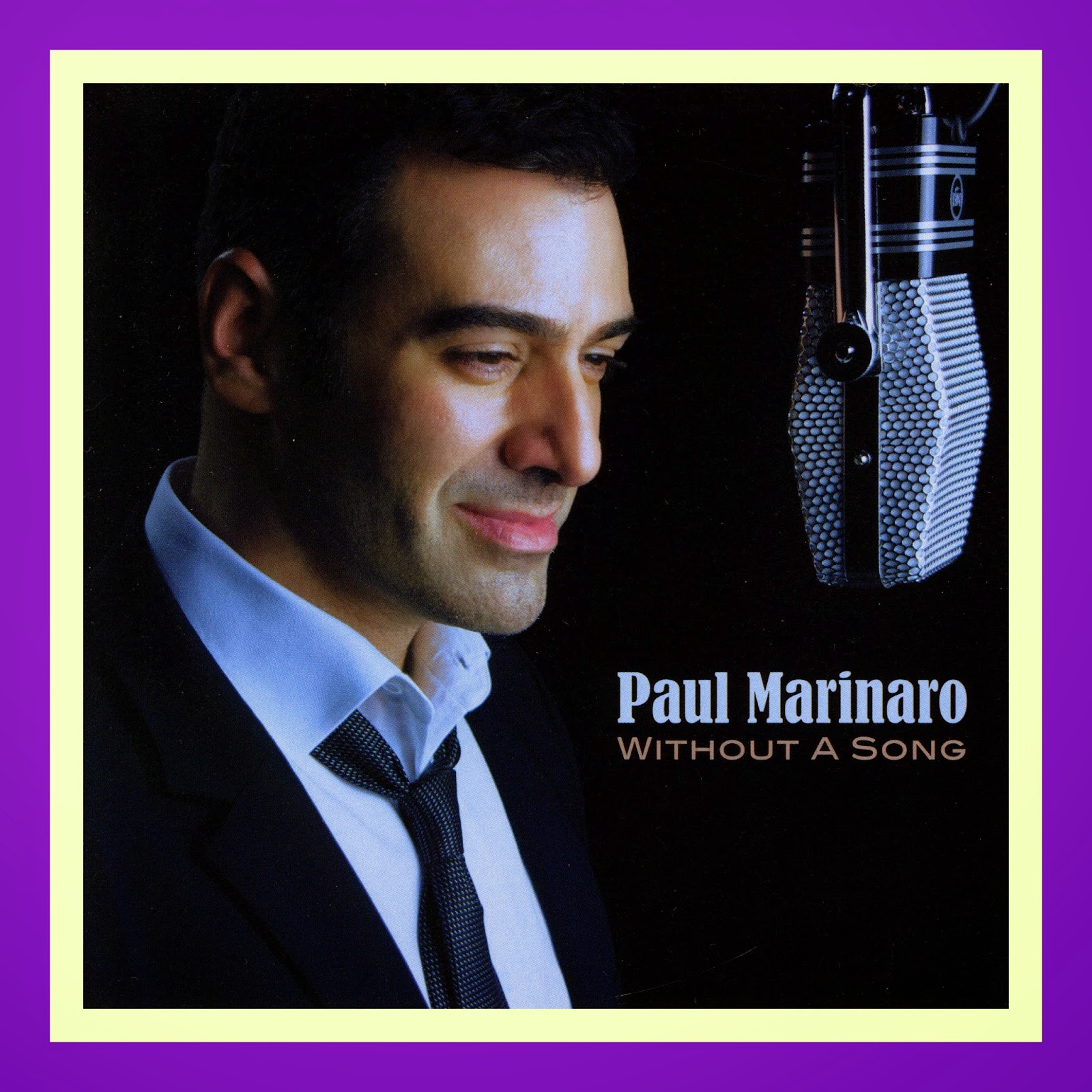 "Marinaro owns one of the most plush baritones in Chicago — or just about anywhere else, and one of these days, perhaps the rest of the world with
know it..a room is fortunate to have him.”
- Howard Reich Chicago Tribune.


"Paul is a mesmerizing singer and performer, and a charming historian of the Great American Songbook."
- Randy Freedman Chicago Jazz Magazine


With this as a background in the music, he should have some idea of what he’s talking about when he writes:


“Right there under your nose in Chicago is a singer named Paul Marinaro who is the best I’ve heard in many years and is, very likely, the most skilled. Hands down.


To anyone who really listens, it will become immediately apparent that he differs from all other present day singers - no matter what they category to which they belong.


And if I were asked where he differs, the simplest and most fitting answer is that he is totally honest. You’ll believe every word he says.


Whatever you call this rare and special quality, Marinaro has it big time which, clearly, makes him one of the select cadre of storytellers. he’s able to draw out the very essence of a song by simply singing the lyrics and notes with unadorned sincerity.


Consequently, he makes every song fresh and full-faced - as if each was important news.  With his excellent tone, he can float a lyric without ever losing his grip on it. His insight and command of this material is truly staggering.


Actually, there’s a deceptive air of simplicity in his singing. Like Nat Cole, it’s art so close to perfection that it seems artless.


I’ve heard many new singers and no one has touched me as deeply as this guy. He’s got it all.”


Not to take anything away from Dick LaPalm’s insights and observations about Paul Marinaro, I quoted them verbatim because try as I might, I couldn’t improve upon them in trying to explain the main reasons why Paul Marinaro impresses me.


And, from every perspective - tone, intonation, ennunciation, time, shading, keys, expressiveness, song selection, understanding of the meaning of the lyrics for each tune, distinctiveness - you name it, Paul Marinaro brings it to his singing.


Chris DiGirolamo at TwoForTheShow Media is handling the media release and he sent along the following annotation of the background and salient features of the CD.


For more information on Paul Marinaro and the new CD go to: www.paulmarinaro.com


© -  Chris DiGirolamo/TwofortheShowMedia.com, copyright protected; all rights reserved.
“Paul's debut album, Without a Song [122 Myrtle Records], is a carefully crafted concept album inspired by his father's unfulfilled dream to have been a professional singer. It is a meticulously culled, exciting, and varied selection of standards on which Paul is accompanied by an array of Chicago's finest musicians. On Without a Song Paul incorporates the beginnings of his love affair with music, when at the age of five, he found his father's homemade 78RPM acetate discs in the attic, heard him singing ''That Old Black Magic," and was mesmerized. Little did his father know that this scratchy recording would be Paul's first musical inspiration...and little did he know that it would be restored and used to open his son's debut album 66 years later. For more information, visit withoutasong.com


About Paul Marinaro:
Chicago-based jazz vocalist Paul Marinaro, dubbed as having "one of the most plush baritones in Chicago - or just about anywhere else" by Howard Reich of the Chicago Tribune, is a modern classic. While his vocal style is peppered with traces of his influences, he has successfully forged his own sound and personality; his performances all possess a fresh, playful, and inventive sense of rhythm and melody, and an expansive repertoire.


The youngest of a large Italian family in Buffalo, NY, Paul was a born singer, growing up in a home surrounded by music. Singing to the radio by the time he was four, Marinaro was raised on the standards, hearing his father singing or playing Sinatra and other classics from the Great American Songbook. Eventually this led to Paul becoming involved with and trained in music as a young child. Since moving to Chicago in 2003, Paul Marinaro quickly made a name for himself, becoming one of the most in-demand male vocalists and having been featured at most of the best music venues in the city. He has maintained an exhaustive performance schedule since arriving in Chicago.


The formation of The Paul Marinaro Trio in May 2008, centering Paul's vocals between the energetic intimacy of piano and bass, began a new chapter in his Chicago career. Featuring classic jazz interpretations, the trio has developed a vast repertoire all culled from The Great American Songbook, has performed weekly at various clubs and has presented a successful tribute series at since 2008. Included among his successful tribute shows are "Sinatra: The World on a String", "A Night of Lady Day: A Tribute to Billie Holiday", "A Celebration of The Nat King Cole Trio", "Marinaro Sings Mercer" and "Marinaro Sings Ellington." Paul's name can currently be seen attached to many of Chicago's best musicians and can be seen weekly at various venues. Through his countless appearances at various Chicago theaters and supper clubs, Paul has had a quick rise to prominence and critical acclaim.
Paul Marinaro has an infectious and palpable passion for the material he chooses, demonstrating an uncanny knowledge of history and musical styles.


Possessing a vast repertoire, Paul enjoys re-interpreting well-known songs, as well as re-introducing long forgotten gems, each presented with both musical intelligence and playful integrity. In 2013, Paul will celebrate his premier album, Without a Song, an extraordinary debut recording that is a carefully crafted concept album stemming from and inspired by his father and his father's unfulfilled dream to have been a professional singer. It is a meticulously culled, exciting, and varied selection of standards on which Paul is accompanied by an array of Chicago's finest musicians.


For this album, Paul incorporates the beginnings of his love affair with music, when at the age of five, he found his father's homemade 78 rpm acetate discs in the attic, heard him singing "That Old Black Magic", and was mesmerized.


Little did his father know that this scratchy recording would be Paul's first musical inspiration...and little did he know that it would be restored and used to open his son's debut album 66 years later.”