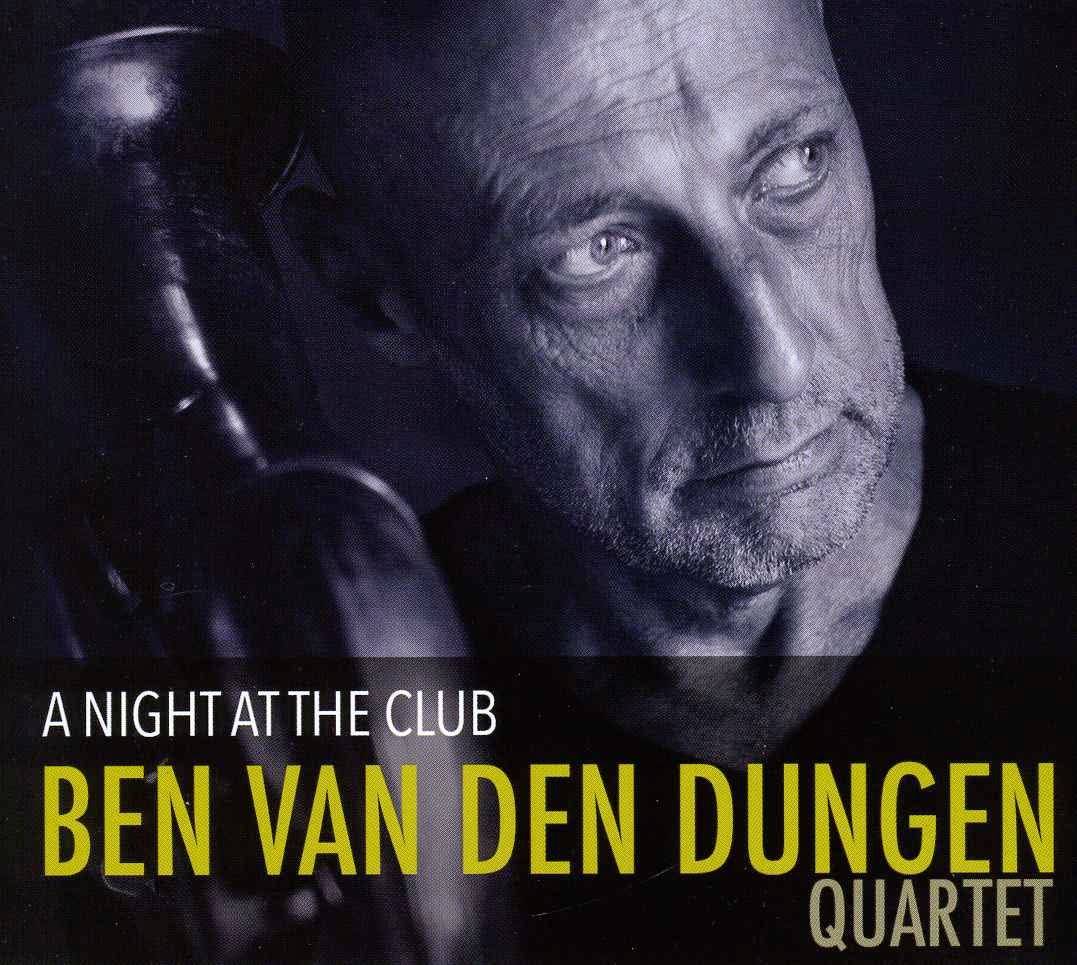 The working premise for the latest CD by soprano and tenor saxophonist Ben Van Den Dungen on Jazz and Worldwide Music [JWA Records 102014] is contained in its title - A Night at the Club: The Ben van den Dungen Quartet.

The club in question is the Cafe Central in Madrid, Spain where the music on the CD was recorded in performance.

Ben explains it this way in the sleeve notes to the CD:

“In May 2014 we played at the Cafe Central in Madrid and recorded this album. I had written a new repertoire and I was curious to how it would work out. I just wanted to make a record that would reflect the playing of my band in a club; the fun of playing Jazz, playing together with an energetic vibe, enjoying the music and giving the audience a nice evening.

The group recorded 84 tracks and from all this material I made the final selection of the ten tracks as arranged on the CD.

During the process I tried to focus on the sound of the band. The music had to sound compact, groovy and, in a way, it had to project the feeling of the blues.

I’ve said it before and I’ll say it again: I love this rhythm section. They are great guys, wonderful musicians and very inspiring to play with. ….” “The rhythm section” that Ben is referring too is Miguel Rodriguez on piano, Marius Beets on bass and Gijs Dijkhuizen on drums.

Along with Ben, they’re are all brilliants instrumentalist who each get a great sound and radiate a warm camaraderie as a group.

Ben is a first-rate leader because because he consistently brings out the honest essence and inspires apex performances. He usually goes first in the solo sequences and takes on the responsibility of showing the way through the song structures and the chords.

Bassist Marius Beets is at the core of the group. He is an earthy and generous player who frequently opens the portals of freedom for the others while holding ground via the bass chair.

Ben and Marius are the elder statesmen while Miguel and Gijs are the youngbloods … so to speak.

Miguel Rodriguez is relatively new to the Dutch Jazz scene and continues to reveal his outstanding gifts as an improvisor on this session.

Powering it all with a precision pulse is drummer Gijs Dijkhuizen whose style offers a nice mixture of polyrhythmic colorings when the music requires such shadings as well as straight-ahead pop and snap when the quartet “steps on the gas.”

Although the time span over which these 84 tracks were laid down is not stipulated on the album, I’m guessing that two shows a night, each with seven tracks a set over a six day period would be required to make this much music happen. Seven tracks per set for three sets over four days also comes out to be a net of 84 cuts.

The math is not the point; the point is that the band played an immense amount of improvise Jazz which is an incredible amount of creative art being produced in a relatively short period of time. Playing Jazz sets is very hard work and demands a lot of concentration and focused energy.

Under these circumstances the consistent quality of the music on  A Night at the Club: The Ben van den Dungen Quartet is very impressive. 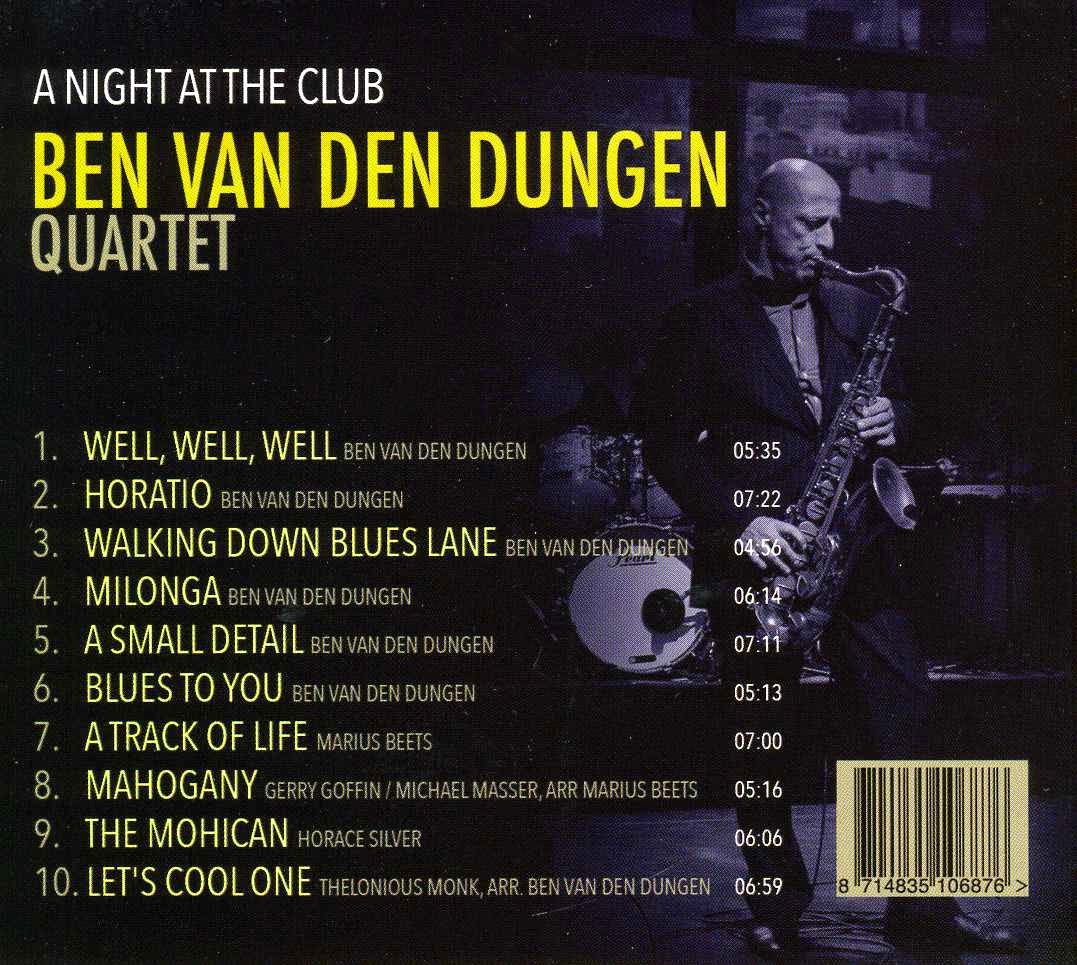 Six of the tracks are originals by Ben, one is an original by Marcus, with Theme from Mahogany [the 1975 film starring Diana Ross] arranged by Marcus, Horace Silver’s The Mohican [and The Great Spirit from Horace's 1977 Silver ‘n Percussion Blue Note LP] and Monk’s Let’s Cool One making up the closing, three tracks.

The range of tunes is impressive both in their diversity and in their consistency. It such a well-balanced album; each tune is interestingly arranged; tempos are thoughtfully chosen and everyone creates solos with just enough blues and swing, personal emotion and inspiration to make the listener feel as though they are sitting in the club with the music happening around them.

Big Ben [and Marius, too] has been doing this for a long-time and he knows what he likes; how he wants the music to sound. His music has always been characterized by the strength of his own convictions. He plays the truth and his music reveals what he likes [by what he includes] and what he doesn’t like [by what he omits].

Each artist has to find the technique that he or she needs to develop what’s inside him and for Ben van den Dungen, this quartet has become the “voice” to express that creativity.

Ben’s music is orderly and has such a great feel to it that it becomes the perfect vehicle for young musicians such as Miguel and Gijs to grow and develop in.

A Night at the Club: The Ben van den Dungen Quartet  [JWA Records 102014] is an excellent example of how the right setting, the right blend of experienced and youthful players and the careful crafting and performing of a variety of Jazz tunes can produced Jazz of the highest quality.

The CD is available at cdbaby.com, iTunes, and at Ben’s website.