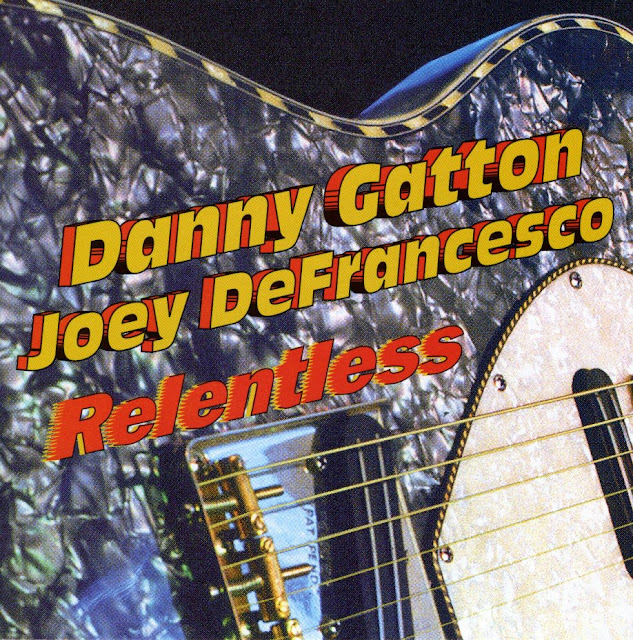 “Danny is full of surprises and into every kind of bag. I think he's going to reach a whole new audience with this one and i want to wish him a lot of luck."
- Les Paul


“Of all the B-3 players that I have ever heard (much less recorded with) Joey D. is the King!  It is inconceivable to me that he can have assimilated the musical knowledge that he has (and uses so tastefully) at only 23 years of age.  Not only was it an honor to work with him, but I was pleasantly surprised to find that he is also a classic car enthusiast like myself... kindred spirits I think ... As usual my regular rhythm section kicked my butt all over the room, it's truly a privilege to be surrounded by such master talent on a regular basis.”
- Danny Gatton 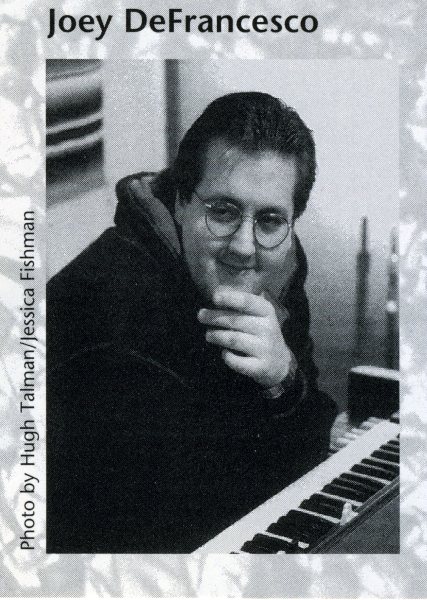 Whenever Hammond B-3 organist Joey DeFrancesco is in town, I try to catch him because if, per Miles Davis, Joey’s inspiration and fellow organist, the late Jimmy Smith, was “the Eighth Wonder of the World,” then Joey must certainly be the Ninth [and possibly the Tenth, too!!].


Joey’s technique is absolutely frightening - the mind-to-hand coordination that he has is right up there with the late pianist Art Tatum.


And what a mind. So incredibly inventive and so studied. Harmonic inventions, rhythmic displacement, risky improvisations with unbelievable resolutions - Joey makes all of them seem commonplace.


But there is something else that makes Joey D. very special - his heart. He has a generosity of spirit that is reminiscent of the late Gerry Mulligan who went out of his way to seek out and play with Jazz Masters of every style and every era.


He even does tribute CD’s to the music of such diverse themes such as Frank Sinatra, Michael Jackson, Italian Love Songs, and Christmas [“Home for the Holidays”].


Joey has even found time to re-imagine Horace Silver with his own versions of each of the tunes on the classic Blue Note album Finger Poppin’.


I mean, the man is positively ecumenical in his approach to the many faces and facets of Jazz. For me, perhaps, the oddest pairing of Joey with another musical associate was the CD he made in 1994 with Country and Western guitar master Danny Gatton entitled Restless [Big Mo Records 20232].


The remarkable thing about this CD is how well Danny and Joey work together [along with bassist John Previti and drummer Timm Biery] and compliment one another’s disparate styles.


You can get a sense of what’s going on with these “boundary-crossing ...wizards” from a reading of Frank-John Hadley’s enthusiastic insert notes to the CD and by listening to one of the tracks from the recording which you will find in the video that concludes this feature.


“Only rarely in this staid, dispassionate jazz era does a collaboration take place that provides listeners with the hair-raising thrill of a roller coaster making a 92-foot drop at 65 mph. Well, hold on tight because guitar man Danny Gatton and organist joey DeFrancesco have the ability to pack extraordinary excitement into the music they play throughout their first recorded all-instrumental Relentless.


On jazz classics, the partners brim over with bold ideas that always lead somewhere interesting. Rejecting the starchiness of typical bop guitar, Gatton makes his melody lines and surprising chord choices modulate with a driving determination. The organist is also in fine fettle, conveying his complete assurance. Take their lickety-split rendition of Wayne Shorter's The Chess Players, where they nearly match the verve and emotional pull of Art Blakey's jazz Messenger soloists Shorter, Lee Morgan and Bobby Timmons. Hear them negotiate the knotty angles of Thelonious Monk's Well, You Needn't (which benefits from the urgency of Gatton's long-time bassist John Previti) or fresh roast the chestnut Broadway, an impromptu studio outburst with rousing guitar-organ exchanges. The density of the fleet-fingered playing is balanced by an honest propensity for swinging.


Gatton's trusty guitars and amps have been a thunderbolt from the blue for a good number of years before this exciting session. Washington D.C.-area bar patrons of the mid-1970s were the first to get swept along in his six-string inferno and later the flames spread like wildfire among guitar buffs around the country when Gatton toured with rockabilly advocate Robert Gordon and singer-songwriter Roger Miller. Gatton eventually hooked up with an aggressive manager and broke out of D.C. with a typically raucous appearance before Manhattan industry bigwigs gathered for a 1988 Hard Rock Cafe bash in honor of techno guitar master Les Paul. With Guitar World proclaiming him the "World's Greatest Unknown Guitarist," Elektra released an album, 88 Elmira St. (1991), that placed his distinctive melange of rockabilly, country & western, soul, proto-rock, blues and exotica in the pop-music marketplace. Second Elektra release Cruisin' Deuces (1993), explosive gigs all over, and now Relentless, keep his skills on public display.


Gatton, by the way a respected hot-rod customizer, is no stranger to jazz, and his pairing with Hammond whizz-kid DeFrancesco on Relentless is as natural as daybreak. Though cutting his stylistic teeth on Chuck Berry, Wilson Pickett and rockabilly as an up-and-coming player, he's long been awestruck by the jazz-playing of Paul and the late great Lenny Breau. The occasional jazz gig, it's said, sustained Gatton's faith in music during a soul-searching period in the '80s, and just last year the 47-year-old did himself proud soloing and chording with poise in the company of mighty young lions Joshua Redman and Roy Hargrove on the Blue Note studio jam session titled New York Stories. In fact, catch Gatton live or scrutinize his discography (which includes obscure home-made records from way back when) and you'll encounter respectful nods to Breau, Paul, Wes Montgomery and even "free jazz" in a style that also encompasses Duane Eddy twang, Berry reelin' and rockin' and references to young Elvis "hillbilly" Presley and guitar sidekick Scotty Moore.


DeFrancesco, only 23 this past April, is at the forefront of the ongoing organ revival. Born and bred in Philadelphia, once the organ-fueled hard bop paradise of Jimmy Smith and others, he's made a mark on the international jazz scene in just a short while, largely on the strength of five feature albums on the Columbia label. With his grooves rivaling those of elder B-3 specialists, DeFrancesco's remarkable technical skills and comprehensive knowledge of harmony have earned him accolades from no less than venerated jazz men Illinois jacquet, jack McDuff (joey's recent B-3 sparring partner in clubs) and Milt Hinton.

Both Danny Gatton and Joey deFrancesco play it for keeps, and Relentless makes a large impression as an eventful and unpretentious meeting. Enjoy — but remember to keep those seat belts fastened.”


You can check out Danny and Joey “at work” on Wayne Shorter’s The Chess Players on the following video.