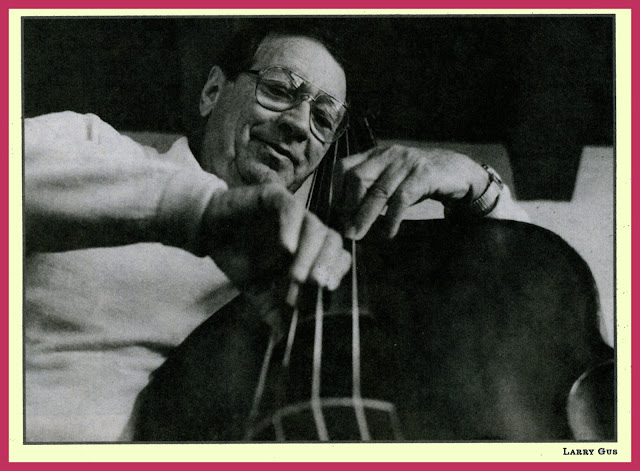 Whether you are a musician, a club owner, recorded producer or concert impresario, Jazz has always been a tough business to be in.

I mean one answer to the question - “How do you make a million dollars playing Jazz?” is to “Start with two million dollars!” - basically says it all.

So when a nice guy comes along and touches the lives of Jazz musicians, fans, record labels, club owners and concert promoters in such a positive way, the least we can do is call attention to him as a way of saying “Thank You.”

Such a person was bassist, bandleader and Jazz entrepreneur Howard Rumsey who passed away on July 15, 2015.

I knew Howard Rumsey for 57 years and every time we met he asked after me, gave me words of encouragement and told me “How nice it is to see you again.”

Here’s Steve Chawkins’ loving tribute to Howard which appeared in the July 25, 2015 of The Los Angeles Times.

"Howard Rumsey, a bass player who turned a down-at-the-heels sailors’ hangout in Hermosa Beach, CA into ground zero for West Coast jazz, has died. He was 97.

"He came along at precisely the right time," Poston said, "and was able to establish what became an iconic place in the history of jazz."

In 1949, the Lighthouse drew a rough crowd of longshoremen and merchant seamen. Rumsey, a tall, self-effacing musician who played dime-a-dance halls along the coast before hitting the road with big bands, wandered in for a beer one afternoon in May. Tired of traveling, he was patching together local gigs and tried to talk owner John Levine into letting him stage Sunday afternoon jazz performances.

"Hey, kid," Levine said, "Sunday is the worst day of the week for the liquor business."

But Rumsey persisted. "I pointed to the empty club and said, 'What can you lose?'" he told The Times in 1989.

"The next week we propped open the two front doors and blasted music out onto the street, and in a couple of hours there were more people in there than he'd seen in six weeks."

"He was trying to be very incognito, sitting quietly at the end of the bar," Rumsey recalled. "Then his name was announced. He walked to the piano, played 'Round Midnight,' got up, took a bow and walked right out the front door. I never saw him again."

In the early days, African American musicians had a tough time navigating around local police officers, who sometimes tailed them through town. To the chagrin of Levine and Rumsey, many quit coming and didn't resume for several years.
Rumsey "just had to stick with it and overcome it," Poston said.

"He became a trusted member of the community and was able to break down some of that stuff."

At Levine's urging, Rumsey joined the local Chamber of Commerce. He wrote music columns for a local newspaper. The Lighthouse co-sponsored an annual beauty contest and participated in parades.

In addition to acting as the club's frontman, Rumsey booked talent, announced acts, kibitzed with the guests, made people feel at home and, occasionally, picked up his bass. On busy Saturday nights, the Lighthouse turned away hundreds of would-be patrons, many of them students from UCLA and USC.

In 1956, NBC's Dave Garroway, and the Monitor TV program, riding a wave of interest in California's far-out beach scene, gave the Lighthouse national exposure. "We just step out of the ocean and start for the music," Garroway said, as a couple in swimsuits emerged from the surf and walked barefoot down the street.

"Oh, your feet will still leave little wet footprints on Pier Avenue every step of the way to John Levine's Lighthouse Cafe," Garroway said as the camera panned over a sun-baked crowd and the new sounds of California cool played in the background. "This is jazz — modern jazz—not for the cultist or the sectarian, but free-swinging music improvised with enthusiasm."

Critics suggested that East Coast jazz and West Coast jazz were essentially different, but Rumsey didn't completely buy it. In 2009, he offered his own description of the West Coast strain to jazz writer Marc Myers: "It's the music of happy — in a hurry."

Born Nov. 17, 1917, in Brawley, Calif., Rumsey started piano lessons when he was 4. By the time he was 18, he was playing bass in clubs. When Stan Kenton wanted him to play with his band at the Rendezvous Ballroom in Balboa Beach, the great jazzman asked permission from Rumsey's mother, who at the time ran a chicken pie shop in San Diego.

Ultimately, Rumsey spent two years on the road with Kenton's band.
"He made a professional musician out of me — which was rather hard to do," Rumsey said in Ken Koenig’s award-winning 2005 documentary, Jazz on the West Coast: The Lighthouse.

At the Lighthouse, Rumsey started annual collegiate jazz competitions, cultivating his audience and his future players at the same time. He took his Lighthouse All-Stars on college tours and, at one of them, met future wife Joyce. They were married for 47 years until her death in 1998.

In 1970, Levine, whom Rumsey said he saw as a second father, died suddenly.
When the club's new owner, Levine's son John, wanted to feature blues more prominently, Rumsey opened another jazz spot — the Concerts by the Sea club in Redondo Beach. After retiring in 1985, Rumsey pursued a quiet life of golfing in Hemet.

Eventually, he moved back to Newport Beach. In his later years, he was an elder statesman of local jazz.

"Whenever Howard showed up, it was a big deal," Poston said. "The musicians loved it, the patrons loved it—it was just a great scene."

And so it was for Rumsey.

"When you have great jazz improvisationalists working together, it's like the aperitif of life," he told The Times in 1999. "There's nothing more elegant and beautiful.""