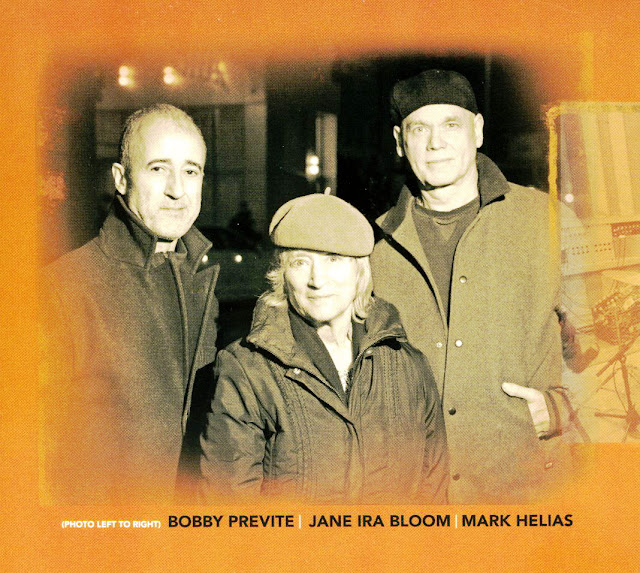 Crystalline beauty - I never thought I would use this phrase in describing the sound that comes from a soprano sax - but that’s exactly what comes to mind when Jane Ira Bloom plays the instrument.


Jane has such a grand and glorious tone that she plays one note and your hear the whole instrument.


There’s so much profundity in just one note - she’s thoughtful and reflective and takes her time with phrases, letting a note trail off or naturally fade away while still holding it - that her sound evokes a sad or bittersweet beauty in her music.


Because Jane has such great control over her instrument she is able to render a plaintive, beautiful and emotive expression of a song’s melody; she just let’s the melody speak, clearly and distinctly.


The other element of Jane Ira Bloom’s approach to Jazz that has alway struck a responsive chord with me [pun intended] is her use of space which helps lend an atmospheric quality to her lines [improvisations].


The crystalline beauty of her tone, her judicious use of space that allows the music to breath is further enhanced on her forthcoming CD - Early Americans - by her choice of contexts, in this instance, her association with bassist Mark Helias and drummer Bobby Previte.


In some ways, a trio made up of a horn, a string and a percussion instrument strips the context down to a bare minimum and allows the musicians to listen to one another more closely while affording the listener a chance to hear each musician more clearly.


The results are magical.


Jane Ira, Mark and Bobby bring a virtuoso level of musicianship into an intimate trio setting and produce music that is warm, flowing and “conversational” - the epitome of the kind of dynamic interaction one would expect from a blending of such exceptionally talented musicians.


Jane Ira Bloom - Early Americans launches as an Outline [OTL 142] stereo CD on May 13, 2016. It is available for pre-order on Amazon as either an Mp3 download or a CD and you can locate more information about it and Jane’s other recordings by visiting her at www.janeirabloom.com.


You never know what American original soprano saxophonist Jane Ira Bloom is going to do next. After the success of her 2014 all-ballads release "Sixteen Sunsets" Bloom shifts into another gear showcasing the kinetic energy of her acclaimed trio playing with the musicians that she knows best on Early Americans (OTL142).


It's her first trio album, sixteenth as leader and sixth recording on the Outline label. Her sound is like no other on the straight horn and she lets it fly on every track. She's joined by long-time bandmates Mark Helias on bass & drummer Bobby Previte and with over fifty years of shared musical history together the album is sure to be a winner. Bloom's collaboration with Helias dates back to the mid 70's in New Haven CT and her unique chemistry with Previte has been ongoing since 2000.


She brought the group together in summer 2015 to Avatar Studio B in NYC to capture their breathtaking sound in both stereo and surround-sound with renowned audio engineer Jim Anderson. The album features twelve Bloom originals ranging from the rhythmic drive of "Song Patrol" and "Singing The Triangle" to the spare melancholy of "Mind Gray River." She closes the album with a signature solo rendition of the American songbook classic, Bernstein & Sondheim's "Somewhere." World-renowned portrait photographer Brigitte Lacombe contributes a stunning cover image of Bloom. "Playing in threes" has always held a special fascination for jazz artists - it offers the possibility that something can be slightly off balance and that's just what fires the imagination of players like Bloom, Helias, & Previte.


With Early Americans Jane Ira Bloom stands in the vanguard of her generation carving out new territory in the heart of the jazz tradition, Don't miss this trio of "fearless jazz explorers who share a commitment to beauty & adventure."


Soaring, poetic, quick silver, spontaneous and instantly identifiable are words used to describe the soprano sound of saxophonist Jane Ira Bloom. She's been steadfastly developing her singular voice on the straight horn for 35 years creating a body of music that marks her as an American original.


She's an eight-time winner of the Jazz Journalists Association Award for soprano sax, the Downbeat International Critics Poll, and the Charlie Parker Award for Jazz Innovation and has collaborated with such outstanding jazz artists as Charlie Haden, Ed Blackwell, Kenny Wheeler, Julian Priester, Mark Dresser, Jerry Granelli, Matt Wilson, Billy Hart and Fred Hersch. Her 2014 all-ballads release "Sixteen Sunsets" was nominated for a Grammy Award for surround-sound. In addition she's garnered numerous awards for her creativity including a Guggenheim Fellowship in music composition and the Mary Lou Williams Women In Jazz Award for lifetime service to jazz. JIB was the first musician commissioned by the NASA Art Program and was honored to have an asteroid named in her honor by the International Astronomical Union (asteroid 6083janeirabloom).


The subject of numerous media profiles on network television, on radio, and in major national magazines, JIB has recorded and produced 16 album projects since 1977 for CBS, Arabesque, ENJA, Pure Audio and Artistshare Records, and founded her own record label (Outline Records). A professor at the New School for Jazz in New York City, she holds degrees from Yale University, the Yale School of Music and continues to find inspiration merging her music with the world of arts and ideas.”


I have re-posted my earlier review of Jane’s Sixteen Sunsets as the featured blog in the side bar and the following video will provide you with a sampling of the music on the forthcoming Early Americans disc. The tune is entitled Rhyme or Rhythm.