Bill on Bill: Dobbins on Holman [From the Archives] 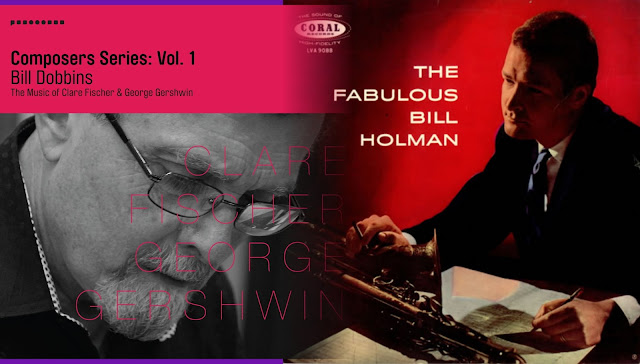 “I consider Bill Holman to be one of the most important jazz arrangers and composers after Duke Ellington's generation …. Willis has certainly made his own imprint. His music continues to evolve, while always embodying the essence of jazz.”
- Bill Dobbins


The Note magazine is published twice a year by the Al Cohn Memorial Jazz Collection, East Stroudsburg University of Pennsylvania, as part of its educational outreach program.


The editor is Matt Vashlishan, D.M.A., and you can locate more information about the Al Cohn Memorial Collection, The Note magazine, and how to make a donation in support of the ACMJC by visiting this website: www.esu.edu/alcohncollection.


The current edition of The Note magazine - Vol 26 - No. 1 - Issue 65, Fall/Winter 2016 features a well-written and informative essay by composer-arranger-educator Bill Dobbins on composer-arranger Bill Holman, whom many of us believe is a national treasure for the original portfolio of Jazz compositions and arrangements that he has created over the past 60 years.


Here are some excerpts from Bill Dobbins’ insightful essay:


“My first encounter with Bill Holman's arranging occurred a couple of years before I even recognized the name. While in high school, my awareness of big bands was limited mainly to Count Basie, Duke Ellington, Gil Evans (including the collaborations with Miles Davis) and Gerry Mulligan's Concert Jazz Band [Verve].


The Mulligan recording, which was the debut album of the band, didn't credit the arrangers for the individual tunes. I really loved all of the arrangements, but I was especially drawn toward Out Of This World and I'm Gonna' Go Fishin'. I was intrigued by the contrapuntal writing, the incorporation of bluesy elements in the melodic content and the way everything swung so powerfully. Many years later I learned that these arrangements were written by Bill Holman. …


Some of my most rewarding and gratifying experiences have been the opportunities I have had to get to know and collaborate with my musical heroes. I first got to know Bill Holman in 1985 at a jazz workshop in Tubingen, Germany, which was organized by Hans and Veronika Gruber and Advance Music. The workshop included well over a hundred students and about twenty of the world's leading jazz musicians as the faculty, including Louis Smith, Randy Brecker, Dave Liebman, Bobby Watson, Sal Nistico, Richie Beirach, ….”


“It was interesting for me to learn that Bill Holman was primarily self-taught, although he did take a few courses at Westlake College of Music, where he studied commercial writing with Russ Garcia. It was also refreshing to hear him talk about his arrangements, compositions and the creative process of writing in a simple, easy to follow manner that never got bogged down with technical complexity or pretentious academic jargon. Before the workshop was over I also found out that he was a friendly, no nonsense type of person with a dry and ever alert sense of humor. ….”


The further I got in my transcription and musical analysis, the more amazed I became at Holman's absolute mastery of the basic techniques of thematic development, counterpoint, reharmonization, orchestration and formal design. Moreover, it eventually became clear that the content of the entire piece was developed from just four simple thematic motives and/or rhythms. And many of the techniques were the same I had become familiar with in the greatest classical composers from Bach to Shostakovich


There were two overarching aspects, however, that really drove home Holman's mastery of his craft. The first was that the two uptempo movements, the first and third, began with the same 30 measures as part of an extended introduction that introduced all four of the principal motives.

However, from the 31st measure onward, Holman developed two organically related but completely different pieces of music. The second aspect was that, having begun the outer movements with extended introductions, he balanced the whole suite near its conclusion, with a coda of more than a hundred measures. Furthermore, the coda brought back the most important thematic motives of all three movements, and each motive was transformed by a final brilliant and unexpected twist or turn that left me in a state of complete exhilaration every time I listened to whole piece without interruption….”


“ … Following a concert during which which Bill conducted the Eastman Studio Orchestra [Bill Dobbins is the resident musical director at Eastman which is located in Rochester, NY] in 2011,  I asked Holman if anyone had ever gotten together with him for a number of consecutive days to record conversations about his life in the music and his ideas about writing. When he said that no one had made such a request up to that time, I immediately got his permission to request some travel money from the school, and I set up a week during the following August to go out to Los Angeles and record a series of conversations about Holman's early years, his musical career and his thoughts on composing, arranging, musical cohorts and the creative process.


While I was in L.A., I got together with an old college friend, saxophonist Rusty Higgins, who had subbed from time to time in the Bill Holman Band since moving there in the early 70s. It was during our dinner conversation that I first learned that all of Holman's friends call him Willis. By the end of that week I got used to calling him Willis, too. I'll always have fond memories of the graciousness with which he and his wife, Nancy, opened up their home to me for those conversation sessions.


I consider Bill Holman to be one of the most important jazz arrangers and composers after Duke Ellington's generation. Throughout his career, his personal evolution has always maintained a connection to the music that first took root in him, that of Count Basie, Lester Young, Duke Ellington, Mel Lewis, Zoot Sims and other jazz giants who have made an indelible imprint on the music. Willis has certainly made his own imprint. His music continues to evolve, while always embodying the essence of jazz.”


You can checkout Bill Holman’s arrangement of Out of This World as performed by the Gerry Mulligan Concert Jazz Band on the following video.


As an interesting aside, in the early 1950’s, Gerry wrote some arrangements for the Stan Kenton Orchestra. At the time, Bill Holman was playing tenor sax in Stan’s band. A couple of years later, Bill began arranging for Stan and when asked what model he followed when arranging and orchestrating, he named Gerry Mulligan as his chief inspiration!