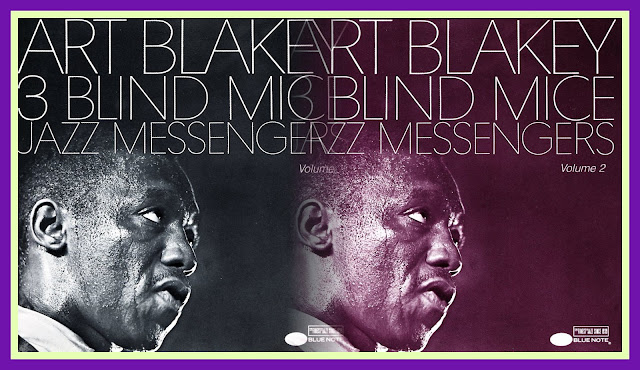 “Art Blakey. What a guy. Perhaps you know the famous story about Blakey and his sidemen driving between New York and Pittsburgh.  They drove by a cemetery where a burial service was taking place. They stopped and parked and Blakey walked over to listen. It turned out that it was a pauper's funeral and the preacher was having no success in getting someone to say something over the dead man. There was a long pause and a lot of uncomfortable shuffling and, finally. Art said, ‘If no one wants to talk about this man, I'd like to say a few words about jazz.’”
- Doug Ramsey, 1998, from a private correspondence with me

Returning to our current theme of favorite Jazz records, the digital reissues made possible by the development of the compact disc often provided more music from the original LP dates in the form of alternate tracks or tracks left off due to lack of space.

This abbondanza was especially welcomed in the case of drummer Art Blakey & The Jazz Messengers, Three Blind Mice [84451 and 84452] which was recorded in performance at the Renaissance Club in Hollywood, CA in March, 1962

In addition to Curtis Fuller on trombone, Wayne Shorter on tenor saxophone and Cedar Walton on piano, Art’s Messengers at the time feature Freddie Hubbard on trumpet and Jymie Merritt on bass.

“The Golden Era of Art Blakey and The Jazz Messengers began in late 1958 when Blakey introduced his new quintet with Lee Morgan, Benny Golson, Bobby Timmons, and Jymie Merritt with what is probably his best selling album of all time MOANIN'. Golson was soon replaced by the returning Hank Mobley In the fall of '59, Wayne Shorter replaced Mobley and Walter Davis replaced Bobby Timmons. When Timmons returned at the beginning of 1960, the quintet's personnel was stable and during the next 18 months recorded for Blue Note an incredible body of music: THE BIG BEAT, A NIGHT IN TUNISIA, LIKE SOMEONE IN LOVE, MEET YOU AT THE JAZZ CORNER OF THE WORLD Vols . 1 & 2, ROOTS AND HERBS, THE WITCH DOCTOR and THE FREEDOM RIDER.

Even the most perfect of situations must evolve, preferably before redundancy or staleness set in.  So it was with this most perfect quintet.  In June of '61, they recorded one album of standards for Impulse with Curtis Fuller on trombone. Soon thereafter, Lee Morgan and Bobby Timmons left to be replaced by Freddie Hubbard and Cedar Walton.  Fuller stayed on to make it a sextet

A new Messengers was born. The third horn opened up new arranging possibilities. And Walton, Hubbard, Fuller and Shorter started arranging and voicing a small group with the same brilliance that made their compositions so remarkable. The Jazz Messengers moved further away from the funky approach that gave them such hits as "Moanin"' and "Dat Dere" and into the forefront of the most intricate modern jazz. When these men wrote for the group, it was not a simple matter of an AABA structure in 4/4. They were starting from scratch structurally, harmonically and rhythmically to create awesome pieces. What made the miracle complete was that Blakey drove them with a vengeance, making every shift and change without ever disturbing the swing or velocity. This was a most major organization for its three-year existence.

This sextet's recording life started most inauspiciously with a failed live recording at the Village Gate on August 17, 1961, which was never released at the time. The two retrievable performances from that night, "The Promised Land" and 'Arabia", appear on Volume Two of this collection.

Two months later, Blakey took the band into Rudy Van Gelder's to re-record most of the material from the live date and out came the absolute classic MOSAIC. Two months later, they recorded another studio album BUHAINA'S DELIGHT At this point, Blakey and Blue Note parted ways.

In March of 1962 came a one-shot deal with United Artists Records recorded live at the Renaissance in Los Angeles which bore the magnificent THREE BLIND MICE, which is fully embodied in Volume One of the CD reissue

Along with on alternate take of "Up Jumped Spring", versions of "It's Only A Paper Moon", 'Mosaic" and "Ping Pong" were ultimately issued in 1976 on a Blue Note album entitled LIVE MESSENGERS.  Despite the quality of these performances, these tunes could not be considered for release at the time because they had been recorded too recently by Blakey for Blue Note.

Soon after this live recording, Merritt was replaced by Reggie Workman and the sextet signed with Riverside where it made three excellent sessions. They returned to Blue Note in February of '64 and recorded the ferocious, majestic FREE FOR ALL. In May, Lee Morgan returned to replace Hubbard and the band recorded INDESTRUCTIBLE. Within months, this extraordinary ensemble would disband and Blakey would leave Blue Note permanently as a recording artist.

But the voluminous and breathtaking output of these two related editions of The Jazz Messengers from 1959 to 1964 will help the magic of their music live forever in our hearts and minds.”
—Michael Cuscuna


Although it is primarily a feature for pianist Cedar Walton with the horns only coming in to add occasional color and to help create a vehicle to close the tune, I've selected That Old Feeling as an example of the music on Art Blakey and The Jazz Messengers, Three Blind Mice because it also shows off another great quality in his playing - his skill as an accompanist.

BTW ... Art was a skillful bandleader in that he always included a piano-bass-drum feature when The Messengers were making a club date to allow the horn players to rest their lips [aka "chops"] during each set.


And what is it about Cedar Walton piano playing that is so engaging? He 's not a technical marvel with dizzying displays of notes flying all over the place. Nor is he an introverted romantic whose playing forms deep and melancholy moods. His approach to the instrument is to play it in a straight-forward and swinging manner. He weaves in and out of a rich tapestry of melodies that leave a smile on your face and a feeling of light fascination in your heart. Cedar's music just feels good: nothing complicated, no overt pianism; just That Old Feeling- the one that made you fall in love with Jazz in the first place.