Being around the Southern California Jazz scene in the second half of the 20th century was great for so many reasons, not the least of which were the many opportunities to hear trumpeters Pete and Conte Candoli perform in a variety of settings.


Pete (left in photos) and Conte Candoli would be high on anyone's list of illustrious brothers in jazz. Both came to the fore in the exuberant First Herd of Woody Herman, the band that included Ralph Burns and trombonist Bill Harris. Pete had played in the bands of Sonny Dunham, Will Bradley, Ray McKinley, Tommy Dorsey, and Teddy Powell, but it was Herman who featured him to fullest advantage.


Because he was so handsome and so powerful a trumpet player, Pete took on a Superman status, and finally Woody featured him in that role. In a Superman costume made by his wife, Pete would leap onstage from the wings, trumpet held high, and blast out the high notes. It was very funny, and typical of that brilliant, crazy band.


Conte Candoli first played with Woody in 1943 during the summer vacation months, when he was still a sixteen-year-old high school student. On graduation in 1945, he joined the band full-time, where the brothers Candoli sat side by side in the trumpet section.


Pete is primarily a lead-trumpet player. Rob McConnell has said, "Give me a great drummer and a great lead trumpet and I'll give you a great band." The lead-trumpet chair is a strenuous and demanding position. Pete is one of the best. 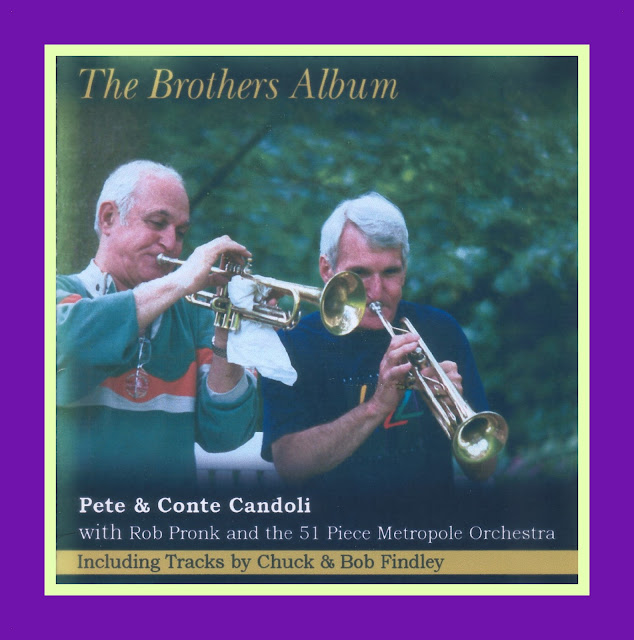 After leaving Woody, Pete played lead for Boyd Raeburn, Tex Beneke, Jerry Gray, Les Brown, and Stan Kenton. He settled in Southern California and immediately found himself in demand in the studios. If you ever see the Marlon Brando film One-Eyed Jacks, note the solo trumpet in Hugo Friedhofer's haunting score. That's Pete.


Conte is a bebopper inspired by Dizzy Gillespie. He has played with so many major jazz performers that it is impossible to list them all. Gerry Mulligan, Teddy Edwards, Shelly Manne, Terry Gibbs are only a few. Like many jazz musicians, Conte is active as a teacher.


From time to time, Conte and Pete performed together. You can hear the differences in their playing. And you can notice the warm fraternal love they have for each other, which John Reeves has captured so well in these portraits.


The Brothers Candoli are no more, but you can enjoy some of the magic they made while playing together with a sampling of their music on the following video tribute to them.