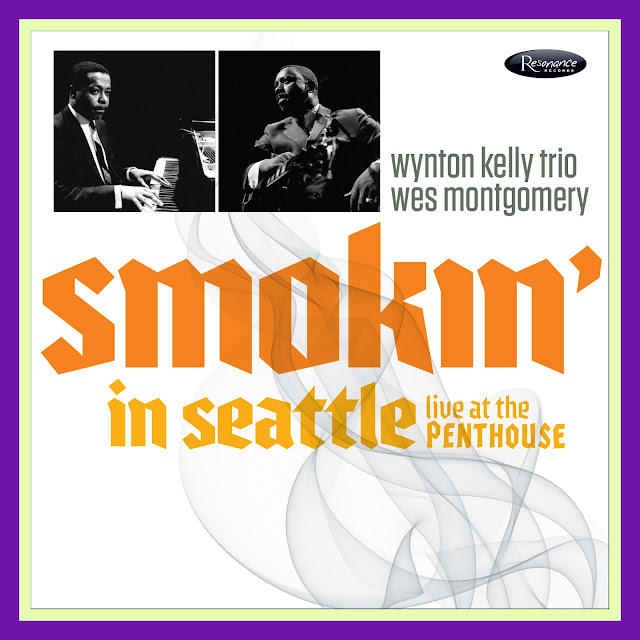 Michael Bloom of Michael Bloom Media Relations is handling the public relations for the latest in Resonance Records continuing series of recently discovered classic recordings by Jazz Masters from halcyon days gone by and he sent along this information about:

Los Angeles, CA (March 13, 2017)- Resonance Records is proud to announce the release of Wes Montgomery with the Wynton Kelly Trio - Smokin' in Seattle: Live at the Penthouse (1966) captured live at the Penthouse jazz club in Seattle, WA on April 14 and 21, 1966. Smokin' in Seattle marks the third commercially released live album of guitar icon Wes Montgomery with piano legend Wynton Kelly, recorded only seven months after their classic 1965 live album Smokin' at the Half Note, notably referred to by Pat Metheny as "the absolute greatest jazz guitar album ever made." Wynton's dynamic trio features the solid rhythm section of bassist Ron McClure -who took the place of long-time trio bassist Paul Chambers, then joined Charles Lloyd's "classic quartet" with Keith Jarrett and Jack DeJohnette following this stint with Wes and Wynton - and the legendary drummer Jimmy Cobb, an NEA Jazz Master most well-known for Miles Davis's Kind of Blue, Sketches of Spain and Someday My Prince Will Come albums.

Located in the heart of Seattle's historic district in Pioneer Square,the Penthouse jazz club was opened in 1962 by Charles Puzzo, Sr., and quickly became a destination for iconic jazz talents such as John Coltrane, Oscar Peterson, Stan Getz and The Three Sounds to name a few. Well-known radio personality,Jim Wilke, developed a working relationship with this legendary club, which in turn allowed him to air live broadcasts from the club every Thursday night using state-of-the-art equipment of that era. His weekly radio show, Jazz from the Penthouse, aired on Seattle's NPR affiliate, KING FM from 1962 through 1968, and has never been rebroadcast. When executive producer George Klabin learned of these recordings, he couldn't believe his good fortune to come across this thrilling 1960s material of Wes Montgomery with Wynton Kelly.

Producer Zev Feldman says, "The association between Wes Montgomery and Wynton Kelly is a critical part of the Montgomery legacy. Resonance has been releasing only the guitar icon's material from the 1950s thus far, so it's very exciting for us to be moving into Wes's 1960s discography with this incredible addition to the Montgomery canon from a cherished era. It's also the only known recording known of Wes and Ron McClure together, which I think is also cause for celebration. As usual, we've gathered all the rights to make it official and have created a dynamic package worthy of this timeless music."

"The experience of playing with those guys was like being baptized," says Ron McClure in his liner notes essay. "The music was joyous. It was buoyant. It was happy; positive - like they were as people."

By the time the 1966 Wes Montgomery with the Wynton Kelly Trio gig rolled around, Wes was on top of his game. His album Goin' Out of My Head (Verve) had shot up the Billboard R&B charts to No. 12, and within a year, the album would garner a 1967 GRAMMY® Award and sell nearly a million copies. At the ripe age of 43, Wes was at the pinnacle of his career. And just one year later, he would no longer be with us.

Wynton Kelly first collaborated with Wes Montgomery in 1962 with their album Full House (Riverside), also with Jimmy Cobb on drums (McClure joined Wynton Kelly's trio a few years later in 1965, replacing Paul Chambers), followed by the legendary Smokin' at the Half Note . And now we have Smokin' in Seattle, a new chapter in the storied collaboration of these two jazz giants.

Modern day jazz guitar icon Pat Metheny writes, "The news that another example of that band in action had surfaced was headline news for those of us in the hard-core Wes community. The incredible revelations contained in Resonance's previous releases of Wes's early work have been thrilling. This release adds yet another dimension to the almost impossibly brief ten years that Wes was the jazz world's most renowned guitarist, particularly to completists like me who want to hang on to and cherish every note Wes played."

This 10-track album is indeed a "smokin'" musical exchange between Wynton and Wes, swinging with fire-cracker energy. The Wynton Kelly trio opened each set of the 9-night engagement with a couple of tunes before Wes joined them on stage. The album opens with "There Is No Greater Love," an upbeat rendition of Isham Jones's well known jazz standard. Wynton glides through seven choruses filled with his trademark lyrical legato lines, with bluesy twists and turns along the way. His joyous playing is apparent from the start. In an interview with Kenny Baron included in the liner notes, he says, "Wynton was kind of in a class by himself. His touch, his feeling, his sense of time, sense of rhythm… For me it was just very, very unique." Often underappreciated as a player, despite his years with Miles Davis, Wynton remains an iconic figure, for jazz fans and next generation of jazz players.

Jimmy Cobb remembers the band fondly, "Wes was a nice guy, man. He was a very comedic kind of guy. Like he would say funny things and do funny things…But he was a sweet guy. Wynton was also a sweet guy. So we all got along together pretty good. And the playing was exceptional for the four of us."

With the support and friendship of the Puzzo family and Jim Wilke, Resonance is proud to bring this remarkable, previously unknown recording to the public, now the second release in a series of Resonance releases recorded at the Penthouse, following the 2016 album, The Three Sounds featuring Gene Harris - Groovin' Hard: Live at the Penthouse 1964-1968 .

Previous Wes Montgomery releases on the Resonance label include rare historical discoveries from Wes captured in the 1950's, before his ascension to icon status -Echoes of Indiana Avenue (2012),In the Beginning (2015) and One Night in Indy (2016). The label is thrilled to add Wynton Kelly to their musical library and give him the royal treatment he so deserves.
The limited-edition, hand-numbered LP pressing on 180-gram black vinyl will be released exclusively for Record Store Day's event on April 22, 2017. The LP version has been mastered by the legendary Bernie Grundman at Bernie Grundman Mastering and pressed at Record Technology, Inc. (RTI), and features the same liner note material as the CD version.


You can located order information by visiting www.resonancerecords.org.