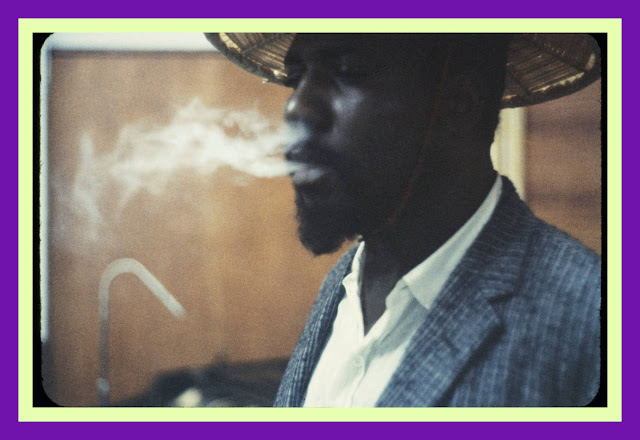 The following piece by Larry Blumenfeld appeared in the June 10, 2017 edition of the Wall Street Journal. More of Monk’s recorded music is always a treat, but I was particularly excited about the release of this music because it features Monk’s short-lived association with the rhythm section of Sam Jones on bass and Art Taylor on drums. Given the space that Monk gives to a rhythm section, it’s always interesting to listen to how they do their thing in terms of laying down a pulse for Monk Music.

Earlier that year, Sam and Art had participated in the February 28, 1959 NYC Town Hall performance of Monk’s music as scored for a larger group by Hal Overton.

I was also intrigued by Paris-based tenor saxophonist Barney Wilen’s appearance on some tracks along with Charlie Rouse who was on the front-end of a 10-year association with Monk in the tenor sax chair of Thelonious’ quartet.

“Pianist Thelonious Monk was born in Rocky Mount, N.C., on Oct. 10, 1917. The centenary of this moment will likely inspire a wave of celebratory concerts and recordings. Since Monk’s death, in 1982, the influence of his compact body of compositions has grown with each passing decade; once considered radical, they are now as elemental to modern jazz as are Bach’s to classical music. The characteristics of his piano playing — jarring rhythmic displacements, clotted chords, flat-fingered runs and spiky dissonances — still sound distinct even as they shape our ideas of contemporary music’s possibilities.

The first commemoration of Monk’s centenary comes early, a posthumous gift from the master himself. Thelonious Monk: Les Liaisons Dangereuses 1960 (Sam Records/Saga), available as a deluxe double-CD or LP set, contains Monk’s studio recordings for the soundtrack of Roger Vadim’s French film of the same name. This music has never been available outside the context of the film. The master tapes of Monk’s soundtrack were discovered in 2014, in the archives of Marcel Romano, the French promoter who introduced Vadim to Monk’s music. Romano, who had brought Miles Davis to director Louis Malle to score “Ascenseur pour l’échafaud,” also managed French tenor saxophonist Barney Wilen, who here joined Monk’s quartet for several takes.

Vadim’s adaptation of Pierre Choderlos de Laclos’s 18th-century novel embraced a story of bourgeois infidelity and seduction as transposed to 20th-century France, with a jazz soundtrack. (Cocktail-party scenes featured Duke Jordan’s tunes played by Art Blakey and the Jazz Messengers, later released on the Fontana label.) Though commercially successful in France, the film is memorable now mostly for its nudity and risqué tone. Monk’s music—recorded in Manhattan, in the summer of 1959—is, however, timeless musical expression that documents a significant moment.

The list of classics recorded in 1959—as transformative a year as jazz has known—includes Miles Davis’s “Kind of Blue,” John Coltrane’s “Giant Steps” and Ornette Coleman’s “The Shape of Jazz to Come.” It was also a heady time in Monk’s career. Months earlier, he had played a landmark large-ensemble concert at Town Hall. His working quartet had just recorded a fine album with cornetist Thad Jones and, shortly before this soundtrack session, had played the Newport Jazz Festival to rave reviews. This quartet, excellent though short-lived, included bassist Sam Jones, drummer Art Taylor and tenor saxophonist Charlie Rouse, who had just begun a decade-long association with Monk.

Yet as Monk’s biographer Robin D.G. Kelley observes in an insightful liner note, Vadim had “approached Monk at the absolute worst time.” A dizzying professional schedule along with some setbacks, especially the loss of his cabaret card following an unjust arrest, had left Monk in the grip of severe emotional instability. He was, as Mr. Kelley writes, “overcommitted, tired, and ill.” Thus, Monk wrote no new compositions or arrangements; these tracks seem more the stuff of a jazz-club performance or record date than a movie score.

Still, Mr. Kelley writes, “Monk chose the repertoire based on his understanding of the story, and played around with the tempos in order to capture the character’s emotional state or circumstance.” Indeed, the always-inventive Monk here emphasizes the emotional content of his music. A version of “Crepuscule With Nellie,” used for opening credits, contains noticeably pregnant pauses. Four versions of “Pannonica,” two as solo piano, reveal subtly shifting shades of feeling. For a scene in which the innocent Marianne and her seducer, Valmont, meet in a church, Monk, perhaps as irony, played a straightforward version of the Rev. Charles A. Tindley’s hymn “By and By (We’ll Understand It Better By and By),” which he likely learned as a teenager while playing for a traveling Pentecostal preacher.

Nothing sounds revolutionary in these tracks, yet they reveal Monk during a dynamic year, in the midst of turmoil, seeming relaxed, playful and at the top of his game. His version of “Well, You Needn’t” bristles with the particular energy afforded by this brief rhythm-section alliance with Jones and Taylor. “Rhythm-a-Ning” is notable for Monk’s differing interplay with each saxophonist. An improvised blues, originally untitled, listed here as “Six in One,” sounds like a sketch of what Monk recorded three months later as “Round Lights.” Here also is the only known studio recording of Monk’s “Light Blue” (two versions, in fact). On the second, a 14-minute version credited as “Light Blue (Making Of),” Monk implores Taylor, against his protestations, to “keep on doing what you’re doing”—to extend a three-beat pattern that forms a countermelody. Whether Monk was thinking about advancing Vadim’s cinematic tale or simply telling his own story is anyone’s guess."

—Mr. Blumenfeld writes about jazz for the Journal. He also blogs at http:// www.blogs.artinfo.com/blunotes.