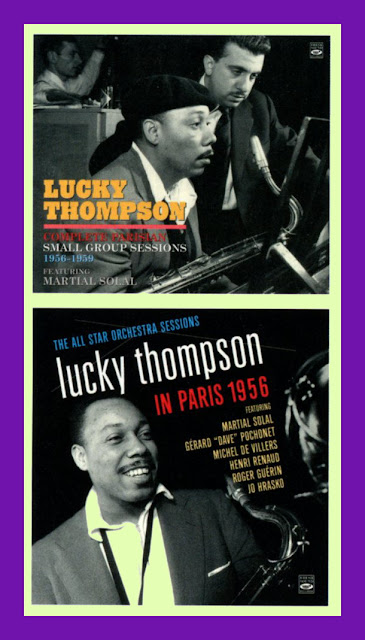 Here’s another of our promised blog features on Downbeat’s 2017 gifts-of-the-season recommendations.


“Tenor saxophonist Lucky Thompson (1924-2005) worked in some of the most famous jazz orchestras of the 1940s and early '50s, playing in big bands led by such swing icons as Billy Eckstine, Lionel Hampton and Count Basie. He was one of the first African Americans in Boyd Raeburn's legendary orchestra. Thompson often found himself on the bandstand situated in proximity to such future giants as Charlie Parker, Dizzy Gillespie, Art Blakey, Charles Mingus, Leo Parker and many more. According to jazz critics of the time, Thompson was in the same league as these extraordinary gentlemen, garnering comparisons to modern jazz pioneers such as Ben Webster, Coleman Hawkins and Lester Young in the pages of publications like DownBeat and Esquire.


But the intriguing thing about Thompson was that he clearly didn't suffer fools gladly. His quickness to call out club owners or music industry executives who did him wrong earned him a reputation for being difficult, costing him gigs both at clubs and in the studio.


Tired of petty politics, Thompson relocated to Paris in 1956, where he would spend the remainder of the decade honing his craft in the small-band format with some of the hottest players in French jazz. He frequently collaborated with pianist Martial Solal, and he worked with a rotating combo consisting of such young Parisian lions as guitarist Jean-Pierre Sasson, bassist Benoit Quersin and drummer Gerard "Dave" Pochonet. He also shared the bandstand with fellow American expats, like trumpeter Emmett Berry, drummer Kenny Clarke and pianist Sammy Price.


Recorded in mono, the four-disc set Complete Parisian Small Group Sessions 1956-1959 - Fresh Sound Records; www.freshsoundrecords.com - documents Thompson's transition from a blacklisted freelance musician in the States to one of the most respected and in-demand leaders on the Parisian scene. His work in the quartet and quintet formats allowed him to explore the feather-light intimacies of melody, rhythm and texture, expressing himself in a way that would have been difficult, if not impossible, in a big band.


For fans who prefer to hear Thompson in the throes of a large ensemble, there's a companion disc, Lucky Thompson In Paris 1956 (Fresh Sound Records), which shines a light on the saxophonist's All Star Orchestra Sessions. On the first of these sessions, Thompson joined the 10-piece Modern Jazz Group to play five compositions written by pianist Henri Renaud (including "Meet Quincy Jones") and arranged to highlight the newly arrived saxophonist. For the remaining three sessions, Thompson and Pochonet co-led medium-sized all-star groups that played originals like Sasson's "Portrait Of Django" and Thompson's "Still Waters," as well as an arrangement of Count Basie and Neal Hefti's "Bluebeard Blues."


The pleasures of hearing this unsung tenor master overcome the dogma of his homeland and reinvent his legacy as a leader makes these reissues a revelation, especially if you are a fan of the embryonic stage of modern jazz.


Moreover, Thompson's life story illustrates a vitally important lesson: If you are true to yourself and to your beliefs, despite the forces of oppression in your vicinity, you might find another place in this world where behavior once perceived as difficult is considered dynamic.”