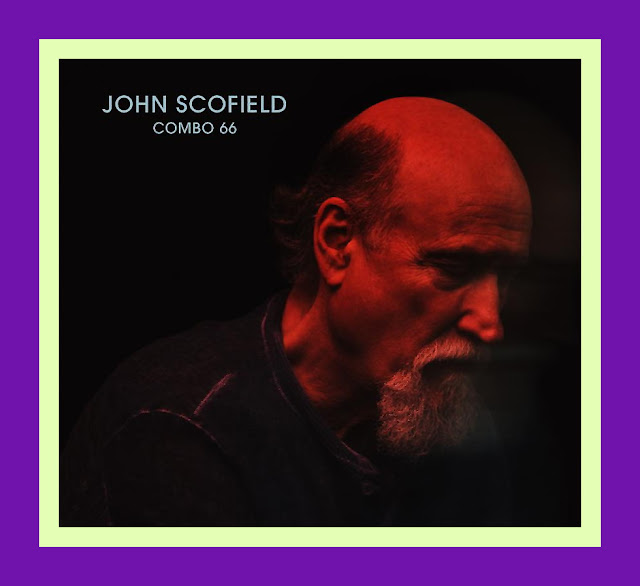 
We received the following from Crossover Media and thought we’d share it with you. John has always been one of my favorite, especially when Bill Stewart is in the drum chair, and we are curious to hear Gerald Clayton as the latest member of John’s group on keyboards as he has always knocked me out on piano with the Clayton Brothers band.


A YouTube track from the recording is featured at the end of the text.


In 2017 Scofield joined forces with old pals Jack DeJohnette, Larry Grenadier and John Medeski for the rural New York jazz band of the ages, Hudson, the quartet romping the world from Boise to Berlin and back again.


John Scofield keeps his talent and his trusty Ibanez AS200 guitar burning brightly on Combo 66, which finds the New York native with a new quartet and fresh compositions in celebration of his 66th birthday.


"I wrote all new tunes for this record, Combo 66," Scofield notes from the road. "I called it that because I'm 66! And 66 is the coolest jazz number you can get because if you hit 66 you're doing ok. Remember all the great records from the 60s? Brasil 66. 'Route 66.' It hit me that it would be poetic to use that title."


Born of searing groove, soul-touching melody, and kinetic improvisation, Combo 66 swings effortlessly to the condor-like rhythms of drummer Bill Stewart, Scofield's percussionist since 1992s What We Do. Scofield chose upright bassist Vincente Archer of Robert Glasper's Trio when it came to bass rhapsodies and called upon 34-year-old organist/pianist Gerald Clayton, son of bassist John Clayton of the Clayton-Hamilton Jazz Orchestra for keys.


"Guitar and keyboard is not always the easiest match," Scofield says. "Because of its percussive nature, piano is very similar to the guitar. But Gerald has a beautiful touch and though he is quite modern, his touch reminds me of Hank Jones or Tommy Flanagan. And that really is a beautiful legato sound that works well with guitar. Even though he's got super roots in traditional jazz, he can do everything. I'm just thrilled to play with Gerald."


The album begins with a track called "Can't Dance" - we're not talking the Sinatra standard, but a late afternoon swinger imbued with a sense of urban danger. "It just has this kind of groove quality and since I can't dance, really, I thought I would dedicate it to myself," Scofield laughs.


"Combo Theme" recalls the spooky grandeur of a great Henry Mancini soundtrack melody, balanced by Scofield's wry guitar solo, the equivalent of a Hollywood noir thriller, while the track "Icons at the Fair" plays on chords and progressions of Herbie Hancock and Miles Davis.


"We really got some heat happening on this one," Scofield says of "Icons at the Fair." "Years ago, I did a record and a tour with Herbie Hancock, for his album, The New Standard. He had this arrangement of 'Scarborough Fair' and I really liked the chords. I used those chords and then wrote a melody which was reminiscent of a lick that Miles [Davis] used to play. So, between Herbie and Miles and Paul Simon's 'Scarborough Fair' I called this 'Icons at the Fair."


The conversational "Willa Jean" was titled for Scofield's granddaughter, followed by "Uncle Southern," a light-stepping ¾ dance which touches on his mother's Southern roots. "Dang Swing" is a swing tune with a bit country: a dab of the devil's music and "New Waltzo," melds waltz with rock.


Something he almost never does, "I'm Sleepin' In" is a ballad - a calming yet slightly mysterious number titled, as is most every track on Combo 66, by Scofield's wife, Susan Scofield.


"It's quiet and pensive, and I hope, sensitive," Scofield explains. "Susan's title seemed to reflect the feeling of the song. What's more sensitive than a human being when they're asleep?"


Combo 66 closes with the track "King of Belgium," dedicated to Belgian harmonica maestro, Toots Thielemans, a man of great humanity, and purportedly, a great sense of humor.


"If you can't have fun with the music, let's go home," Scofield says, alluding to his working credo. "I am so deadly serious about jazz, but the fact of the matter is jazz only works if you are relaxed and don't give a shit. If you try too hard it doesn't work. Humor really helps me to get to a better place with music."”