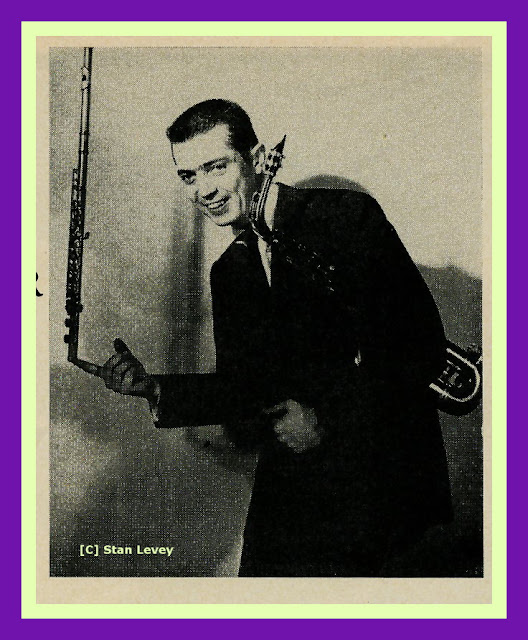 One of the more enjoyable dividends of writing this blog is searching through the Jazz literature for content, especially material that provides a focus on some of my Jazz heroes at the outset of their careers.

It’s fun looking back to a time when the World was young and when it all began with energy and enthusiasm.

Lately, my journey of journalistic discovery has taken me to some mid-20th century issues of Metronome. The magazine began publishing in 1881 and its initial focal point was marching music [and musicians]. It later progressed to the dance bands of the Swing Era, and the post World War II development of small combo Jazz before closing its doors in 1961.

Bud Shank [1926-2009] was one of my enduring Jazz heroes and because we were both resident on the Left Coast, I had the opportunity to hear him perform in person on a number of occasions and it a variety of settings.

But the musical setting described in the following article by Fran Kelley in the February, 1956 edition of Metronome was before my time.

“So with his mustache gone and a new horizon rainbowing his shoulder, Bud Shank is the happiest these days. Opening at the Haig in Hollywood with his new quartet and after a month ready to hit the Eastern circuit, Bud feels that 1956 will be his year. And Claude Williamson, equipped with his great pianistic and compositional talents will be with him. For this Bud is grateful. The two of them have worked together since 1947. And this consequential musical sympathy plus the added zest of two comparative newcomers from San Francisco, [drummer] Gus Gustafson and [bassist] Max Hartstein proffer prospects for a successful swinging group. They will be recording an album while at the Haig for Pacific Jazz.

Bud says that they plan to stay out as long as they can. He's kind of anxious to get back East, not having been there to work for four or five years. There is no particular new-sound signaling here. "Just to play as good music as possible." "Decided we can get the variety of sound necessary with Claude's accomplishments and the use of flute and alto. It's hard to keep the sound of a quartet from being monotonous but I think we have licked this problem. Claude will do the greater part of the arranging. I will do the things for flute of course. You have to be specially careful about the material used for this instrument. We have no set idea in mind, just create good music." I asked him how he felt about being named in the Poll for flute. He said he was quite surprised, and although he would rather be identified with alto saxophone, it was indeed an honor to be named First Anything.

Quotes: You mentioned you would rather be rated as the first alto player . . . I mean . . . what's the matter with flute?"

"It's just that I feel that jazz is the reason for the saxophone existence, and that's what I am. A jazz alto player, not a jazz flute player, primarily."

What do you think of the Saxophone Quartet of Paris?

"It's nice. But I would rather hear a woodwind quartet. The sound isn't what I would like ... as far as legitimate music is concerned."

Bud started playing clarinet at ten, saxophone at thirteen, majored in music at die University of North Carolina, studied with various teachers and recently composition with Shorty Rogers. This for two years. His hobby is sports cars. Would like to build one some time. Interested in horses as a little boy. Grew up on a farm. Goes back every year. As a little boy wanted to be a farmer. Until he heard music. Said his family was musical in a way. I asked him what kind of music: "Oh ... I don't know . . . something like Look Out Kayser Bill (or When Frances Dances with me Hully Gee). Yeh, that's it. That type of music."

"It's got to be Count Basie . . . that's since adolescence up until now and probably will for the next twenty years!"

Bud is there anything that displeases you jazzwise these days?

"Yes! There is a tremendous leaning towards a sort of pseudo-intellectual too-cool approach. And this you might say is great in some ways . . . because it's done a lot for business. It's done a lot to bring people, who have classed jazz as something vulgar, to listen more, open their minds. But, still, groups that base their entire thing with this in mind, I think are losing the basic part of jazz, which to me is: it's got to swing! and without developing or making use of emotion, well to me it's entirely useless, except as an economic thing."

Well do you think it's because they are afraid of their own emotion?

"It could be, they just don't have any. That's all I can say. I don't know. It seems they never get down to good emotional funky type of swinging. They never seem to bother to get around to it. It's the same constant sound, appealing to the people with six buttons up and down their coats and striped vests and that click. It's very nice. But where's the music? To me, it's just not honest."

You mean it's not honest jazz?

"Well it's not honest music. And that's what jazz is. It's got to be honest or it isn't jazz-music. Using another terminology, they're a little bit too cool in their ways of thinking. But there is an audience for this type as proved by the success of a few of these groups. But still, they're . . ."

"Yeh, that's it ... there is no warmth, no emotion, no nothing. It could all be written out and it would be the same. No spontaneity. To me all the things that are important to a good jazz group are lacking here!"

Bud as a final question and an important one, do you feel there is any one particular phase of musical education that is important to young musicians?

"I feel that all parts of music, knowledge and study of their instrument, composition, tone development, everything and anything to do with music is important. A well rounded, complete education is of greatest importance."

(Sounds pretty sound to me, coming from a guy who's swinging success is based on sound itself.)”

Prior to the formation of his quartet with Claude Williamson, both Bud and Claude worked in bassist Howard Rumsey's Lighthouse All-Stars and you can hear them performing "Maid in Mexico" recorded in performance on 9.13.1953  on the following video along with by Chet Baker and Rolf Ericsson [tp], Bob Cooper and Jimmy Giuffre [ts], and Max Roach [dr].