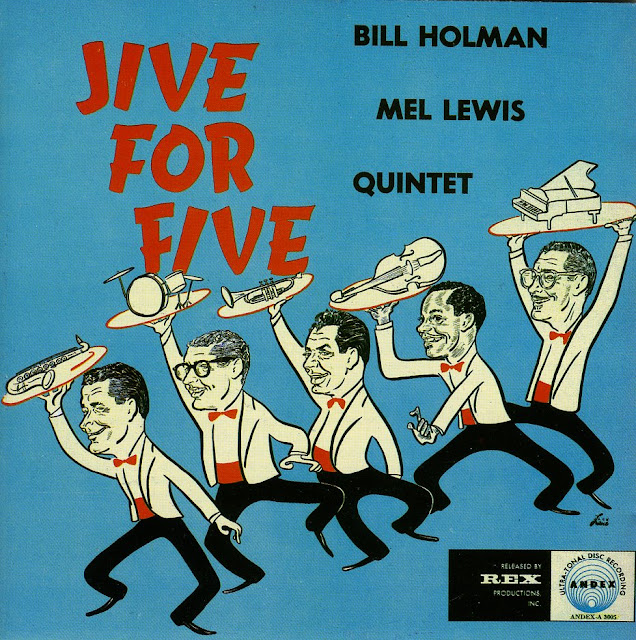 Andex Records was one of those boutique labels that popped up now and then to produce a few Jazz recordings by up and coming Jazz artists. In many cases, these “start-up’s” gave newly formed groups their first public exposure [and sometimes their last as in many cases both the groups and the labels were “here-today, and gone-tomorrow”].

Andex was one of the various labels used to issue recordings produced and owned by Rex Productions which was owned and operated by the Siamas Brothers, John and Alex.

They started the label in 1957 working with producers Bumps Blackwell and Bob Keane and were fortunate enough to have a hit right out of the gate with vocalist Sam Cooke’s You Send Me. For more details on the label/s go here.

Based in Los Angeles, CA, Andex produced a half dozen recordings by musicians local to the area including Bill Holman, Mel Lewis, Art Pepper, Conte Candoli, Jimmy Rowles, Dempsey Wright and John Graas. All of these LP has been subsequently released as CD’s by V.S.O.P. Records.

Given the many big band accomplishments that both drummer Mel Lewis and tenor saxophonist, composer- arranger Bill Holman would have over their long and distinguished careers, I would imagine that few Jazz fans even remember the short-lived quintet they formed together in 1957.

Bill and Mel were on the Kenton band together in the 1950’s and John Tynan, who was for many years the West Coast editor of Down Beat magazine picks up the story from there in the following liner notes that he wrote for the LP. 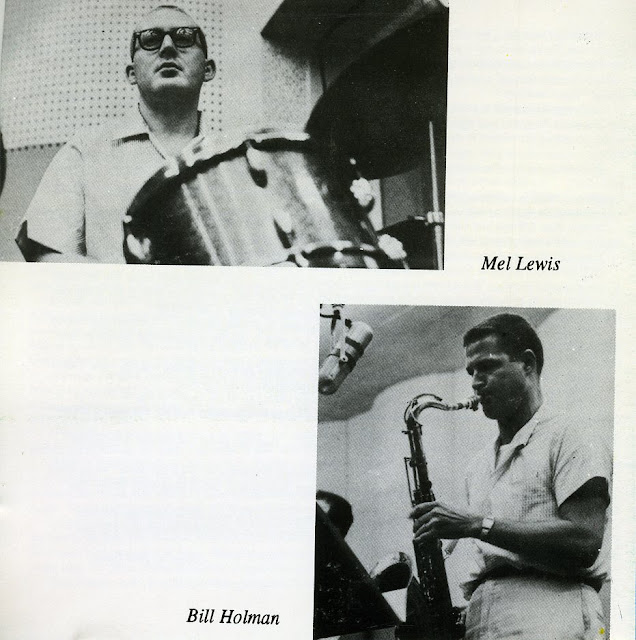 To this West Coast Dynamo Club must unqualifiedly be added Willis "Bill" Holman and Mel Lewis. Not only is Holman a saxophonist of force and intelligence—he's a pretty funky composer-arranger too. Lewis, a voluntary emigre from Buffalo, New York, is a deep-grooving drummer whose deity is Time.

Thrown together originally in the maelstrom of the Stan Kenton orchestra of the early '50's, the saxman and the drummer have long yearned for the freedom to relax and stretch in a small jazz group tailored to their concurrent musical ideas.

"I wanted a group and so did Bill," Lewis explains. "We realized that in working together, we stood a better chance of making it than if each took off by himself. With both of us sharing the headaches, we figured it would be much easier. And it is."

After six months, the partnership is a success. Not only is Holman (31) a wailer on either tenor or baritone sax; a brighter blessing is his remarkable talent for writing jazz for bands big or small. Moreover, Holman is growing as a serious composer. An earlier long work for small jazz group, Quartet has been recorded by Shelly Marine and His Men. In this album a further example of his extended writing for small ensemble is the title number, Jive for Five.

29-year-old Lewis is the rhythmic power plant of the quintet. According to partner Holman, "Mel is becoming quite at home in a small group. For one thing, he feels much more at ease in long solos. There's more continuity in his playing. While he catches a lot of figures played by the horns just as he would in a big band, there's a different feeling involved, too. The hard swing remains, but in the small group he's thinking in more musical terms. He's becoming more a part of the front line than a percussion section."

Although the third Kenton alumnus in the quintet, trumpeter Lee Katzman, has "... worked with more bands than I can remember," he is only lately gaining widespread recognition as a first-rate jazz soloist. A Chicagoan by birth, Katzman, now 30, joined the Kenton band in January 1956. He left in the spring of this year [1958], ". . . just in time not to go on the road."

"This album is the happiest I've ever made," Lee enthuses. "That piano player. . . And the music! It's got an awfully good feeling. It's really a pleasure to play with Bill because we have the same feeling for time."

"Walkin" Willie" Middlebrooks has been plucking plaudits on the West Coast with his impressive bass playing. A come-lately westerner, the 25-year-old Chattanoogan settled in Los Angeles in 1955 after coasting with the band of altoist Tab Smith with whom he had worked before entering the Army in spring of 1953. Of the album he comments, "Everybody played so good, but Jimmy Rowles really gassed me."

Jimmy Rowles, 40. has been gassing musicians and fans since he got his start in jazz with the great Ben Webster in the late 30's. Rowles' work with the greatest big bands parallelled their heyday in the '40's. Famed for his repertoire of thousands of tunes, Jimmy suggested the quintet record both Liza and the magnolia scented Mah Lindy Lou. 502 Blues Theme is Rowles' composition and arrangement.

Both Holman and Lewis believe their group is different, a fact immediately evident to the ear.

"Basically," says Bili, "the difference lies in the conception. In the past most so-called 'West Coast' recordings groups were pickup bands, put together for the date and then forgotten. Most musicians engaged in these sessions felt it was better to concentrate on the writing, there being little opportunity to put soul in the blowing." Hence, contends Holman (himself a native Southern Californian), the resultant music, distinct in character, came to be labeled "West Coast Jazz."

The composer is quick to point out, however, that even during this spate of pickup band recording, there were jazz groups on the West Coast who, by virtue of steadily working together, developed a unified conception and sound, permitting the soloists to step out and wail. The Holman-Lewis Quintet is the latest example of such combo unity.

Remarking that"... the sound of trumpet and tenor is one of my favorite sounds," Holman admits this instrumentation" ... is a little harder to sell to the "fringe jazz people." These listeners as a general rule tend to favor the unusual and exotic in instrumentation." He smiles. "Sorry, but we can't give 'em that. We feel we might as well say what we want the way we want."

In sum, then, Bill and Mel conceived and are employing the quintet as a cohesive unit playing unified compositions, yet with plenty of room left the soloists for free, extended jazz blowing. …

Soon to be released on Andex is a big band set of his compositions [In A Jazz Orbit Andex 3004; V.S.O.P. 25] which promises to outdo any previous Holman big band effort. It goes without saying that the gentleman in charge of rhythmic propulsion (big band department) is brisk jazzman Mel Lewis.”