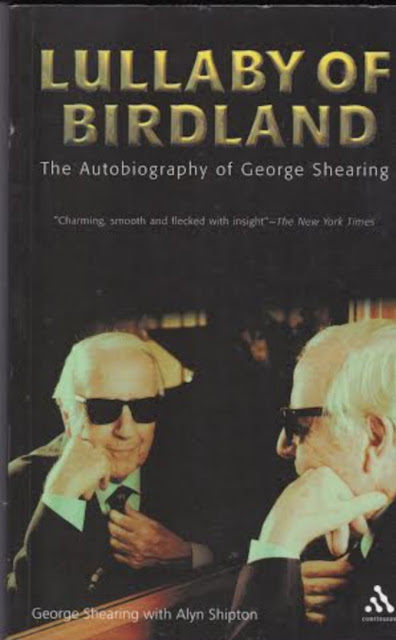 Jazz clubs were always a mixed blessing for the music and its makers. They were, for the most part, unhealthy environments: smoke-filled rooms that pedaled booze. But ever since its inception, clubs had been where Jazz musicians went to make a living.

But leave it to George to write a lullaby to one.

“In 1952, Morris Levy, who owned Birdland, which had opened on the site of the Clique, came to me and said they were about to start a regular disc jockey show sponsored by the club. The club was at 1678 Broadway, at West 44th, a few blocks south of 52nd Street, and it's been built up so much in jazz legend by people with vivid imaginations that you might think it was a huge palatial place. In fact it was just a little jazz club, not very different from those on the Street itself, that held around 150 people, 175 at the most.

Nevertheless, its fame had spread much wider than the immediate area, because it had had a wire in there for broadcasting almost since it opened back in 1949. Mostly, those radio shows had been eavesdropping on sets by whatever band was playing there, but now the local WJZ station in New York was going to take this new disc jockey program, sponsored by Birdland, and running from 11 p.m. for up to six hours every night, as well as featuring some of the bands playing there.

Morris wanted me to record a theme, to be played every hour on the hour, and he sent the music to me. It wasn't much good, and so I called Morris and said, "Look, I can't relate very well to this theme you've sent me, why don't I write one for you?"

He was immediately on the defensive. He said, "I'll bet you'd like to write one, because you have your own music publishing company, haven't you?"

He figured that if the show was a success and the tune was played every night, then the rights would add up to something worth having. But although I had set up my own publishing firm, that wasn't actually the reason I didn't want to record Morris's song. It just wasn't very good. So I said to him, "The reason I want to write a tune is so that I can feel comfortable about playing it."

"Well," he came back with, "we would feel comfortable about you recording a tune that we own."

So I suggested a compromise. I said, "Okay, I'll give you the publishing rights, but I'll keep the composer's rights."

As it turned out, [my wife] Trixie wasn't too happy with this decision. She was running my music publishing company  — indeed there were eventually three companies, including one for ASCAP and one for BMI — and she really thought I ought to have kept all the rights for myself. But to start with, that was hardly a problem, because writing the tune wasn't quite as straightforward as I had expected. I sat down and wrote something, but when I played it to Trixie, she said, "This is terrible."

So for two days I thought the thing over. For some reason my mind went blank and although I wanted to write a song, I just couldn't think of anything. Finally I got to the point where I thought there was nothing for it but to send in the piece I'd written that Trixie reckoned was so awful.

That night, at our house in Old Tappan, New Jersey, where Trixie and I had moved not long before all this happened, I was sitting down to dinner, my favorite char-broiled steak. I'd just started to eat when I jumped up.

That night there was nothing wrong with the food. I rushed over to the piano and said, "How's this?" I sat down and played right through Lullaby of Birdland. It just came to me, the whole thing, just like that. Within ten minutes I'd got the entire song worked out. Since then I've been back to the same butcher several times and asked him if if he could manage a repetition of that steak. Actually quite a lot of my compositions have come this way — very slow going for a week or so, and then the finished piece comes together very rapidly, but as I say to those who criticize this method of working, it's not that I dash something off in ten minutes, it's ten minutes plus umpteen years in the business.

It sounds rather flippant to say that, to justify why I can write something so quickly which will come out as a piece that people remember. I'm not pretentious enough to have thought from the outset, "I knew they were going to remember that song," but there's undoubtedly a catchiness in that opening phrase that people identify with me. "Oh, Shearing," they think — in other words, musically they know how to spell my name.

By contrast, I have to say that I observe a number of today's jazz musicians who are attempting to compose without much knowledge of jazz history. They don't know how it all started, and even some of those who do, don't really care. They take the attitude that, "This is what I want to do, and these are the few chords that I want to play to do it." My response is that if they took the trouble to listen to Teddy Wilson, Fats Waller, Art Tatum, and Coleman Hawkins, or to study wonderful orchestrators like Fletcher Henderson, Sy Oliver, and Bill Finegan, they'd have a much deeper grounding in music in general and jazz in particular.”

That grounding has allowed me to record numerous different treatments of Lullaby of Birdland over the years. I've played it so many times that it is possible to get quite tired of doing so — although I never tire of being able to pay the rent from it!””