Conrad Herwig - "Sketches of Spain Y Mas: The Latin Side of Miles Davis" 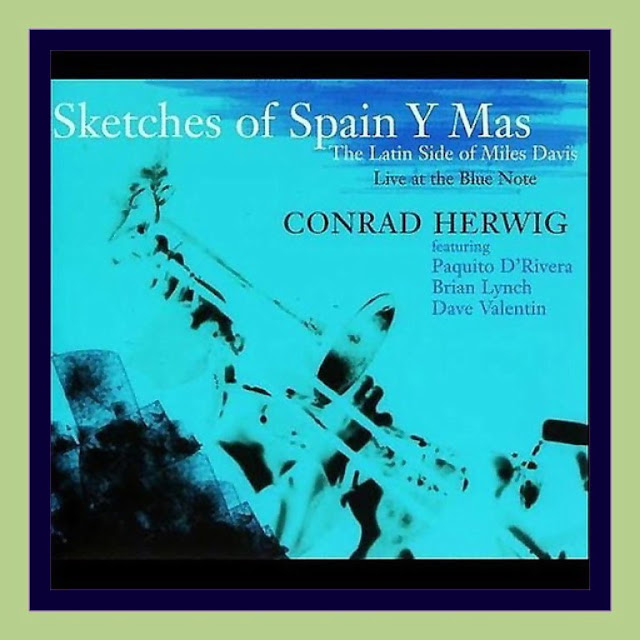 I try to keep the topics for the blog postings somewhat spontaneous.  All of them require a certain amount of technical planning for obvious reasons and some involve lengthy research, but sometimes while perusing my music collection I come across something that I haven’t listen to in a while and this provides a subject or a theme that forms the basis for the next blog feature.

Book reviews, CD reviews, concert coverage, re-publications, in-depth profiles of favorite Jazz musicians, interviews - all have found their way onto these pages - but I must admit that there’s nothing quite as satisfying as an impromptu rendezvous with a favorite piece of music that I can turn into a video to accompany a brief posting about “recent listening.”

Perhaps it is the improvisational nature of the process of discovery that relates to how Jazz is made that intrigues me.

Whatever the case, I’ve been a big fan of trombonist Conrad Herwig’s “Latin Side of” recordings for many years. It is great fun to listen to the compositions of Miles Davis, John Coltrane and Wayne Shorter, among others, in a Latin Jazz setting.

Must be the drummer in me.

The idea for the video that concludes this piece came to me while listening to Petits Machins the concluding track of Conrad’s Sketches of Spain Y Mas: The Latin Side of Miles Davis [Highnote 4530].

Petits Machins, which translates from the French as “Little Stuff,” more properly belong to the “Y Mas” portion of the CD as the original performance of the tune is on Miles’ Filles de Kilimanjaro.

Thematically, I decided on Netsuke to visualize the Little Stuff aspect of the music.

Netsuke are miniature sculptures that were invented in 17th-century Japan to serve a practical function (the two Japanese characters ne+tsuke mean "root" and "to attach"). Traditional Japanese garments — robes called kosode and kimono — had no pockets; however, men who wore them needed a place to store their personal belongings, such as pipes, tobacco, money, seals, or medicines.

Their solution was to place such objects in containers (called sagemono) hung by cords from the robes' sashes (obi). The containers may have been pouches or small woven baskets, but the most popular were beautifully crafted boxes (inrō), which were held shut by ojime, which were sliding beads on cords. Whatever the form of the container, the fastener that secured the cord at the top of the sash was a carved, button-like toggle called a netsuke.

Bill Milkowski, a regular contributor to Jazz Times and Jazziz magazines offers the following description of the context and the music that appears on Conrad’s nontet recording of Sketches of Spain Y Mas: The Latin Side of Miles Davis [Highnote 4530].

“It was back in March of 2003 that trombonist-bandleader Conrad Herwig brought a stellar nine-piece ensemble into the Blue Note for a weeklong engagement billed as "The Latin Side of Miles Davis." Three nights were recorded, subsequently yielding 2004's Grammy-nominated Another Kind of Blue, documenting the group's reinvention of Miles' landmark work from 1959, Kind of Blue, within the framework of Afro-Cuban and Afro-Caribbean rhythms. Volume 2 focuses on another Miles masterwork, Sketches of Spain, his stunning 1960 orchestral collaboration with Gil Evans that has remained an enduring jazz classic.

The centerpiece of this vibrant live outing is a stirring, 25-minute Sketches of Spain suite that incorporates Rodrigo's "Concierto de Aranjuez" with elements of the Gil Evans compositions "Saeta" and "Solea." Following an opening flurry of churning Afro-Brazilian hybrid rhythms, guest soloist Paquito D'Rivera settles into a marvelous clarinet improvisation over the hauntingly beautiful Rodrigo theme. Herwig follows with an expressive trombone solo, eventually delving into multiphonics as the band drops out. Percussionist Richie Flores then explodes with a whirlwind, unaccompanied conga solo that lights up the bandstand. Trumpeter and co-musical director Brian Lynch makes a beautiful homage to Miles with his mellow Harmon mute solo on this dramatic Rodrigo passage, then switches to bold open horn playing for the trumpet call on Gil's "Saeta." D'Rivera returns for a sensuous alto sax solo over the moving "Solea" section, followed by some exceptional playing by the exciting young Puerto Rican pianist Edsel Gomez, who runs the gamut from classical introspection to turbulent, Cecil Tayloresque abstraction in the course of his dynamic and unpredictable solo.

The Y Mas portion of this inventive Afro-Latin collection includes an infections and eminently danceable son montuno of the classic Miles vehicle "Solar," a kinetically-charged jazz mambo rendition of "Seven Steps to Heaven" (the title track to a 1963 Miles recording) and a concluding percussive blowout on "Petits Machins" (from Filles de Kilimanjaro) that turns both drummer Robbie Ameen and conga maestro Flores loose for some heated Afro-Cuban jamming.

The music from Sketches of Spain is not something that you would normally find in a Fake book on the campuses of North Texas State or Berkeley College of Music. In fact, it's very rarely ever played by working jazz ensembles. "Never before had I ever had a chance to improvise on those forms," says the world class trombonist who apprenticed in big bands led by Buddy Rich, Clark Terry, Toshiko Akiyoshi and Mel Lewis and also spent the past 20 years working with master salsa musician Eddie Palmieri. "It's not lead sheet type tunes that we're playing here, but rather we're using the themes as a vehicle for improvisation. So playing this music gave us a chance to freely express ourselves, to use different textures and put our own slant on it."

Interpreting Miles' music through an Afro-Cuban/Afro-Caribbean prism was not only an inspired concept, it was also a personally rewarding experience for the band leader. "The thing I feel really blessed about with this project is that all the musicians who played on it are people that I've known and musicians that I've performed with for years," says Herwig. "Robbie Ameen is a great friend of mine. We've known each other and have been playing together since we were 15 years old. Paquito is someone I started playing with in 1984 and then played with later in his Havana-New York Connection band and in the United Nations Band, which he took over the leadership of after Dizzy passed. Brian Lynch and I have been playing together in Eddie Palmieri's band for 20 years. Dave Valentin [flute] played with us in Eddie's La Perfect II band a few years ago. And Mario Rivera [baritone sax], who is one of the icons of Afro-Cuban music, has also played in Eddie's band over the years, as did John Benitez [bass] and Richie Flores. So Eddie was a kind of catalyst for this project."

The group empathy of this extended family of bona fide salseros can be heard from start to finish on this riveting take on Miles.”