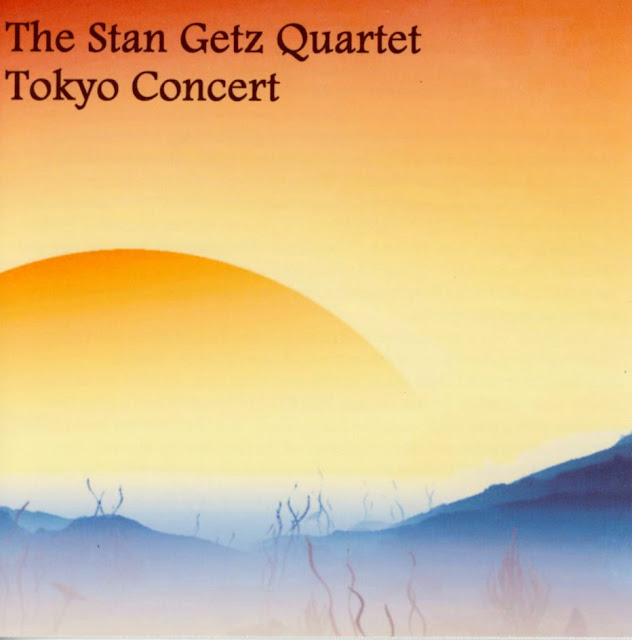 Highly regarded as a vibraphonist and percussionist, the years 1963 - 1965 were particularly busy ones for Larry Bunker as a drummer.

Although Larry’s years as a notable Jazz drummer dated back to 1953 when he took over for Chico Hamilton in the original Gerry Mulligan, as Larry explained it: “Work for Jazz drummers in Los Angeles usually went to Shelly Manne, Stan Levey and Mel Lewis. I got the rest.”

He made that remark on more than one occasion and at times I wasn’t sure if it was made in frustration or was just a reflection of the sarcastic side of his personality which did show itself from time-to-time.

Not one to sit on his hands [pun intended], during the decade of the 1950s, Larry was well on his way to becoming a vibraphonist of considerable talent and a versatile percussionist who would ultimately develop into a world class tympanist. He was also a capable pianist.

In my long association with his work as a Jazz drummer, first as a student, and later as a fan, what was especially evident was how fluid, powerful and controlled his drumming had become during the three years from 1963-65.

There are a number of examples of these qualities in his playing, but none better in my opinion than the solo he played on All God’s Children Got Rhythm as a member of the Stan Getz Quartet along with Gary Burton on vibes and Steve Swallow on bass at a concert that took place on July 18, 1965 at Kosei Nenkin Kaikan, in the Shinjuku District of Tokyo, Japan.

The music from this concert was recorded but never released commercially. A Jazz buddy in New Zealand sent me the music and when I played it for Larry a couple of years before his passing in 2005, he commented: “I really had it together in those days.”

When I asked him “Why?” he said: “You gotta remember, I was playing a lot of drums, back then - almost exclusively. I was on the road with Bill [Evans] for almost two years, then Gary [Burton] and I formed our own quartet and then I went out with Gary and Getz through the summer of 1965.”

For those Jazz fans who may not be aware of Larry’s talents as a Jazz drummer, I have included a Soundcloud audio file at the end of this posting along with a video of Stan Getz’s performing Con Alma, both from the unreleased music from the July 18, 1965 Tokyo concert at Kosei Nenkin Kaikan.”

Here’s more background information on this version of the Getz quartet and the music from the concert. 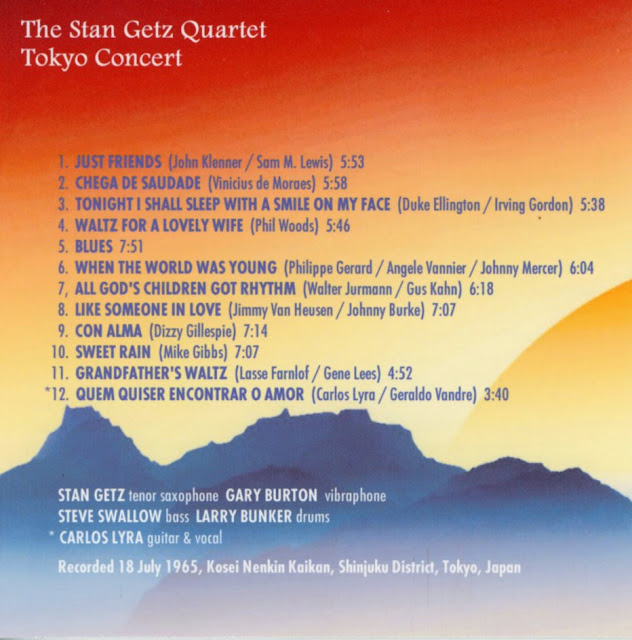 “When guitarist Jimmy Raney decided to leave the Stan Getz band in late 1963, Stan had difficulty finding a pianist to go with the Quartet on a three week tour of Canada in January 1964. He was persuaded by Lou Levy, the pianist, who was not available, to audition young vibraphonist Gary Burton-who he then hired. It was some time before the new quartet found its musical feet, although Verve did record the new quartet in April and May 1964. The April performances were never issued, but the six May tracks, with Astrud Gilberto’s vocal later dubbed in, and were issued on Verve V6-8600. "Getz Au Go Go".

In October 1964 a concert at Carnegie Hall, again with Astrud Gilberto was issued on Verve V6-8623, "Getz/Gilberto #2" but no further recordings by the Getz/Burton group were issued by Verve until 1994 when the company released "Nobody Else but Me" - Verve CD 5621 660-2. This was the group's studio session from 4 March 1964, recorded a few scant weeks after Burton became a member of the Getz quartet.

The group was also recorded in concert in Paris, France on 13 November 1966, with Roy Haynes on drums in place of Larry Bunker. French Polydor/Verve issued eight tracks spread over three Lp's. In 2002 six of those tracks were issued on French Gitanes Jazz CD 517 049-2 "Stan Getz In Paris", together with a previously unissued Stan's Blues.  But these albums have (so far) been the only commercial albums released of the Getz/Burton quartet. Gary Burton left the group to form his own quartet shortly after the 1966 European tour.

A number of unauthorized recordings have been made at various concerts of the group - but this recording is significant for several reasons. Firstly, the performance come from the mid-period in the life of the group, when it had really settled as a working band. Secondly, it is the first time (according to discographer Arne Astrup) that Getz performed both Sweet Rain and Con Alma and especially with this rendition of Con Alma the seeds of the magnificent performances of the two songs on Verve V6 8693 - Verve CD 815-054-2, "Sweet Rain" of March 1967, can be heard. And thirdly, for the most part the recording quality is very good.

Astrup notes that "parts of this very excellent concert was scheduled for release on Verve, but the album was never issued." One track, Waltz For A Lovely Wife, was issued on Italian Philology W 40.2 "Sweetie Pie" - an anthology of twelve 'pirate' Getz performances, but the Philology track is in less than ideal sound.