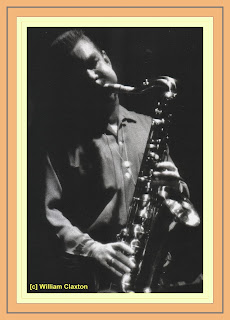 “Moore was a terrific, but star-crossed tenor player, at his best as good as Getz and Sims, but never able to get a career together as they did. He left only a small number of records behind him ….”
- Richard Cook and Brian Morton, The Penguin Guide to Jazz on CD, 6th Ed.

If, as Louis Armstrong’s states – “Jazz is only who you are” – then the inventiveness and spontaneous nature of tenor saxophone Brew Moore’s music was certainly reflective of his wandering and constantly searching lifestyle.

Mark Gardner, the distinguished Jazz author offered these insights about Brew in the liner notes to Brothers and Other Mothers [Savoy Records SJL2210].

“Milton A. Moore Jr. was a drifter, a born loser, a hero of the beat generation and a brilliant saxophonist. Yes, he once remarked that any tenorman who did not play like Pres was playing wrong-that was the extent of his admiration.

was born in , on , and his first musical instrument was a harmonica given to him by his mother as a seventh birthday present. He played in his high school band and at 18 got a job with Fred Ford's dixieland band. He arrived in during 1943 and heard what bebop was all about. He would return to several times in the late forties to lead his own quartet, work with Claude Thornhill (an unlikely environment), swing his tail off in front of Machito's Afro-Cubans, gig with Gerry Mulligan and Kai Winding at the Royal Roost and .

was never around one place for too long. He would take off for or , playing all kinds of weird jobs ("I go where the work is"). Around 1953-54 he was on the Greenwich Village scene, a frequent jammer at Bob Reisner's Open Door where other cats playing mostly for kicks and little bread included Thelonious Monk. Charlie Parker, Charlie Mingus and Roy Haynes. It was at the Open Door that Bird and Brew once serenaded a piece of chewing gum stuck to the floor. Recently discovered recordings also found Parker and Moore together on 1953 sessions in .

One day in the 'fifties Brew casually took off for . As told it, "Billy Faier had a 1949 Buick and somebody wanted him to drive it out to and he rode through shouting 'anyone for the Coast?' And I was just sitting there on a bench and there wasn't s*** shaking in so I-said 'hell, yes,' and when we started off there was Rambling Jack Elliot and Woody Guthrie." After Woody heard Brew play at the roadside en route he refused to speak again to the saxophonist.

Guthrie didn't dig jazz. "But we were the only juice heads in the car so Woody would say to Jack or Billy, 'Would you ask Brew if he'd like to split a bottle of port with me, and I'd say, 'You tell Woody that's cool with me.' Then they let me off in and I took a bus up to ."

Before that fantastic journey. Brew had worked around with his buddy Tony Fruscella, a beautiful trumpeter who was also over-fond of the juice. Allen Eager was also a regular playing partner of Fruscella's. Brew stayed in Frisco for about five years, played all over town, made a couple of albums under his own name, recorded with Cal Tjader and drank a lot of wine. He was seriously ill in 1959 but recovered and in 1961 moved to and for three years drifted around the Continent.

Twice in the 1960's he returned to the States but there was still no s*** shaking and nobody bothered to record him properly (a date as a sideman with Ray Nance was the only evidence of the final, unhappy return). His parents were very old and his mother sick. Brew was far from well and didn't look after himself. Friends kept an eye on him and tried to ensure that he ate regularly but was almost past caring. 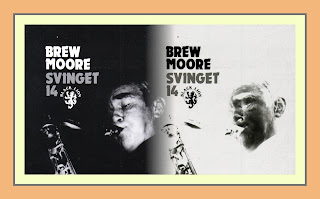 When he decided to split back to via the where he played at Jimmy Gourley's Half Note Club in , some of his admirers in produced a four-page newspaper called "Brew Moore News," in which Brew wrote a touching little verse:

Love I feel, but longing much;
Thy face I see, but cannot touch.
Your presence in heart is good, I know,
but hand in hand-it's greater so.

Time was running out for Brew. There was one more album - a great set made at a club [Stampen] where really grooved. Then came the news that he had died after falling down a flight of steps in a restaurant.

The final irony: Brew, who had scuffled and scraped for cash almost all his life, had just been left a substantial sum of money, to give him genuine security, by a relative who had died. It happened too late.”

“Scuffling” is very much the byword when talking about Brew as one has to jump here and there to find the few scraps of information and opinion that has been written about him in that Jazz literature.

Jazz author and critic, Ralph J, Gleason, had this to say about him in the insert notes to one of Brew’s best recordings – The Brew Moore Quintet [Fantasy 3-2222 –OJCCD 100-2]:

Mainly main idea is to get back to simplicity.' says Brew Moore of his work these days. "I like a small group—such as the quintet we have on this album—where there is no other front line and I can let myself go. The biggest kick to me in playing is swinging-freedom and movement. And with a small group, I can do this more easily.

"Music must be a personal expression of one's own world and way of life. When every­thing else gets to be a drag there is music for forgetfulness and also for memory and or a reminder that there is more good than bad in most things. The idea of playing for me is to compose a different, not always better I'm afraid, melody on the tune and basis of the original song, rather than construct a series of chord progressions around the original chords. I feel that in several spots in this group of tunes we attain the rapport necessary for good jazz. I hope so."

And when you listen to these numbers, you will agree that Brew … has done what he set out to do. These all swing and even Brew, who is most critical of his own work ("I guess I never have been happy with anything I did") had to say of this album, "It swings. You can say that."

Brew has two absolutely golden gifts. He swings like mad and he has soul. These are things you cannot learn by wood-shedding [practicing], or in any conservatory. You have to be born with them or learn them by living. Brew had them and he also has a priceless gift for phrasing.

"Everything he plays lays just right," one musician put it. It certainly does. …  When Brew says it, he says it simply, but it rings true. That's the best way there is.”

, in his definitive West Coast Jazz: Modern Jazz in , 1945-1960 encapsulates the essence of Brew and his career when he writes:

“After high school began a peripatetic career that brought him little fame but gave him a heady taste for life on the move. …

By the time he moved to [1954], had achieved a reputation for excellence among Jazz insiders …. Jack Kerouac depicts a performance in Desolation Angels, where Brew (or Brue, as Kerouac spells it) starts his solo with, the beat prosodist tells us, "a perfect beautiful new idea that announces the glory of the future world.”

This future glory eluded to the end. His quartet and quintet albums on Fantasy, made during his years, were his last commercial recordings in the . These along with his sideman re­cordings with Tjader, find the tenorist at absolutely top form, stretching out over standards with an impressive melodic and rhythmic inventiveness. In 1961, he moved to , where, except for intermittent appearances in the , he lived until his death in 1973 as the result of a fall.”

To give you a sampling of what’s on offer in Brew Moore’s music, with the help of the crackerjack graphics team at CerraJazz , we put together the following video tribute to Brew on which he performs You Stepped Out of a Dream with Swedish baritone saxophonist Lars Gullin [who also did the arrangement], Bent Axen [p], Niels-Henning Orsted-Pedersen [b] and William Schioppfe [d]. The music was recorded in in 1962.