The Clayton Brothers: John and Jeff 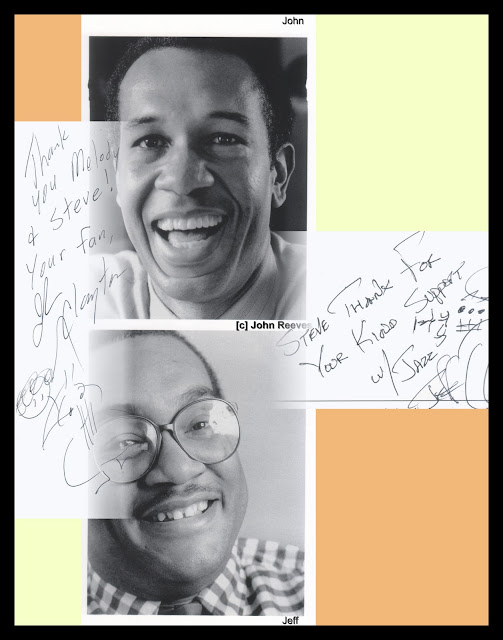 Have you ever noticed how approachable most Jazz musicians are?

It’s a quality that I find to be very admirable, especially in view of the fact that they are so unassuming about the artistic genius that they put on display during their performances.

By comparison, try and approach a Rock star who can perhaps play three chords on a guitar, one who really does believe that there’s an amplifier with a volume control that “goes up to eleven,” and you are likely to be met with resistance from an entourage of body guards.

And then there are the $300 greet ‘n meet post-performance passes which one can purchase for the pleasure of standing backstage along with a horde of grossly overdressed people in order to have the privilege of being in the presence of some operatic diva - who sang flat all night.

Follow a Jazz musician off the stage at the close of a set at a club or at a festival, say something complimentary about their playing and you’ve made a friend for life.

So it was with my first meeting with the Clayton Brothers: John and Jeff.

They had just concluded an appearance at one of Joe Rothman’s West Coast Jazz Parties which are held each year at the Marriott Hotel around Presidents’ Day and Labor Day, respectively, when we literally ran into them backstage.

John is a bassist and Jeff played alto sax and flute that night along with Terell Stafford on trumpet, Bill Cunliffe on piano and Jeff Hamilton, John’s long-time rhythm section mate, on drums.

The group’s set that evening drew a standing ovation from the appreciative crowd and deservedly so as they really swung-their-backsides-off.

When we met them, we were looking for The Green Room, usually a series of interconnected rooms behind one of the hotel ballrooms which is laid-out with food and grog for the musicians; a place where they can meet and relax before and/or after their sets.

Both John and Jeff are “big dudes,” which along with their superb musicianship and the huge smiles that they usually carry on their faces, all combine to give them an imposing presence.

When we expressed our pleasure in their recent performance, we no longer had to seek out The Green Room: they brought us to it as their guests!

Have I mentioned how easy it is to approach Jazz musicians?

John and Jeff autographed the John Reeves photos which you see at the beginning of this piece, offered us “goodies” from the banquet table and proceeded to treat us as though we were the most important people in the world.

And their laughter and good humor – of which there was plenty - was infectious. It felt good to just be around them; this as an added benefit to the already-experienced pleasure of their music

According to who wrote the annotation about them in John Reeves’ Jazz Lives: 100 Portraits in Jazz [: Firefly Books, 1992]:

“John and his brother Jeff [w/moustache in photos] come from a family of seven children, raised by their mother, a pianist, organist, and children’s choir director. Jeff was drawn to the work of Cannonball Adderley. He studied at , Northridge, majoring in oboe and English horn. … He studied privately with respected teacher and saxophonist Bill Green. Jeff plays all the saxophones, all the clarinets and flutes, all the recorders, and, for good measure, harmonica. As one friend said. ‘He can play anything you can blow.’

John and Jeff play together in the Clayton Brothers Quintet and in the nineteen-piece Clayton-Hamilton Jazz Orchestra, formed in 1985 and co-led by John and Jeff Hamilton, John’s favorite drummer and friend since their student days at .” [p. 170]

While he was still attending , on the word of legendary bassist Ray Brown, Hank Mancini hired John as part of the rhythm section for his national concert tours which originated out of .

Following his graduation from university, John worked in pianist Monty Alexander’s trio [with Jeff Hamilton], spent some time on Count Basie’s band and then moved to where he was the principal bassist with The Amsterdam Philharmonic from 1980 through 1984.

The ubiquitous and peripatetic nature of John’s musical career seems to know no bounds as he and Jeff Hamilton are also vocalist/pianist Diana Krall’s bass and drums mates of choice.

Given Ms. Krall’s popularity and resultant tour schedule, one is as likely to run into John and Jeff Hamilton at the as in a local Jazz club.

Speaking of which, Jeff’s trio with on piano on Christoph Luty on bass perform regularly at Steamers Café in .  Given their close friendship and musical compatibility, one is likely to see John Clayton there, too.

It’s easy to find him, just look for the big, tall dude with the radiant smile and half of the club gathering around him to say “Hello.”

Check out the following Playlist for the Clayton Brothers Band featuring Terell Stafford is on trumpet, John’s son, Gerald is on piano and the drummer is Obed Calvaire.