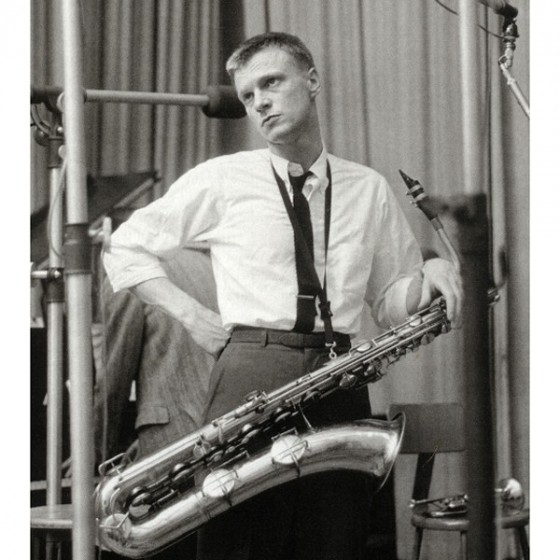 [Ed. Note: An open letter-article to Theme written by Arlyne Mulligan in comment on the Will MacFarland article “Mulligan - The Sound Alone” [Theme magazine, January 1954]. This article has brought to light some interesting views of the Jazz artist.

[N.B.: Arlyne's name is misspelled by Theme in the article].

“I should like to say a few plain, simple, possible four-letter words about a human being with whom I am well-acquainted, my husband. First, because Gerry has always very much desired to be understood. He has no wish to be a man of mystery, hiding behind the veil of “sophistry” or pseudo-intellectualism, nor has he ever confused obscurity with subtlety. And secondly, because as a music fan, and as a rabid listener through these many years preceding my marriage to Gerry, watching “bop” emerge from the murky environs of such jazz hideouts as Don Jose’s in New York, and late evening sessions at Nola Studios, I have long felt that someone should add more words about the jazz scene.

Of Mulligan the musician I can say very little without including Mulligan the man. From whence springeth the sounds, the ideas, and the droll humor, Gerry has been labeled a purist, a misnomer that is unfair both to Gerry and the “purists.” It is impossible for the conscientious listener to confuse his vitality with refinement, his music is far to lusty for this, and speaks thus most completely of mixture, potpourri and remixture once again.

Ten men want to be jazz musicians. One puts his horn to his mouth and grows up to be Zoot Sims (praise be!), or Chet Baker or Don Elliot, or for that matter, Illinois Jacquet. Five take their horns back out and go on to be carpenters or architects or actors. One became Gerry Mulligan. Can you explain this? It is easy to speak of background and experience, and all sorts of Freudian symbolism to explain how a man grows into the type of artist that he eventually becomes, but none of the reasons suffice.

Gerry’s music is a product of his childhood in Ohio, his adolescence, his dreams, his thoughts, his experience with narcotics, his peculiar puckish charm, his sense of humor that springs indominantly over any surroundings, his acute nervous tension, his basic personal integrity, and his musical awareness. One may speak of all this. But there comes a moment when a man puts his horn in his mouth or his pen to paper and he is alone. It is at this moment that we discern - can he blow? Can he write? I think that it is apparent that Gerry does both quite successfully.

Beyond this what can be said? It is said that all art forms are acts of love, and for a man to perform nightly the rites of love before an audience not always completely attentive i shattering. Gerry’s request for silence at the club in which he is performing may have met with some criticism in the press, but they were always greeted with applause and shouts of encouragement in the club. Far from being the silent, glaring jazzman, Gerry’s small speeches from the bandstand on the present state of affairs, the derivation of tunes, and the evolution of jazz are filled with whimsical humor.

I have read Mr. MacFarland’s article quite carefully and from my comprehension of the article I can not relate it to Gerry at all. True. Gerry has built no Cities of Glass [a reference to Bob Graettinger somewhat abstract and obtuse extended composition by the same name recorded by the Stan Kenton Orchestra] but he is both friend and fan of a man who did, and would have been quite proud to call this his own. MacFarland asks who would deny that sophistication in an art form that comes from an intensification of its congenital subtleties. I would deny it, although I have heard some jazz that sounds like an intensification genital not-so-subtleties. Sophistication and subtlety are not completely synonymous as witness Dizzy Gillespie’s classics in jazz such as Manteca, Cubana-Be and Cubana-Bop, which may be called sophisticated but can hardly be classified as subtle.

Indeed, a good art form sometimes is nothing more than an intensification of a man’s most obvious desires and dreams, and if you are used to an art form as a means of communication, which in my mind is one of its main justifications, then you cannot always be so subtle as to be uncommunicative. Unless you are, as many artists in all fields like to delude themselves, playing for yourself alone. But if this were true, you would not find yourself in a nightclub, horn in hand, exposed to the slings and arrows of outraged critics, or for that matter in print in a magazine.

I do not believe Gerry plays intellectual music or emotional music or cool music or hot music, because for me there are no such things. Music is an art form that must appeal first to the ear and then to the central nervous system, and only then to the mind and the emotions. A man plays music or he does not, thus making room for everything from polkas, waltzes, dixie, bop, ad-infinitum.

Gerry gives himself away whenever he blows and whenever he writes. This is true of all creators, and all innovators. He is not a radical, not a character. He is a boy who enjoys both a good steak and clean socks, although he has not always been able to afford either luxury. If he has struck some responsive chord in you through his music, then you know what he is. You have heard Gerry’s buoyancy of spirit, his flights into melancholia, his unerring musical taste, and his natural instinct for discarding affectation for a cleaner, clearer more direct approach. You have heard too his deep musical sincerity, so that he will always blow and write what he wants and not what someone else pays him to do.

It is my sincere belief that when a man considers his instrument one of pleasure not only for himself but for his audience also, when he himself is most happy when his horn is in his hand, good usually comes of it. A fan of Gil Evans, Red Nichols, Charlie Parker, Chico Hamilton and Red Mitchell, and admirer without peer of Igor Stravinsky, Charles Ives, Maurice Ravel and Bob Graettinger, and a lover of music of all kinds, Gerry has no wish to be categorized. There is not as much room in the world as there once was for the independent thinker, the shiny face and the honest count, but perhaps these qualities give Gerry his greatest distinction both as a person and as a musician.