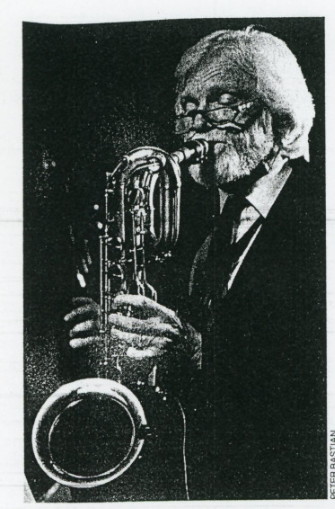 They are more interested in what comes out of the horn than the horn itself.

But for the player, the mechanics of the instrument are an entirely different matter as can be seen in this article by Ed Enright concerning Gerry Mulligan’s gear which appeared in the December 1992 edition of Down Beat.

It’s a brief but fascinating look at the many considerations required to play an instrument or instruments effectively in a variety of settings as well as what goes into optimizing their performance.

“A traditionalist will tell you that the only good jazz is acoustic jazz. But even a purist like baritone saxophonist Gerry Mulligan, who's always been a stickler for working with acoustic instruments, isn't totally adverse to electronics.

Mulligan mixes a little bit of the new with the old—a subtle twist of technology that's hardly noticeable to even the most discriminating ear. Listening to his recent recordings and seeing him play live today, you'll hear that same cool, earthy "Mulligan" sound: a perfect balance of horn, mouthpiece, reed, and player.

Mulligan's sax itself is a gold-plated Conn professional model, serial number M189588, made in 1926. Back then, Conn saxes featured extruded tone holes with a rolled lip, which Mulligan says "makes the pads seat really well."

Rolled tone holes offer two advantages according to Joe Sax of Joe Sax Woodwinds in Dumont, N.J., who services Mulligan's horns. "The soft, rolled edge is more gentle to the pad, and it makes the tone hole stronger and resistant to bending or nicking when the repairman uses tools to manipulate the pads," he explains.

Sax has articulated Mulligan's G-sharp key, causing it to activate automatically when Mulligan presses the low C-sharp, B-natural, or B-flat key with his left pinky finger. It's a common feature on modern saxes that facilitates tough interval jumps involving the left pinky.

Sax has also taken the thumb rests off the horn, simply because Mulligan doesn't like them.

Mulligan's second horn is a silver-plated Conn baritone sax, serial number 226986, made in 1929. It produces a dark tone that Mulligan feels is great for recording in the studio. "It's a pretty-sounding horn, but I don't like it for the theater because it doesn't project," he says.

Mulligan's Gale mouthpiece plays an equally important role in sound projection—so important that he considered retiring when he broke it once and couldn't find a replacement. His career was saved by Vandoren product specialist Jean-Paul Gauvin, who was able to repair the mouthpiece's broken tip seamlessly. The mouthpiece appears to have been customized under a previous owner. "That's why I never could replace it," Mulligan explains.

He acquired the Gale in the early '50s while looking for a mouthpiece "that I could get control and volume with and be able to project. Most baritone mouthpieces, I could never find any that would project worth a damn. This does."

Mulligan's quest for the perfect mouthpiece was inspired by an experience playing in a group with Charlie Parker at the Apollo Theater. "Bird would go out front and play a solo, and I got this impression that the sound was going out into the theater and I could hear it hitting and bouncing off the back wall. And I said, Aha! That's how it's done.' At the same time he was playing loud enough to fill the place, but the sound was beautiful; it wasn't harsh."

The Gale also made it possible for Mulligan to play with an attack he couldn't get on other mouthpieces. "I want a note that comes out immediately, and this does it," he says.

When it comes to reeds, Mulligan uses Vandoren mediums or medium-hards. "It's not a wide-open mouthpiece, so I can use a stiff enough reed to get a solid sound out of it. If you use a soft reed on baritone, it buzzes all over the place, and I try to eliminate as much of the buzz as possible."

Reed longevity is one of Mulligan's fortes, and he takes it to the extreme: He once played the same tortured reed for a year. Mulligan maintains a reed by cleaning it after playing and putting it back on the mouthpiece so it dries in the proper shape.

While Mulligan's art is shaped purely by what comes out of his horn, a little technology goes a long way in communicating it to others. You won't catch Mulligan with his foot in the bell trying to reach low A, for instance. Not only does he accept the baritone's natural range limitations (B-flat on the low end), but the bell is already occupied by a clip-on wireless microphone.

The wireless system consists of a small mic mounted onto the horn's bell, a transmitter attached to Mulligan's belt, and a receiver that plugs into the sound board. It was designed by the same technician who did Miles Davis' setup—Ron Lorman, president of Hartke Systems.

In 1985, Lorman custom-designed Miles' system with a special preamp to handle horn levels. "Nobody was making anything for horns at that time, so I tried out the Samson CT-2 wireless transmitter with the Ramsa WM-S2 [electric-style] microphone," Lorman explains. 'And then, in turn, Miles started opening his big yap and we'd get calls from Dizzy Gillespie and Mulligan. So we started putting together a package for these people.’

As in most live situations, Mulligan used the wireless system at Chicago's Ravinia festival during the premier performance of Re-Birth Of The Cool this summer. During the project's preparation stages, another of Mulligan's toys came in handy: the Synclavier digital workstation. After acquiring less-than-perfect transcriptions of songs from the original, sonically crowded Birth Of The Cool recordings, Mulligan had a computer copyist feed the charts into the Synclavier's note-processing software. Then, it was ready for editing.

"We had to make changes in order to try to determine what was there. [The transcribers] were able to get pretty close on a number of things; and then the other things we had to go back over and rework and try to remember what was done originally. All of that music was lost."”                            DB