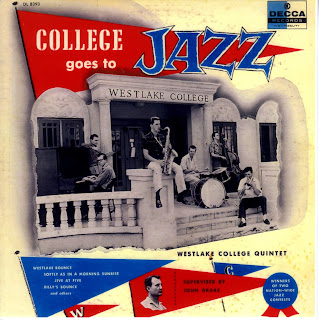 The introductory paragraphs of this feature on Jazz at Westlake College are drawn from Michael T. Spencer’s Jazz Education at the Westlake College of Music, 1945-61 which was published in the Journal of Historical Research in Music Education, Vol. 35 No. 1, October 2013.
After Mr. Spencer’s lead-in, you’ll find John Tynan’s liner notes to the Decca LP College Goes to Jazz: The Westlake College Quintet [DL 8393] which were written at the time of the LP’s release in 1956 when John was also beginning his tenure as the West Coast editor of Downbeat magazine.

The album represents something of a milestone since at the time of its issue, there were very few, if any, full length LPs recorded by college musicians associated with a formal, university Jazz curriculum.

Likewise, while snippets of individual artists' education in jazz are found in countless biographical, autobiographical, and historical works, few offer sustained critiques of these institutions in relation to entire jazz movements. In contrast to these works, and in an attempt to further carve out a space for jazz education histories in the jazz history canon, I want to explore one of the most important educational institutions for the study of jazz in the post-World War II era: the Westlake College of Music in Hollywood, California. 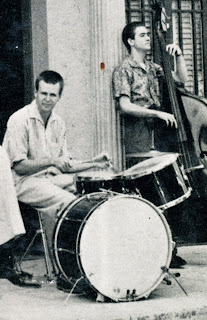 Established in 1945, Westlake was the first academic institution in the country, after the Schillinger House in Boston ([1945-1954], later becoming Berklee School of Music [1954-1970] and, even later, Berklee College of Music [1970-present]), to offer a college diploma that included curriculum in jazz.

It became the prototype for jazz education at other schools in the area such as Los Angeles City College and grew to rival Berklee and North Texas State University (now University of North Texas) as the most important jazz education center in the nation. To date, however, the story of Westlake has gone largely untold save for brief biographical moments in larger jazz and jazz education histories.

While exploring the accomplishments of its alumni alone would justify further inquiry, here I want to provide a deeper understanding of Westlake in terms of its mission, its aura, its reputation, and its representations within the jazz world of Southern California and to position the school as a vital cultural institution within both the West Coast jazz movement and the history of jazz.

Prior to World War II, jazz education at American colleges was extremely limited. While jazz history courses had previously been offered at elite institutions such as the New School of Social Research in New York City as early as 1941, and while many notable jazz artists such as Erskine Hawkins and Jimmy Lunceford served as directors for university jazz bands well before the war, neither they nor the vast majority of professional jazz artists in America received any formal training in the music. In this nascent period of jazz education, educators were more often musicians passing on information to one another without the academy (jazz historians included) as a mediator. As the former Downbeat magazine editor Charles Suber has noted, "Recordings were the first jazz textbooks."

As America emerged from the war, however, jazz came to represent a distinctly American cultural product, which, it was argued, buttressed American cultural superiority and should therefore be analyzed, qualified, and disseminated worldwide. The U.S. State Department-sponsored tours of American jazz artists to the Middle East, Asia, and Africa during the 1950s to promote American democracy and capitalism is a prime example of the newfound utility of jazz as an instrument of soft power diplomacy. According to this new intelligentsia, jazz, like any abstract art, "was synonymous with democracy" and on "'our side' in the Cold War struggle."

This sensibility accompanied a parallel aesthetic - among jazz enthusiasts in particular - which held that jazz necessitated installation into the American academy to legitimize the efforts of the U.S. government. Marshall Stearns was perhaps the most important of these ideologues and one of the first to make real inroads in creating a space for jazz in academia. …”

“Like any virile art form, jazz music is ever changing, ever moving in fresh directions as new voices take over where the old leave off. The future of the music lies in the horns and hands of young musicians such as those who perform in this album by the Westlake College Quintet. These five are presented in their recording debut; for though all had been playing for years, they had not seen the inside of a recording studio before July 17, 1956 when the first half of this album was cut. 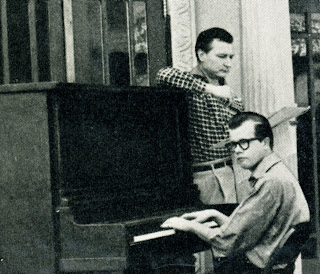 John Graas, one of the foremost exponents of the French horn in modern jazz and a leading voice in the development of the music on the west coast, had started coaching and rehearsing these young instrumentalists about a year before in a series of Saturday afternoon modern jazz workshops at Westlake College of Modern Music in Hollywood.

"Actually," explains Graas. "I concentrated on modern jazz because there was no provision in the school's curriculum for the most advanced phase of the music. Although I worked with groups of all sizes,  this quintet format - two horns and a rhythm section - proved most successful from my point of view. Then, too. the evident talents of Firmature and McDonald were ideal for the type unit presentation I had in mind."

As a group, their first break came when Howard Rumsey called  Dr. Alvin Learned, director of the college, inviting him to enter a combo in the annual Easter Inter-Collegiate Jazz Festival at Hermosa Beach's famed Lighthouse. The hand-picked group, led by Firmature and McDonald, chalked up a decisive win there by unanimous verdict of the judges. A follow-up triumph was scored about a month later when the quintet took top modern jazz honors in the nationwide college jazz contest sponsored by the Wurlitzer Company.

After hearing the quintet perform during one of its subsequent engagements in leading Hollywood nightclubs, Decca executives decided to record the group. 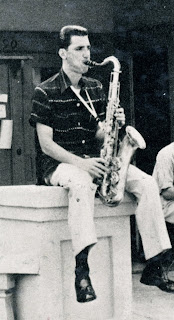 An outstanding talent by any measure is that of tenor sax man Sam Firmature. In this album he lays firm claim to a significant place among the top tenor sax performers playing jazz today. The dominant quality in his work throughout the album is variety of conception. He never repeats himself in the flow of ideas.

Masterful command of his horn, moreover, makes it possible for him to execute almost any idea, no matter how ambitious. Most important, however, he swings. His is a basic jazz feeling, a funkiness of approach that makes for a most pleasant listening experience. There can be little doubt that much of real jazz importance will be heard increasingly from Firmature. 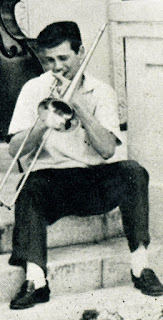 A healthy complement to Sam's fleet, swinging tenor is the valve trombone of Luther McDonald, whose mellow, lyrical horn proves an excellent foil as well as an excellent individual voice.

In summing up his experience with the Westlake College Quintet from musical conception to fruition, John Graas declares, "I believe it is possible for any professional jazzman who wants to take the trouble to develop college jazz groups like Westlake's so they may attain the high standards so apparent in this album."

Of course, in the 66 years since this album was recorded, the development of Jazz on college campuses has grown to the point where Downbeat magazine now devotes an entire edition to a listing of such programs.
Posted by Steven Cerra at 7:00 AM