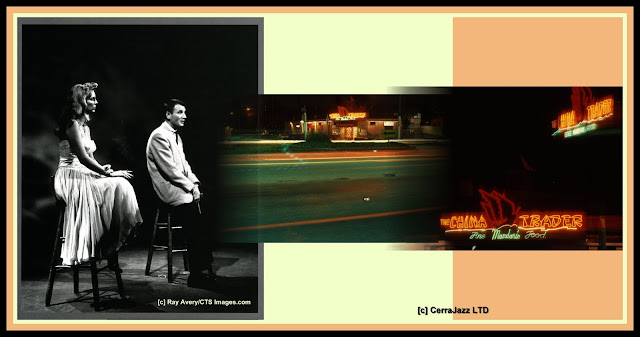 The China Trader is not there anymore.

Originally located at in , Ca, it was a Chinese restaurant that had a and nautical theme with lots of tiki heads and bamboo sprouting from every nook and cranny.

For a time it was best known for being the birthplace of the Hawaiian Eye drink [think Mai Tai].

The '60s detective, ABC television show Hawaiian Eye was filmed at Warner Bros. studios in nearby and The China Trader was the after-work hangout of its stars, Robert Conrad, Connie Stevens and Anthony Eisley and of many members of the crew.

The Hawaiian Eye drink was concocted there in their honor.

The Falcon Theater is in The China Trader’s place today.

is a very upscale community located between and , CA. Warner Brothers and Universal Pictures studios are only a few miles away. A 10 minute ride over the takes you into .

There really is a lake in and it is surrounded by very fashionable homes and a country club that offers access to a marvelous golf course.  Bob Hope is probably the best known of ’s many long-time residents, but numerous luminaries associated with the entertainment business live in the community. 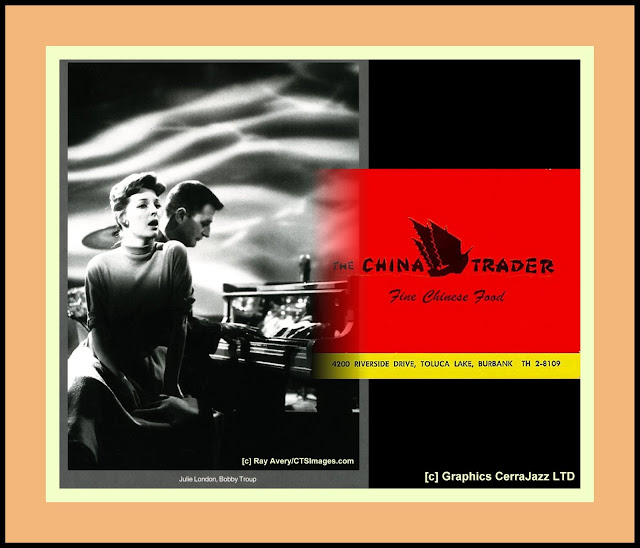 For many years, composer, pianist and vocalist Bobby Troop held forth at The China Trader in Toluca Lake.  He and his wife, actress and song stylist, Julie London, were residents of nearby Studio City. Since his piano was already stationed in the lounge, Bobby could and did walk to work on some of the nights he appeared at The China Trader.

Throughout most of the 1970s, Bobby and Julie were in the cast of the hit NBC TV show, Emergency!.  The popularity of the show only served to enhance the gatherings at The China Trader when Bobby was appearing there.

Bobby appeared solo on Thursday and Sunday nights and with a trio on Friday and Saturday nights.

Given his low-key temperament, unassuming personality and acerbic wit, Bobby always kept the atmosphere in the bar relaxed and cordial.

Julie dropped by occasionally and when she did, their were always numerous pleadings for her to sing, but she rarely did.

Bobby was one of the most comfortable-in-his-own-skin musicians I ever knew.  I first met him in 1962 when we were both involved with the Surfside 6 television show; he as an actor, and me as a member of the band that recorded the soundtrack for the series.

Over the years, I kept in touch with Bobby as The China Trader was a stone’s throw away from my home.  I even subbed as the drummer is his trio on a few occasions.

With 40-plus movie and television appearances to his credit and a slew of royalty checks coming in from songs he wrote like Route “66,” Daddy and Lemon Twist, Bobby was a very busy guy and a fairly well-off one, too. Good for him; not too many musicians make more than a few schimolies in the music “business.”

He was very pleased and proud of writing the tune – The Meaning of the Blues.

Interestingly, when Julie was in the mood to sing during her visits to be with Bobby at The China Trader, she invariably sang this tune.

And to close here's excerpt from James Gavin’s insert notes to her album All About the Blues which Bobby produced for Capitol [7243 5 38695 2 6] which aptly describes one of Julie's many gifts:

“LPs were her true medium. The queen of the make-out album, recorded over 30 for between 1955 and 1969. Supported by a goose-down blanket of strings or just guitar and bass, she sounded so intimate that she seemed to be breathing into your ear. Men drooled over the cheesecake covers, which showed her snuggled in bed, posed in an alley as a scantily-clad courtesan, or seated backwards in an Eames chair, legs pointed up in a V. ‘I'm sure she hated all that,’ says Arthur Hamilton, the songwriter who wrote Cry Me A River, her breakthrough hit of 1955. ‘That wasn't Julie at all. She wasn't trying to seduce her audience; she just blotted them out. She hid inside the song. She didn't like to perform, she didn't like getting dressed, she didn't like that image she had to live up to.’”

The title of the tune on the following video tribute is Free and Easy which Bobby co-wrote with Henry and Mancini and which is how I think that Julie would have preferred to live her life and she took every opportunity to make it so.