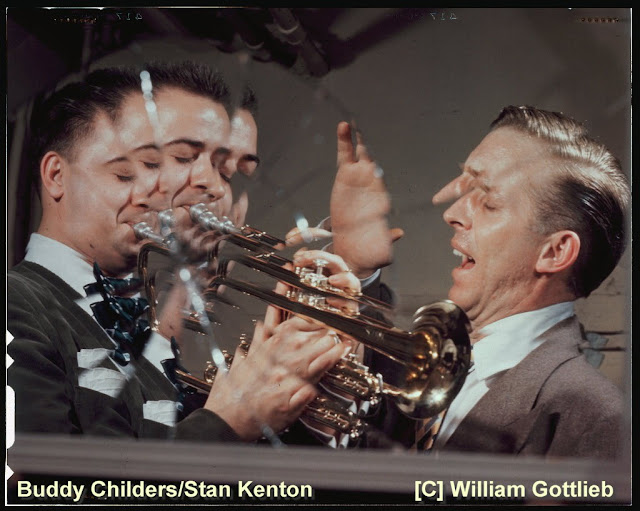 Stan Kenton and Marion "Buddy" Childers photographed through a fractured mirror to suggest the shattering effect of the Kenton hand's loud, dissonant brass.

I have always found it fascinating to explore how those on the periphery of Jazz relate to it.

The manner in which authors write about the music, photographers take pictures of the musicians performing it and artists and poets depict it in paintings and in verse can be as distinctive as the styles in which Jazz is played.

Both Herman Leonard and Francis Wolff took primarily black-and-white photographs, but Herman used back lighting and smoke-filled “live” performances as his venue while Francis used high speed film and slow shutter speeds to photograph musicians in repose, concentrating on the written scores and playing their horns during the studio rehearsals for upcoming Blue Note recordings.

On the West Coast, Ray Avery was a photographic chronicler of The Stars of Jazz TV show which originated in Hollywood while William Claxton was extremely adept at posing many of the stars of West Coast Jazz either in his studio or on locations such as the mountains, deserts and canyons of sunny Southern California, many of which appeared as cover art for World Pacific and Contemporary Records LPs.

I posted recently about William Paul Gottlieb’s The Golden Age of Jazz, a compilation of his photographs and annotations from the “Hot Jazz Era” through to the beginnings of Bebop, circa 1935 - 1950.

What was unique about Gottlieb’s work in comparison to most other Jazz photographers was that Mr. Gottlieb took his photos largely in support of articles he was writing for the major Jazz magazine such as Down Beat and Metronome and for his work as the Jazz editor of The Washington Post newspaper.

Some of his photographs were posed; some were impromptu; some were thematic, for example: the lead-in photograph to this feature with its theme of the “glass-shattering effects of Kenton’s powerful brass” or the ones that follow his annotation about Kenton which appears in Mr. Gottlieb’s Golden Age of Jazz, some of which were intended to underscore the written description of life on the road with Stan’s orchestra, both in performance and at play.

I don’t recall viewing very many photographic retrospectives of life on the road with a big band so in this regard, Mr. Gottlieb’s approach to Jazz photography provides some very unique insights into the music and its makers. 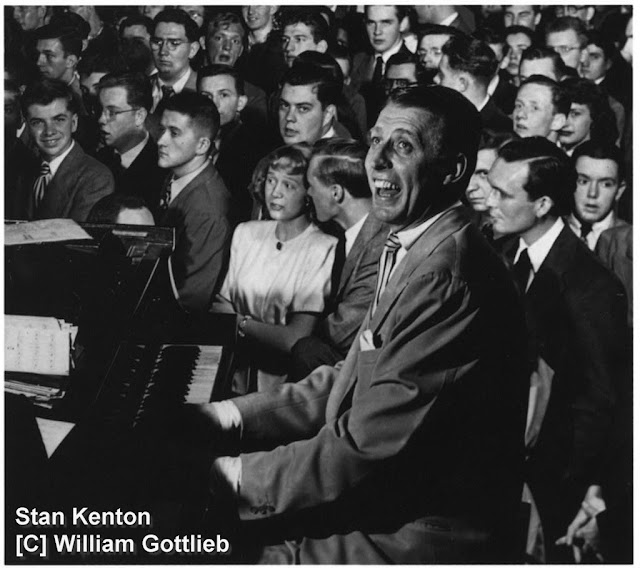 “Stan Kenton was the most prominent of those modern jazzmen whose music was consciously influenced by "classical" forms. Stan had at least one other distinction: he was the most controversial of the modern music makers.

Those who couldn't stand his orchestra found it pretentious, devoid of swing, and just plain awful. Yet such denigrations could, at worst, characterize only his more formal concert pieces. Most of his music over the years did swing—enough so that his orchestra was voted best swing band of the year in the Down Beat polls of 1947, 1950, 1951, 1952, 1953, and 1954!

It is a fact that his music, which he called "progressive jazz," often favored tightly written scores over improvisation; mixed tempos over strict time; and still other characteristics associated more with European music than with American jazz.

In particular, he was not beholden to the big beat. "It's not the rhythm that counts," he would say, "It's the personalized warmth of the sound." To paraphrase Duke: "It don't mean a thing if it ain't got that warmth." But was his music warm? His numerous detractors protested that it was absolutely cold!

Warm or cold, it was loud. Stan's screaming horns presaged the high decibels of the rock age, but his stalwarts did it without electronic amplification. Just old-fashioned lung power. When Stan raised his long arms to call for "more," the men in the brass section blew until their faces reddened, their eyes bulged, and incipient hernias popped.

I once spent nearly a week with Stan and his orchestra doing one-nighters, One-nighters were — and probably still are — a remunerative but baneful part of every "name" orchestra's existence. It meant traveling hundreds of miles a day, day after day for weeks, playing a dance here on one night, a concert there on the next night, and so on, the fees and distances depending on the popularity of the band and the skills of the band's booking agent.

One-nighters could turn into a rigorous, wearisome regimen for the musicians of any orchestra. It was even tougher for the members of the Kenton band, for Stan was a perfectionist driven by two inextricably connected forces: a desire for personal success and a crusade for progressive jazz.

Typically, the band would play, say, a concert, ending at eleven P.M. Stan would give the group a short break, but get it back for a strenuous rehearsal lasting an hour or so. Only then were the musicians released. Generally, they'd go—where else? — to a local music spot for a late snack and to hear what the local cats were blowing.

Then to their hotel. Late to bed. Late to rise. After breakfast, musicians and wives into bus. Instruments into truck. Next town, maybe 150 miles away. Where's Stan? Up early. Raced ahead in own car, like the wind (me along, a little scared). Interview with reporter. Visit to college music department. Session with one, two local disc-jockeys. Stan very bright. Very persuasive. By now, gang has arrived. Check in at hotel. Time and weather permitting, a quick game of intra-band baseball. But not for Stan. He's phoning ahead. Interviews to set for tomorrow, 200 miles away. Now it's concert time. Or dance time. Then it starts all over again.

Some days are a little different. Like that night we went to a club and got talking to a trio of college students, a little drunk, who made it clear they didn't like Kenton's music. I left the club a minute after the rest. Seeing me leave alone and thinking I was part of the band, the trio jumped me. I yelled. Eddie Safranski, an average-sized fellow made husky by wrestling a bass, rushed in like a squad of marines. Very gutsy. End of students.

A week to remember.” 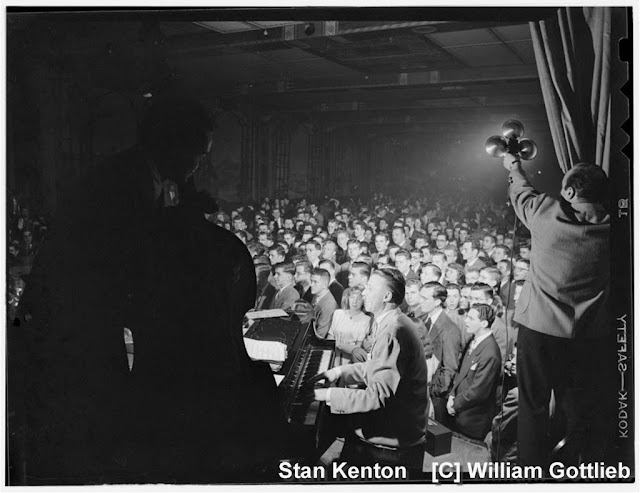 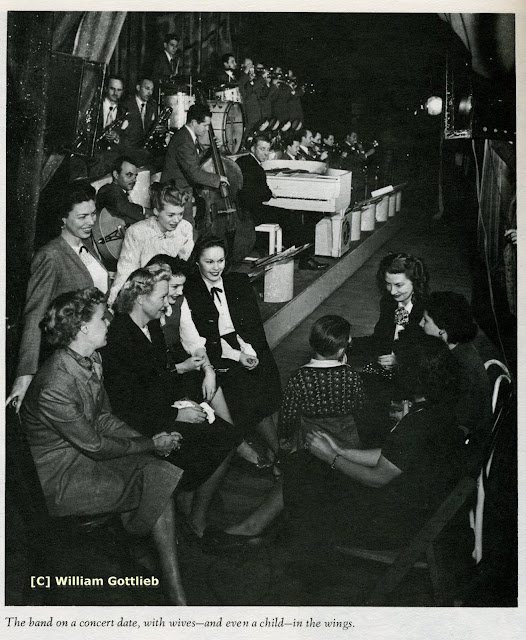 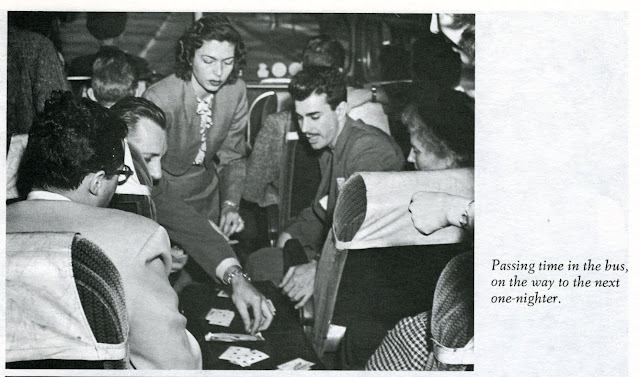 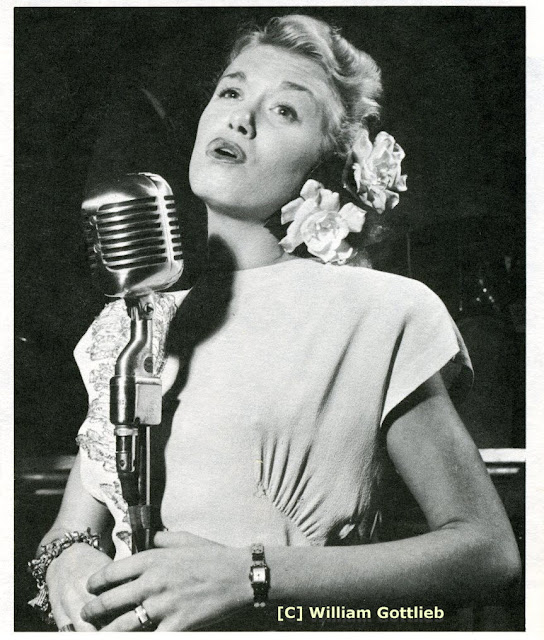 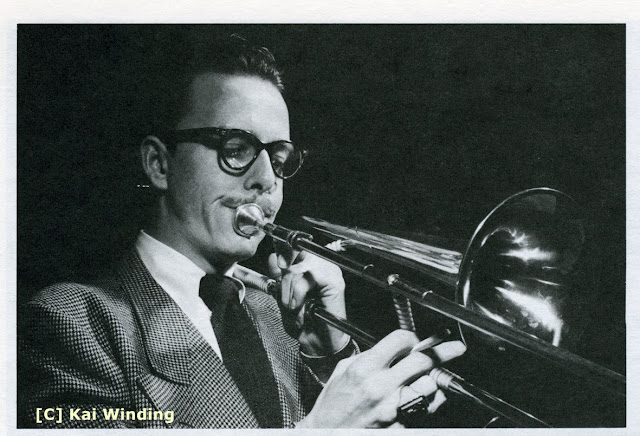 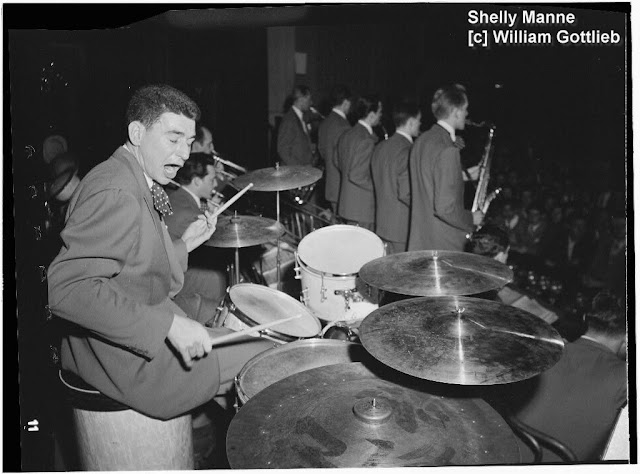 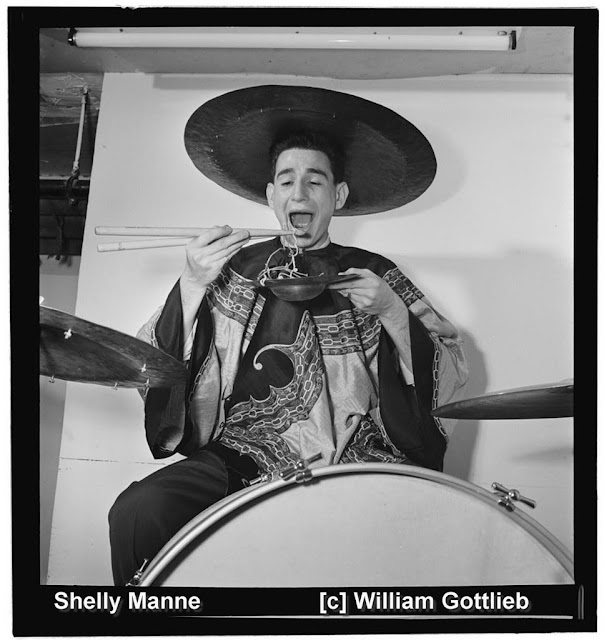 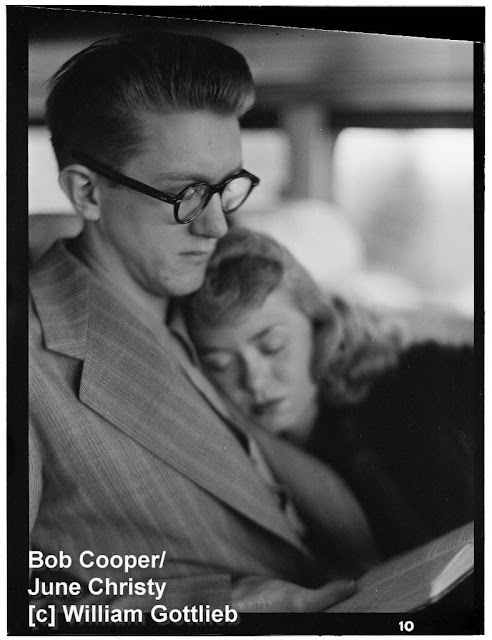 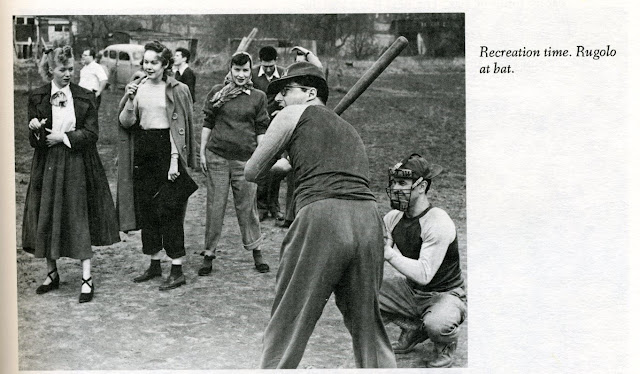 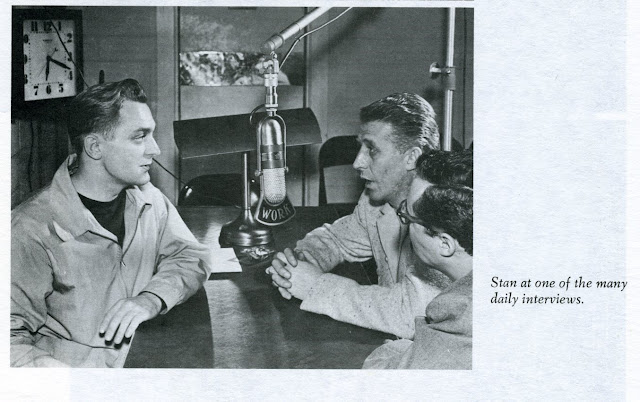 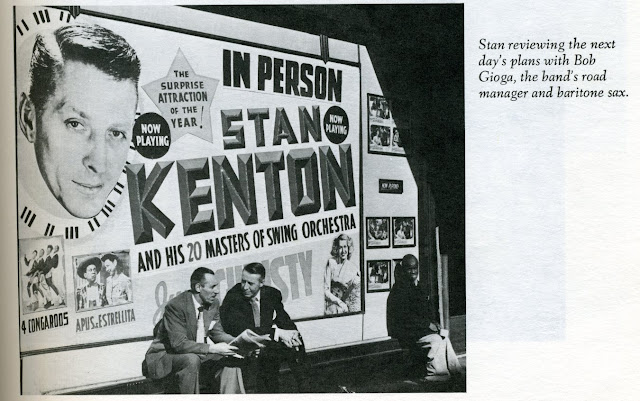