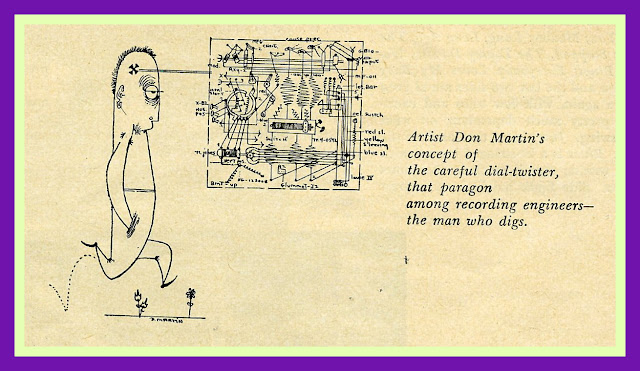 Rudy van Gelder died on August 25, 2016. He was 91 years old. The Jazz World owes him an enormous debt of gratitude not only for what he did in preserving so much recorded Jazz, but also because of the absolutely first-rate way in which he did it.


Subsequent to his death, the editorial staff at JazzProfiles, as an homage to him, re-posted an earlier feature entitled “Rudy van Gelder - 1924-2016 - A Signature Sound” which was based on James Rozzi’s November, 1955 article that appeared in Audio Magazine, and a 2-part interview that Ben Sidran conducted with Rudy in December 1985 which was included in his book, Talking Jazz: An Oral History.


I recently located the following article about Rudy by Burt Korall from the January 1956 issue of Metronome Magazine and thought it would make an excellent addition to the blog archived material on Rudy.


“With a flourish of the maitre d's hand we were seated. When the orders had been taken, the conversation reverted back to recordings, sound and the responsibility of the recording engineer to the artists, to himself, and especially to those who devour the end product ... the listeners.


It is most essential to identify my dinner companion, for he is the subject of tfiis piece, and, in my opinion, possessed of the greenest thumb for transferring sound to wax.


I first became aware of Rudy Van Gelder and his enigmatic recording studio through very expansive commendation of his work by various musicians and singers. If the commendation didn't come directly, it would usually occur in the in the context of a conversation  that was generally overheard in any one of the gathering places for people in the music business.


In just this fashion (spreading the news by word of mouth) Rudy's House of Sound has become a most important counterpart of many an artist's recording personality.


It is interesting to note that his species of recording  magic is performed in a room the size of a large living-room, and certainly the sound quality belies its comparative smallness If you've heard the current Jerri Winters vocal album (among many others),  with a string section, assorted horns and rhythm, you have somewhat of an indice into the capacity of this man and his living-room.


After hearing jazz musicians swear by him and singers refuse to do their dates anywhere else because of the undeniable quality of his recording procedures, my curiosity was pushed to a point where it demanded satisfaction. I had to find out the whok story.


Music and Rudy Van Gelder have been having a love affair for about fifteen years, take or leave a year (an affair I know his charming wife will excuse), and as in any affair of the heart, one must find an appropriate way to manifest one's love.


Rudy found his basic interest in the technical aspect of sound could best nurture this affair by bettering recording techniques, or at least making them more valid. For a few years, there was experimentation. The seeds of his ideas were sowed and cared for until in 1946, with Alfred Lyon and Blue Note Records as his first client, some of the full grown produce were harvested.


Time told the story of success, but under the foundation of all this experimentation, technical data and knowledge of microphones and sound relations lies a soul and this is the heart of the matter.


One concedes as a matter of obvious fact that every arranger arid musician feels a responsibility to his audience of getting the best of himself across to them under any conditions, but it is somewhat of a rarity when a recording engineer (a comparative middleman in the process), feels as intensely about it as Rudy does.


This factor takes the recording situation beyond the capabilities of his equipment into the sphere of artistic understanding. It is this and only this that engenders this man with the patience and limitless good will that permits full grasp of the meaning of a recording date and what it should be. The basic strength derived from complete understanding of his function both as an engineer and a human being allows for the capture of that particular quality that has led him to a place of leadership in his field.


It is a matter of overall satisfaction to Rudy: "Burt, I want things to be right for the artist's benefit as well as myself. His satisfaction is my satisfaction. It is ample reward, for a recording date if it can become a lasting rather than ephemeral thing, art, if you will, if the one most closely associated with the recording is able to approach it in a way that will induce the best out of air concerned."


Experimentation in technical as well as happy human relations continues out in Hackensack, and if you happen to catch Rudy between dates, it is likely he is on his way to his optometry practice In New York City to see a patient. Yes, whether it be eyes, or more important to us, eears, Rudy Van Gelder makes things just a bit more distinct and believable."