The Jazzprofiles editorial staff is indebted to Mr. Jim Harrod of Jazz Research for this Ray Avery photograph of drummer Shelly Manne from the November 1956 edition of Jazz Today and the Add Manne and Vinnegar: Serve Piping Hot article by Jack Maher from the July 1957 edition of Jazz Today.

As you read the cover subject comments below, the reader may wish to keep in mind that by the mid-1950s, the Jazz world was still experiencing the [relatively “new”] transition from big bands to small groups. Indeed, the November 1956 edition of Jazz Today also contains a feature article entitled: A History of the Small Group in Jazz!

ABOUT THE COVER SUBJECT

“Shelly Manne, our cover subject for this month, is about as much representative of the small group movement today as can be found. His recordings with the varied and sundry personnel of the Los Angeles area, and, with his own group reflects the strength and popularity of the three, four, five and six piece bands on both coasts.

Through his development from Kenton’s and other big bands, to leader of his own combo there is a note of integrity and excellence of musicianship. Shelly is a leader now but is always first a musician, putting his musicianship before any other consideration. Shelly as the new leader in the new world of small group Jazz is the very essence of this month’s Jazz Today.”

“Time, and the application of it, has taken another and more perfect turn through the recent performances of a rhythm duo operating on the far West Coast. Responsible for this new, invigorating concept of the drum and bass duo are Shelly Manne and Leroy Vinnegar. To be ultra-truthful, there’s nothing new about the Manne-Vinnegar team. What they have done is to solidify and expand the rhythm team all at once.

The solidification comes from the feeling of unity that Shelly’s drumming and Leroy’s bass are able to produce. Shelly’s concept of drums is primarily four-four. He uses the high-hat as a point of emphasis most times in a very slight way. This gives his rhythmic line an evenness rather than a predominantly two-four feeling. Leroy, in accordance with this, throbs his bass line, with that same four-four concept and with the added value of a big, round, sound making each note sound for its full value. The linear effect of the two instruments played separately is really as if they were one. The drums providing a sharp, critical percussion and the bass a wide, controlled full-sounding note value to each stroke of tempo.

The expansion takes place in the individual ability of each of the musicians in himself. Leroy often plays through the notes that go to make a particular chord, instead of just sounding the same notes over and over again. He uses also, often in concert with Shelly and a pianist, a triple-plucking technique that presents an effective variant to the usually strong, straight quarter-note line. Shelly’s use of counter-rhythm figures, bass drum punctuation and counter-tempo variation in the high-hat broadens the usual repetitive playing of the drummer. His concept in figures behind a soloist often has all the variety and all the freshness of the distinctively individual and stimulating melodic ideas he has in his solos.

Together these two individuals form a near perfect basis for any soloist: non-intrusive, fresh and inspiring, and, what’s of the utmost importance, a unified feeling and sound. A feeling and sound that has compactness, pressure and pulse.

After writing the above impression of the Manne-Vinnegar team, we went by way of Bell long-distance telephone to the Northridge, California home of Shelly Manne for verification or, if necessary, disputation by Shelly himself. What follows are the impressions Shelly Had on the position and functions of the rhythm section. 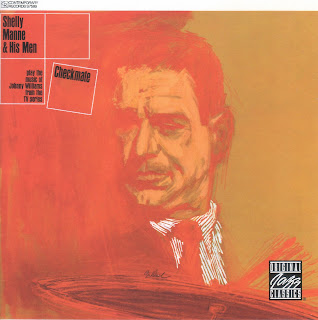 ‘What I like to hear, and strive for myself, in a rhythm section, is a section. I want to hear three men playing together as a section, the same as a brass section or a sax section with all the members playing together, not as sometimes happens an individual drum section, bass section and piano section. It’s all important that members of the rhythm section, and in fact the whole band, to be at one with one another. There’s a need for personal as well as musical regard for one another.

It’s most important too, for the bass and drums to have the same sense of time, the same swing feeling, and mutual respect for one another’s abilities. They must be open to hear what’s going on around them, and aware and flexible enough to fit with the whole band. Sometimes we play things along with the horns, at other times we play contrapuntal figures. In any case, the rhythm men have to be sensitive and equipped enough to respond to one another and to the other members of the band. 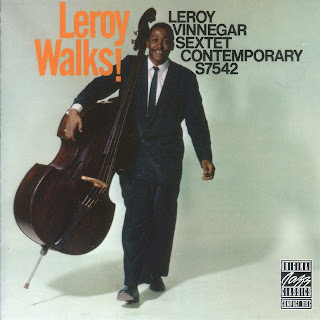 About Leroy” We first met when he sat in when Shorty and I had the group and then I heard him around Los Angeles with other bands. I was very impressed with him and still am. He’s got all those qualities I mentioned and we have a similar time sense. He plans to do a lot of studying in the future.”

And about drummers in general: ‘You know, I think a lot of drummers are confusing funk with soul. Playing the high-hat, for instance, seems to be a lost art. I like the feeling of having a snap on two and four but not the heavy predominance that’s so much in evidence today: the heavy two-four accent is becoming a crutch. I think I need to spend more time with the high-hat – go back and listen to some of those old Basie records with Jo Jones – they have some wonderfully colorful effects.

The drummer tends to imitate the leaders on his instrument, instead of developing something of his own. It seems to me that all the really big people in jazz all have had that identifiable individuality.’

After reading this series of quotations, I think you can see just why Shelly and Leroy are quite possibly the best two man rhythm team in the country – there’s a personal and musical understanding between them that’s evident on every tune they play.”

Should you like to know more about Shelly Manne, perhaps "... the most musical drummer who ever lived," Jack Brand and Bill Korst have put together a magnificent biography, discography and filmography of his career entitled Shelly Manne: Sounds of a Different Drummer copies of which can be obtained at http://www.percxpress.com/book.htm. 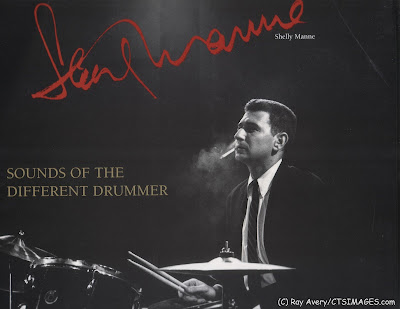