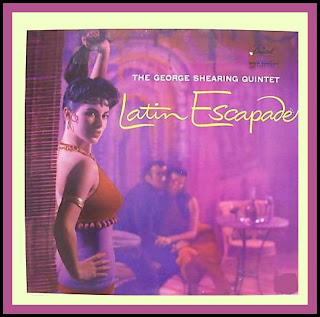 Sometimes I wonder if fans of Jazz who grew-up listening to the music in the 1940’s and 50’s realize how fortunate we are that so much of it has been re-issued in CD and Mp3 formats.

Since Jazz, in general, accounts for less than 5% of all recordings sold, it is amazing how much of it has been subsequently released in digital formats.

And yet, for a variety of reasons, more than occasionally we find that a favorite LP regrettably hasn’t been included in this transition.

One such album is Latin Escapade [Capitol T737] which features pianist George Shearing and his quintet. In addition to George, the quintet is made up of a guitarist, vibraphonist, bassist and drummer. Although these are all instruments that must be struck or plucked, George’s group has managed to achieve one of the more beautiful and easily identifiable sounds in Jazz. 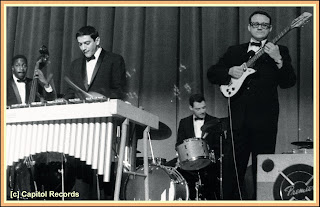 The uniqueness of “the Shearing Sound” comes from the way the group states the melody of each tune. This is formed by Shearing playing blocked chords around the notes of the melody with each hand an octave apart and the vibes playing in unison up an octave from the piano’s right hand and the guitar playing in unison down and octave from the piano’s left hand. 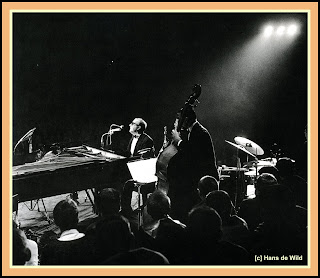 You can hear this four octave span quite distinctly on every track of Latin Escapade.

The JazzProfiles editorial staff  has developed YouTubes featuring four [4] tracks from Latin Escapade and embed them throughout this feature to enable a Shearing Sound sampling of the music from the album.

The first of these uses Cuban Travel Poster Art with the Shearing Quintet’s version of “Yours.”

Along with vibraphonist, Cal Tjader, who had occupied the vibes chair in George’s quintet before forming his own combo, Shearing was one of the earliest adapters of Latin rhythms in a small group setting.  Many of his 1950’s album contained Latin Jazz tracks or were thematically based on Latin Jazz themes as was the case with Latin Escapade.

George developed such a deep interest in Latin rhythms that he went so far as to insert a segment in his club sets or concert performances that highlighted tunes with a Latin-flavor. During these Latin features, Shearing would augment his quintet with conga drums and timbales with the Jazz drummer in the group playing various Latin percussion instruments, thus creating the instrumentation for authentic Afro-Cuban rhythms.

Of course, George was always a very commercial-minded musician [in other words, he liked to eat regularly and pay his rent on time] and it certainly didn’t escape his attention that dancing to the [then, newly-introduced] Mambo rhythm was a craze that was sweeping the in the 1950’s.

Hence, the following Mambo with Me cut from Latin Escapade which serves as the audio track to this YouTube tribute to the Mambo:

The long-playing record provided Jazz groups with room to “stretch-out” [i.e.:take longer solos] and it was not uncommon for Jazz LP’s to have 2 or 3 tracks that produced 18-20 minutes of music per side.

During his career, Shearing did make some LP’s with fewer cuts per side, especially with the quintet in performance, but he made many more with the more commercial or popular music format of 12 tracks per LP.

Although Latin Escapade belongs in the latter category, its finely crafted and well-executed arrangements, while easy on the ear, are anything but commercial.

With none lasting longer than minutes, each of the album’s twelve tracks is a miniature musical masterpiece.

George is the only soloist and during his solos he reveals a thorough familiarity with Latin Jazz piano stylings; particularly the heavy use of riffs and “montuno” [repetitive refrains].

All of these qualities are reflected in this YouTube which uses vintage postcards of Cuba from the University of Miami’s collection and Mi Musica Es Para Ti [“My Music is For You”] from the album as its audio track.

George has always had an ear for pretty melodies. He can swing hard, too, but his affinity for appealing airs results in a healthy variety of ballads on all of his recordings. He always arranges his treatment of such tunes very artfully so as to further enhance their beauty and, in many cases, their romantic or alluring aura.

At a time in the 1950’s and 60’s when AM radio in Southern California still offered programs that specialized in “mood music,” it was not uncommon to hear a Shearing Sound ballad treatment during one of these late night broadcasts.

One such example of Shearing's charming way with a ballad can be found on his Latin Escapade interpretation of Ray Gilbert and Osvaldo Farres’ haunting Without You, the audio track to this You Tube commemorating The Shearing Sound.

Born in 1919, George Shearing is still with us although no longer performing. In 2007, he became Sir George Shearing when he was knighted by Her Royal Majesty, The Queen of England, for his services to music. Incidentally, I wonder if Sir George’s longevity is contagious as Latin Escapade guitarist Jean “Toots” Thielemans and vibraphonist Emil Richards are also still on board.

Over the years, in addition to leading his marvelous quintet, Sir George has performed with Nat King Cole, Peggy Lee, Mel Torme and a host of other vocalists. More recently, he has appeared in concert with guitarist and vocalist, John Pizzarelli.

In addition to the recordings that he has made with these artists, George has a substantial discography under his own name – none better than Latin Escapade [1956].

After sampling the music on this album, we hope you will agree.