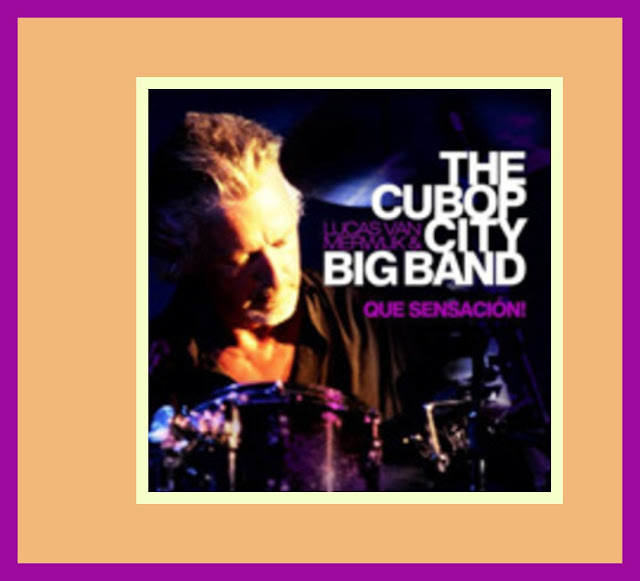 © -Steven A. Cerra, copyright protected; all rights reserved.
Lucas van Merwijk is one of the great drummers of our time.
He lays down so much good stuff that even the eyes of a trained drummer can't catch it all [thank goodness for the ears, too!].
And he makes it all look so easy.
Lucas is based in Amsterdam, although he travels all over the world as a principal in a number of percussion-oriented groups.  You can locate more information about Lucas' background, his current group affiliations and his recordings by visiting his website.
Lucas' main passion is Latin Jazz; he's a real afficianado when it comes to the many percussion rhythms and elements associated with this music.
Under his leadership, the Cubop City Big Band [CCBB], which is partially supported by an ethnic music grant made possible through the people of The Netherlands, has developed a reputation for performing authentic and excellent quality Latin Jazz.
Therefore, whenever the CCBB puts out a new CD, in this case -  Que Sensación! - it is considered to be "an event" by those who follow the music.
Fortunately, for fans of the Cubop City Big Band, there are also first-rate videos of the band performing two tracks from the new CD that were made from the Dutch public broadcaster VPRO's "Free Sounds" [vrije geluiden] television program.
The first of these has the band performing the title track: Que Sensación! The arrangement is by pianist Marc Bischoff.
The audio track on the next video is also a Marc Bischoff arrangement and is entitled A Puerto Padre.  See if you can pick up on what Lucas is laying down beginning at 4:54 minutes - it's a shame that we can't see his feet in action, too.  By the way, Lucas is holding his drum sticks in the "matched hands" position.
Earlier we featured the best in Latin Jazz by the Nettai Tropical Jazz Big Band based in Tokyo, Japan!
And now we follow with a Latin Jazz profile of a band led by a drummer based in Holland!!
The world is becoming such a cosmopolitan place.
Rest assured, wherever the best in Jazz is happening, we'll bring it too you here on JazzProfiles or should we say - JazzProfielens?
Posted by Steven Cerra at 7:00 AM

© Copyright ® Steven Cerra, copyright protected; all rights reserved. “The first time I heard Ahmad, I was in high school, I was getting r...