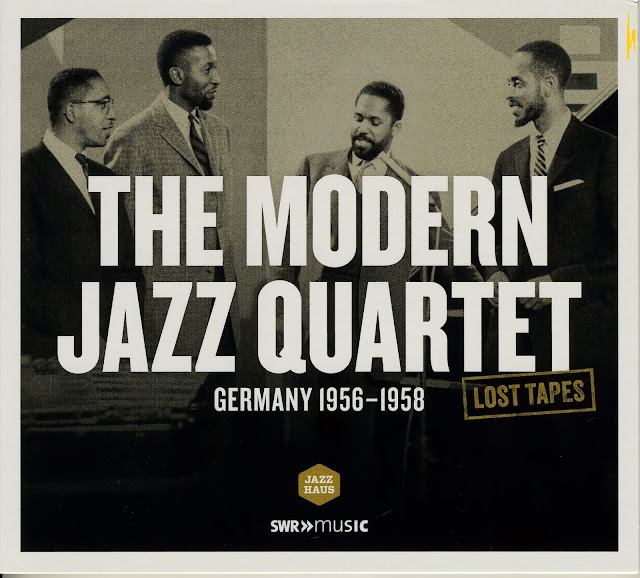 "This is the stuff collectors dream of. The numbers induce salivating: a literal trove of never-before-released live jazz recordings dating back to 1947, some 3.000 hours of music. In all, there are 1,600 well-preserved, German-made audio recordings and 350 TV broadcasts by more than 400 artists and groups... That's three down, 1,597 to go. Bring 'em on!"
- Jeff Tamarkin, JazzTimes

The editorial staff at JazzProfiles has written extensively about the previous JAZZHAUS releases in the . You’ll find a reprint of our March, 2013 background piece about the series below this posting about its latest release – The Modern Jazz Quartet in , 1956-1958: The Lost Tapes [101 731].

The CD is comprised of studio recordings made in and , 1956/1958 and live recording from Jahnhalle Pforzheim, 1957

Karl Lippegaus prepared the following sleeve notes under the rubric “Change Your Attitude.”

Who would have thought this quartet would confound revolutions in fashion and survive for 40 years? And how many are aware that its popular breakthrough came in in 1957? The conquest of the general public by these four gentlemen was more an act of seduction. The rhythm section of the Dizzy Gillespie Band formed the basis of the Modern Jazz Quartet (MJQ) in 1952. At the time of these recordings, John Lewis was still in the process of developing the unique concept of MJQ as a jazz chamber group and to use a wide variety of sources to create a style of jazz free of cliche. "Change your attitude" was the MJQ motto. Jazz to them was more than mere chance music, loose jamming and a lot of swing: it required new and innovative approaches. Change was also tangible in terms of the group's physical appearance - the four musicians wore tuxedos - and in the way they filed onto the stage. Everything was choreographed and exuded dignity.

The fact that Lewis, the man of ideas, was every inch an equal to his partner Jackson, the great improviser, is clearly audible in "Ralph's New Blues" (written by for the critic Ralph J. Gleason in 1955), where he leads in and out of his own solo with great formal sophistication. During a studio break following TV recordings, Joachim-Ernst Berendt, the dedicatee of "J.B. Blues", asked vibes player Milt Jackson to record a piece for the first time without rhythm section, mentioning the famous unaccompanied solo of Coleman Hawkins, "Picasso". And that is how the version of "Tenderly" came about. Each track exemplifies how John Lewis, to quote Andre Francis, turned four musicians into "a sensitive instrument which vibrates in the same universe of sound, achieving a communion unique in the world of jazz." 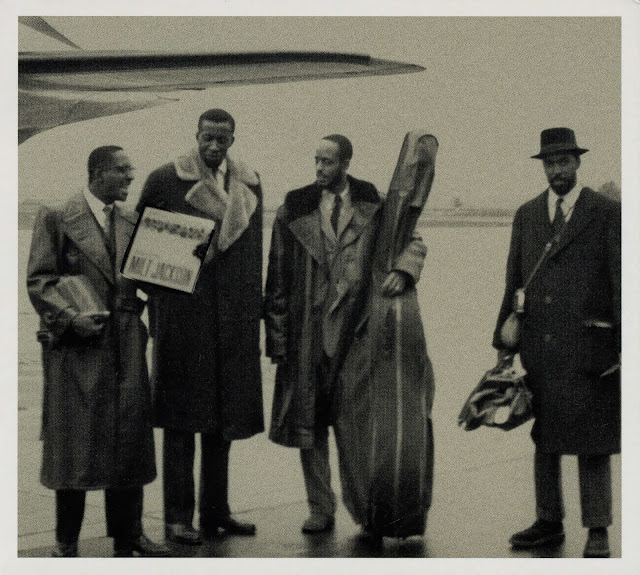 JazzHaus will continue to bring forth audio and video discs featuring “an indefinite number of audio and video jazz programs taken from live radio and television recordings from the archives of Sudwestrundfunk Stuttgart,  and  in southwest .

Jazz broadcasts by Sudwestrundfunk (SWR) started in the summer of 1947 with young impresarios Joachim-Ernst Berendt and Dieter Zimmerle. Today, almost 65 years later, the archives contain about 1,600 audio and more than 350 television recordings of all major modern jazz artists - probably the biggest collection of unpublished live jazz recordings in the world: 3,000 hours - and almost all of it has never been released before. More than 400 ensembles and soloists are listed - many of them recorded three, four, five or more times over the decades.

For the last three years, the JAZZHAUS team has been thoroughly researching the vaults, carefully making the final selections. The old tapes are currently being re-mastered to high-end technology standards and will be released on CD, DVD, vinyl, and as audio /video-on-demand downloads.”

Here’s some additional background information about the project.

Post-War  -  in particular - gave American jazz artists a warm reception. Following the nightmare of Nazism, Deutschland was a devastated country and culturally in ruins. The people warmly welcomed  soldiers who brought jazz to the nightclubs of their cities and later the big bands and ensembles to the major venues of their towns.

Many of the performers felt accepted and that their art was understood for the first time in their lives. Needless to say, these circumstances may have helped to improve the quality of their playing. Many of them remained in , finding new homes in , , , and .

It took the expertise of young Stunde Null jazz editors at the radio stations not only to invite top artists and ensembles but also to ensure excellent audio and (later) video results from the public performances. The superb acoustics of the newly built Liederhalle-Stuttgart turned many performances into an unforgettable experience.

In the vaults, we find exuberant music treasures (to name just a few): a jam session with Duke Ellington, Lester Young and The Modern Jazz Quartet (1954), a riveting recording of Art Blakey's Jazz Messengers made shortly after their first Blue Note recording (1958); a Quincy Jones big band television recording (1960).

All the most influential performers of free jazz and the so-called Third Stream are extensively recorded. We are gripped by the voices of Nina Simone, Carmen McRae, Ella Fitzgerald, Abbey Lincoln, or Cassandra Wilson. Blues artists are featured, with all the leading performers from B.B. King to Olu Dara. We experience the breakthrough of John Mclaughlin, Chick Corea, Gary Burton, Eberhard Weber, Jan Garbarek, Pat Metheny, and Bobby McFerrin and crossover artists like Jack Bruce and Ginger Baker.”

Each of the “Legends Live” JazzHaus CD is formatted in a six-pack: a tri-fold paper sleeve with cover art, tray plate information and a photo of the artist on the outside and insert notes in English and German plus the disc itself on the inside.

The sound quality of these recordings has to be experienced to be believed.  The re-mastering has complemented the original acoustics in which the performances were made to the point that the music almost jumps out at you.

And the artists respond to the obvious adoration that these German audiences put on display by bringing forth a series of first-rate performances.  There is nothing like the experience of “live” Jazz and these JazzHaus CDs go a long way toward underscoring this fact.

The late Jazz writer and essayist Mike Zwerin once said that after the Second World War, Jazz went to  to keep from dying.

If the music on these JazzHaus CDs is any example, Mike’s argument is well-substantiated as they leave little doubt that Jazz was alive and well in  from 1959 – 1977.

The following video montage is accompanied by the MJQ’s performance of Bluesology from The Modern Jazz Quartet in , 1956-1958: The Lost Tapes [101 731] with accompaniment provided by Orchester Kurt Edelhagen.