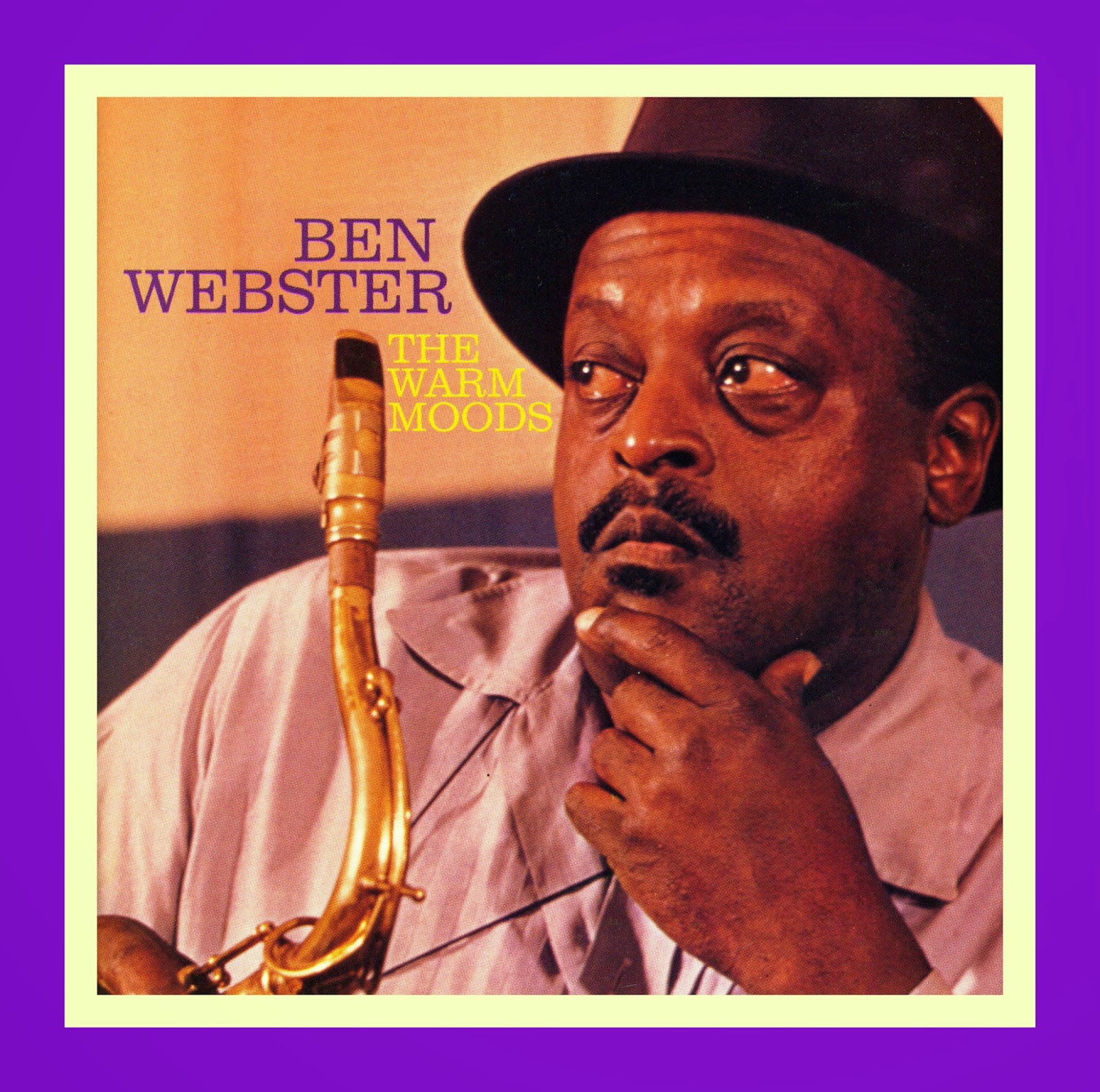 “As his playing indicates, even if you have never met the man, Ben Webster is a large, passionate jazz musician with great pride in his calling. Ben is capable of many forms of intensity, including explo­sive anger, but he is particularly prone to long bouts of extraordinary ten­derness. Ben is accordingly a superior player of ballads as this album demonstrates with especial consistency. Unlike many of the younger jazzmen who seem afraid or embarrassed to reveal their more vulnerable fantasies and memories, Webster personalizes ballads with as much virility and power as he does the stompers. Ben, moreover, has lived and traveled a good many years. He's paid a lot of dues, and is still paying. When he plays a ballad, therefore, he gives the listener the distilled experience of one of the last American frontiersmen, the itinerant jazzman.

Webster has a number of vibrant virtues as a musician and they all coalesce with most effect on ballads. There is his large, enormously warm tone. There is also his deeply flowing beat which is as pulsatingly relaxed (but not flaccid) in the slowest numbers as in the more rocking [numbers] …. A third character­istic is his thoroughly individual style-phrasing as well as sound.

There is yet a further reason for Ben Webster's mastery of ballads. Like the late Lester Young (who was also able to make even the most familiar standard suddenly new) Ben Webster has a great affection for and interest in the better singers. Several of his ideas for repertory have come from a vocalist's interpretation of a particular song. Like Young, Ben is also aware of lyrics and knows what the intent and particular mood of each song is before he begins to improvise on it….”
- Nat Hentoff

Has there ever been a more distinctive tenor saxophone sound than Ben Webster’s? One breathy buzz before a note sounds and you know immediately that it’s him.

The editorial staff at JazzProfiles can’t imagine why Big Ben hasn’t featured on these pages sooner.

To rectify matters, here are some excerpts from Whitney Baillett’s essay about Ben as found in his collection of forty-six pieces on Jazz, The Sound of Surprise, [1959].

The paragraphing has been modified from the original to fit the blog format.

“The saxophone, an uneasy amalgam of the oboe, clari­net, and brass families invented a century ago by a Bel­gian named Adolphe Sax, has always seemed an unfinished instrument whose success depends wholly on the dex­terity of its users. In the most inept hands, the trumpet, say, is always recognizable, while a beginner on the saxo­phone often produces an unearthly, unidentifiable bray­ing. Even good saxophonists are apt to produce squeaks, soughs, honks, or flat, leathery tones.

Thus, the few masters of the instrument—jazz musicians like Coleman Hawkins, Lester Young, Harry Carney, Hilton Jefferson, and Ben Webster (classical saxophonists usually play with a self-conscious sherbetlike tone)—deserve double praise. Ben Webster, the forty-nine-year-old tenor saxo­phonist from , has for almost twenty years played with a subtle poignancy matched only by such men as Hawkins and Johnny Hodges (from both of whom he learned a good deal), Lucky Thompson, Herschel Evans, and Don Byas.

A heavy, sedate man, with wide, boxlike shoulders, who holds his instrument stiffly in front of him, as if it were a figurehead, Webster played in various big bands before the four-year tour of duty with Duke Ellington that began in 1939. Since then, he has worked with small units and his style, which was developed dur­ing his stay with Ellington, has become increasingly puri­fied and refined. Like the work of many sensitive jazz musicians, it varies a good deal according to tempo. In a slow ballad number, Webster's tone is soft and enormous, and he is apt to start his phrases with whooshing smears that give one the impression of being suddenly picked up by a breaker and carried smoothly to shore.

Whereas Hawkins tends to reshape a ballad into endless, short, busy phrases, Webster employs long, serene figures that often (particularly in the blues, which he approaches much as he might a ballad) achieve a fluttering, keening quality— his wide vibrato frequently dissolves into echoing, ghost­like breaths—not unlike that of a cantor. His tone abruptly shrinks in middle tempos and, as if it were too bulky to carry at such a pace, becomes an oblique yet urgent and highly rhythmic whispering, like a steady breeze stirring leaves.

In fast tempos a curious thing frequently happens. He will play one clean, rolling chorus and then—whether from uneasiness, excitement, or an attempt to express the inexpressible—adopt a sharp, growling tone that, used sparingly, can be extremely effective, or, if sustained for several choruses, takes on a grumpy, monotonous sound. At his best, though, Webster creates, out of an equal mix­ture of embellishment and improvisation, loose poetic melodies that have a generous air rare in jazz, which is capable of downright meanness.”

The following tribute to Ben features him on When I Fall in Love with Mundell Lowe, guitar, Jimmy Jones, piano, Milt Hinton, bass and Dave Bailey, drums. It is from Ben’s 1958 Verve recording The Soul of Ben Webster about which Benny Green of The Observer wrote in his liner notes:

“In a way, the story of Ben Webster's career is the story of jazz music itself over the past twenty years. For reasons best known to them­selves, the jazz writers who today fall over them­selves to describe the richness of Webster's ap­proach, ignored Webster (among others) for years, concentrating all their energies on younger, more modern players. It is always a fine thing to welcome young blood and new approaches in any art form, but never at the expense of the great practitioners who have gone before.

Ben Webster's eclipse seemed so complete to one who was living three thousand miles away from the action, that in the early 1950s his name was beginning to convey nothing more than a faint feeling of nostalgia for the elegant structure of his "What Am I "Here For", "Chloe", and "Just a Settin' and a Rockin' " solos with the vintage Ellington of the early 1940s.

The very healthy tendencies of modern jazz over the last few years, the return of the earthiness which should never really be absent from the very finest jazz, the inevitable slackening of stylistic barriers which follows in the wake of any successful artistic revolutions, and the blessed ability of the musicians themselves to ignore the tidy theorisms of the analysts, has meant come­backs for Ben Webster's generation in no un­certain manner.”