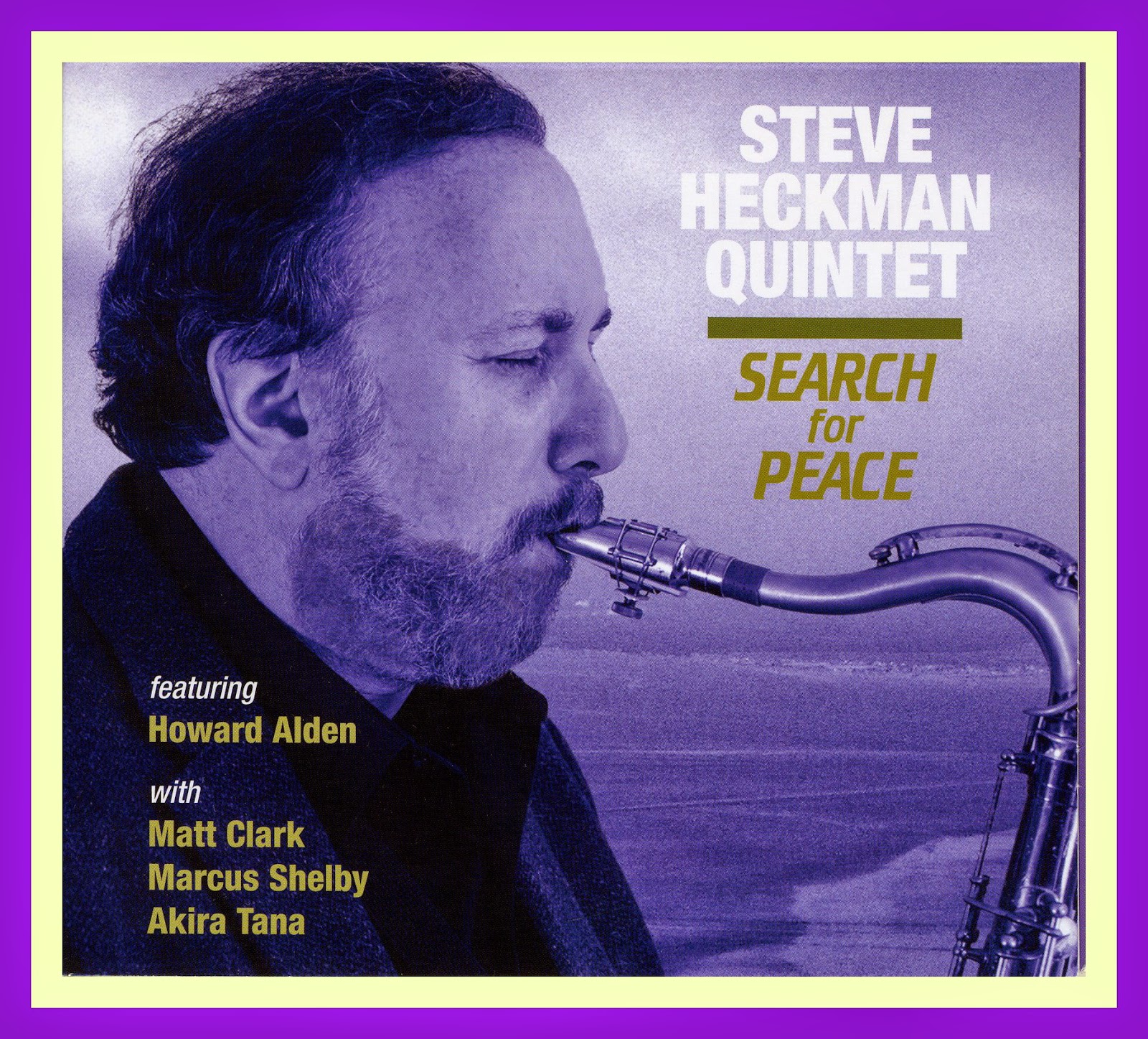 “SEARCH FOR PEACE, the fourth album by the acclaimed multi-reed instrumentalist Steve Heckman, is the exciting follow-up to Heckman's previous Jazzed Media outing, BORN TO BE BLUE, which remained on the JazzWeek chart for 12 weeks and reached the Top 20.

Featuring the same stellar musicians, including New York guitarist Howard Alden, on this release, Heckman plays tenor sax on seven tracks and baritone sax on two tracks, with Matt Clark trading his piano for the B3 to add a pinch of grease to the mix.

SEARCH FOR PEACE retains the same lyricism Heckman is known for, while delivering a hard-driving, straight-ahead set that pays homage to some of the greatest composers in jazz, including John Coltrane, McCoy Tyner, Thelonious Monk, Grant Green, Sonny Clark, Blue Mitchell and Randy Weston, as well as featuring an original composition by Heckman himself.”

Tenor saxophonist Steve Heckman’s name was new to me.

His latest CD - Search for Peace - which was recently released on Graham Carter’s JazzedMedia [JM 1069]  label thus fell into the category of a pleasant Jazz surprise, the kind that revolves around hearing a musician for the first time and knowing that you’ve found a new Jazz “voice,” one that helps you appreciate the music in a new way.

Great musicians, each of whom has an expressive sound on their respective instrument, a great selection of Jazz standards on which they perform terrific solos and music that is so well conceived and constructed that it creates in the listener a sense of satisfaction that comes from hearing Jazz played with intensity and a pulsating swing.

Steve introduces each of the musicians on the CD in the following insert notes to the recording and also gives a little background on why he chose each of the tunes that collectively represent one of the finest straight-ahead Jazz dates that I’ve heard in a long-time. 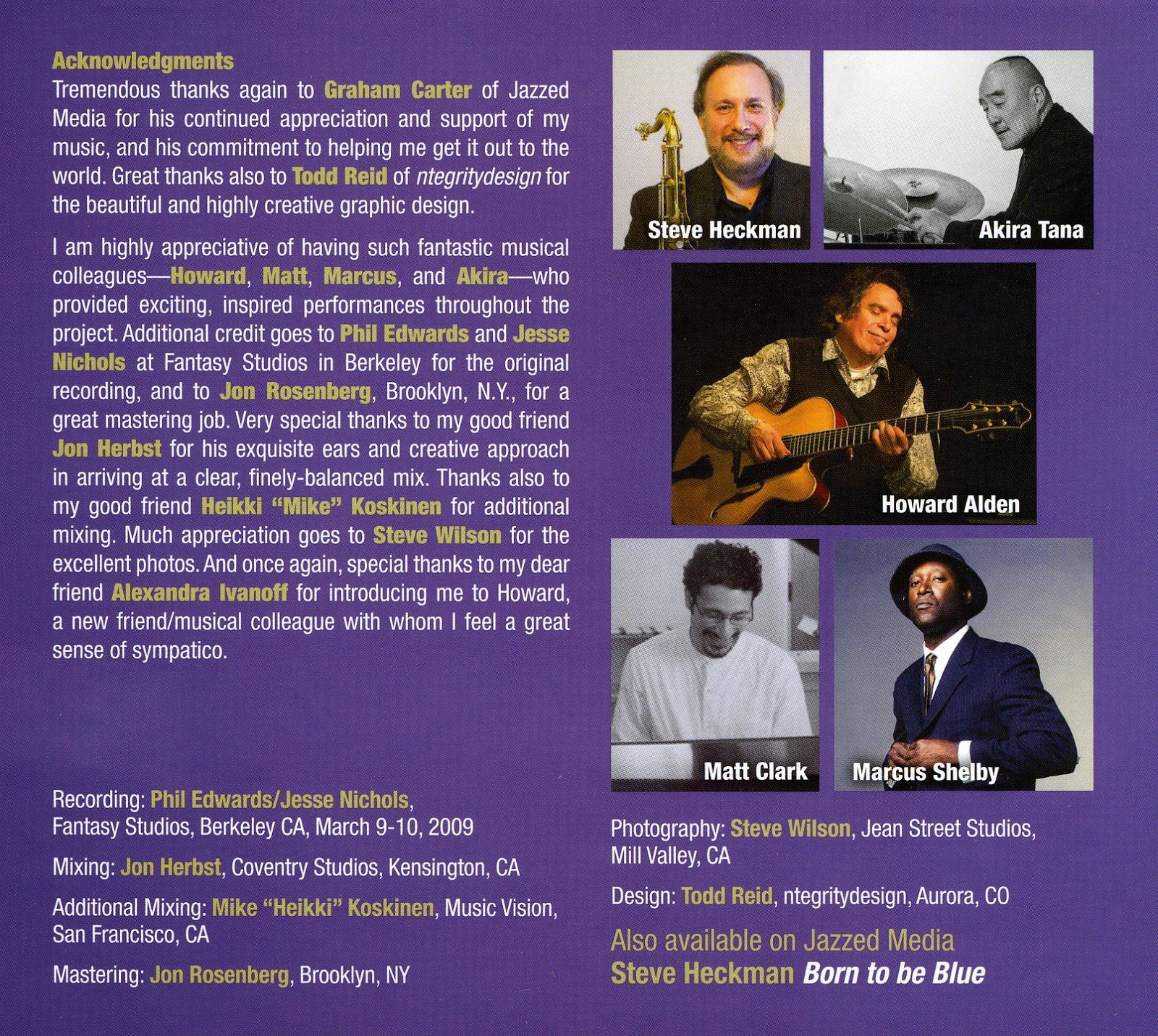 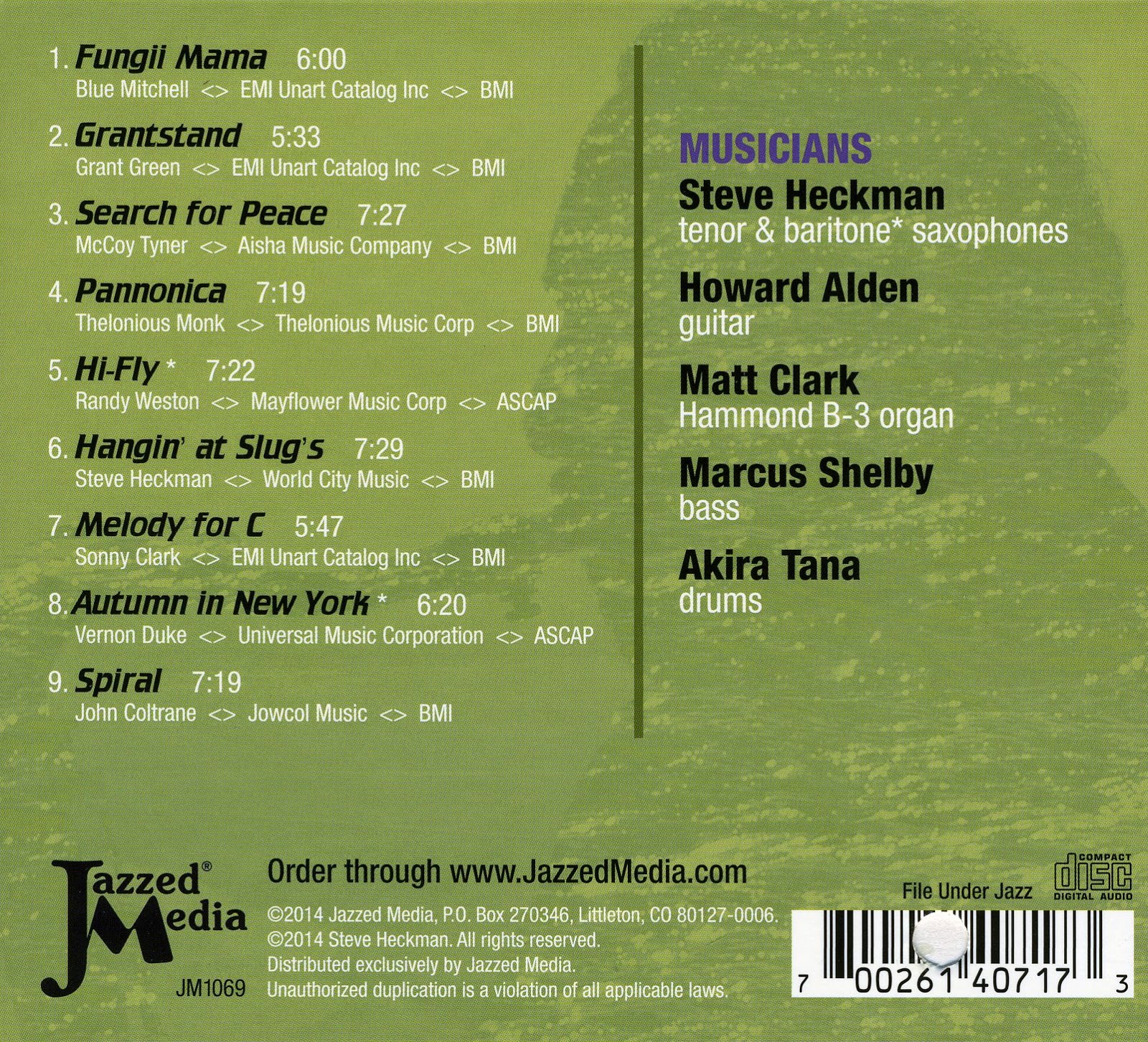 This collection of tunes comprises a 2nd set of recordings by a group that I previously assembled consisting of New York guitar virtuoso Howard Alden, in the company of 3 of the finest musicians in the San Francisco Bay Area: pianist Matt Clark, bassist Marcus Shelby, and internationally-acclaimed drummer Akira Tana. I was honored to have these wonderful players collaborate with me on a previous album, Born to be Blue (Jazzed Media, JM 1062, released in 2013), which focused on presenting fresh versions of standards from the Great American Songbook (for those unfamiliar with this term, the Great American Songbook is comprised of the many thousands of show tunes and popular songs that have been written since the early 1900s, and which many jazz musicians have used as vehicles for improvisation).

In a slightly different slant, most of the selections offered herein represent a sampling of what could be termed the "American Jazz Songbook," consisting of the compositions of a number of great jazz instrumental performers. For those who love the standards, I have also thrown in one of my favorite Great American Songbook ballads, as well as an original tune of mine. Additionally, this set of material features keyboard-master Matt Clark on Hammond B-3 organ rather than the acoustic piano on which he is much more frequently heard, to add a little bit of "grease." Whereas the previous album was rich in ballads and more introspective selections, the current set of material represents more of a straight-ahead "blowing session" in which there are no holds barred.

Fungii Mama is a highly-infectious and joyful calypso, written by the great trumpeter Blue Mitchell. (Neither I, nor anyone I know, can explain the meaning of the title). In any case, I loved this tune as soon as I heard it, and kept it in the back of my mind to perform and/or record someday. So here it is.

Grantstand is a "burner" by guitarist Grant Green from an LP by the same name, and is the most up-tempo of all the selections.

Search for Peace, the title tune, is a soulful ballad by pianist McCoy Tyner, a great vehicle to stretch out on.

Pannonica is a quirky (aren't they all?) but beautiful tune written by pianist Thelonious Monk, in dedication to the Baroness Pannonica de Koenigswarter, a Rothschild heiress who was a patron to countless jazzmen, most notably Charlie Parker and Monk. Although it begins as a walking ballad, it continues to build in intensity as the tune progresses.

Pianist Randy Weston's Hi-Fly, performed here on baritone sax, is done as a samba, which works surprisingly well on this tune, and is another high-energy feature in this set.

Hangin' at Slugs, the one original of mine, is dedicated to a long-defunct jazz club in the Lower East Side of Manhattan, which I frequented in my late teens growing up in New York City. It is an altered minor blues, with a definitively funky attitude.

Melody for C is a straight-ahead, swinging tune by pianist Sonny Clark.

Autumn in New York, by Vernon Duke, the only "Great American Songbook" standard in this set of material, offers another reminiscence of the Big Apple, performed on baritone sax, which lends a slightly darker timbre to this lovely ballad.

Spiral, by John Coltrane, was included in his seminal album "Giant Steps." The tune is built on descending chromatic chords which are simple, yet complex—and much more difficult to solo on than one might expect, due to the very fast tempo and quick movement of the chords.
I hope this diverse collection of material pleases your ears and souls.

Dan Bilawsky writing for All About Jazz said of Steve:

“Saxophonist Steve Heckman has absorbed bits and pieces of many masters ...a matte finish take on Sonny Rollins, a fondness for Zoot Sims, and a hint of Coleman Hawkins merge with the Trane influence to create something altogether different, yet totally traditional Heckman's music is straight ahead, built in the image of those who came before him, but his blend-born sound belongs to no one else...the soul and sound of a true saxophone sophisticate."

While I agree with Dan that Steve is respectful of the tradition, I also hear today’s tenor sound in Steve Heckman; cats like Joshua Redman, Joe Lovano, Eric Alexander, Don Braden, Chris Potter, and Mark Turner. He also reminds of New York-based, Ralph Lalama and Los Angeles-based Pete Christlieb, both of whom exhibit a heavy and unrelenting drive and full, rich tone in their playing.

See what you think while listening to him on Fungii Mama, the lead track on
Search for Peace - [JazzedMedia JM 1069].

Order information  is available via this link. 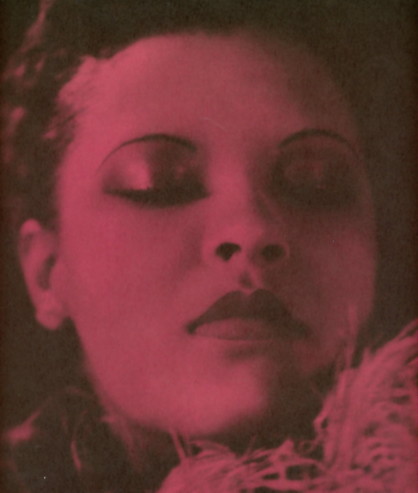