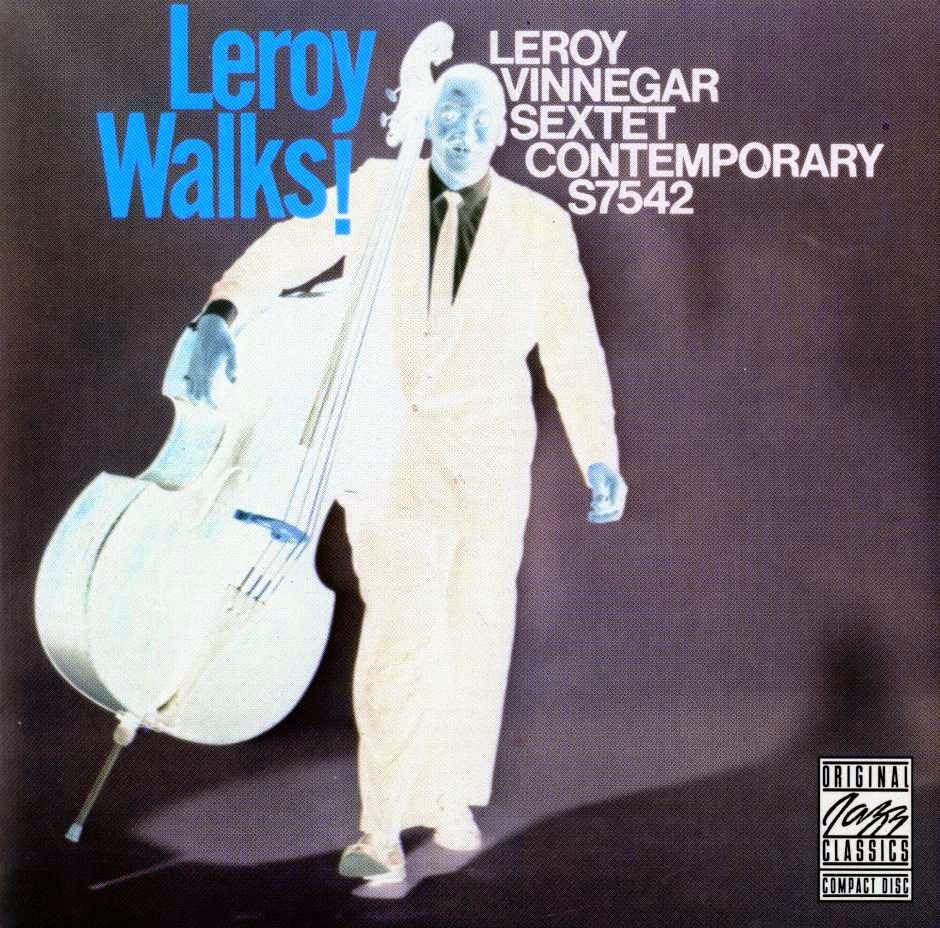 "I knew right away he had one of the best rhythm feelings of any bass player I have ever heard, and at that time, he didn't even have a good bass. . . I always ask him to play whenever he comes in where I'm working. . . I can't think of anyone who gasses me more as a rhythm player. . . His time really makes you want to get up and dance."
- Bassist Red Mitchell’s impressions of bassist Leroy Vinnegar

In 1957 and again in 1962 and 1963, Lester Koenig, the proprietor of Contemporary Records produced a number of sessions that resulted in two recordings that were issued under the leadership of bassist Leroy Vinnegar: Leroy Walks! [Contemporary S-7542/OJCCD-160-2] and Leroy Walks Again!! [Contemporary S-7608/OJCCD-454-2].

The six-year span of time between these recording sessions approximates the period when a “walking bass” was the epitome of a modern Jazz beat and no one on the West Coast Jazz scene played a walking bass line better than Leory Vinnegar.

The sound of Leroy’s fat-toned, walking bass was captured on dozens of records and was widely imitated by many young bassists. Composer Henry Mancini even entitled one of his themes for the highly popular NBC Peter Gunn television series after it. Walking Bass featuring studio bassist Rolly Bundock was subsequently used as incidental music in many of the TV show’s later episodes.

Laying down a good walking bass was considered de rigeur in order to create the proper “heartbeat of Jazz.” It’s metronomic quality had a driving effect on the rhythm section and they in turn pushed the soloist forward with an unrelenting swing. For the listener, the propulsive walking beat could be almost mesmerizing.

The esteemed Jazz writers Nat Hentoff and Leonard Feather, respectively, offer graphic explanations about the walking bass and Leroy Vinnegar’s association with it in the following excerpt from their insert notes to these, two Contemporary recordings.

Interestingly, Charlie Haden, Scott LaFaro and Gary Peacock, the three bassists who would create the more free-wheeling and interactive style of bass playing that replaced the walking bass line in modern Jazz were all living and working in Hollywood, CA during the height of Leroy’s popularity as a walking bassist! 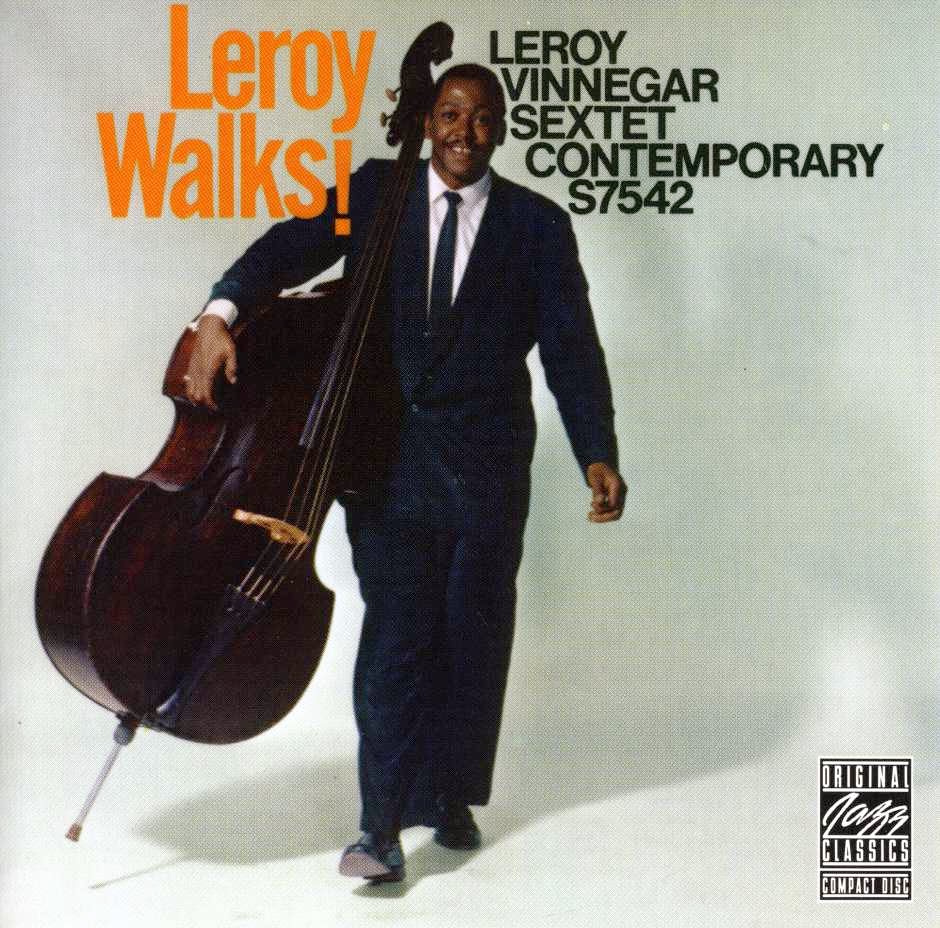 TO "WALK", IN JAZZ PRACTICE, according to The Encyclopedia of Jazz is to "establish a lively, four-beats-to-the bar rhythm (usually said of bass players: 'walking rhythm')."

Walking, besides, generally connotes the bassist's ability to make these four-beats-to-the-bar melodically meaningful in terms of the line he constructs underneath the soloist. A superior walker must possess not only unstumbling time but also the quality of ear that enables him to move from chord to chord with logic and functional taste. In short, walking isn't as easy or impersonal as it sounds;.... And among his contemporaries, it is generally agreed that Leroy Vinnegar is one of this generation's masters of that basic, peripatetic art.

Technical prowess alone is not sufficient guarantee of producing good walking. As in all of jazz, the emotional capacity of the bassists to "feel" the requirements of each specific situation — what the soloists and the performance as a whole need to lift them beyond just the playing of the notes into optimum personal and collective expression — is required. Vinnegar, because of his ability to project emotional power with insight has become a particularly valued member of any unit he joins. He provides, in a sense, a continually open reservoir of strength on which the soloist can "feed", in more than just the harmonic and rhythmic senses of that term. When musicians have to cut down on instrumentation — for economic or other reasons — the bass almost invariably is the last instrument saved (a fact too many club owners are unaware of).

One of the clearest ways to understand the reason for this general rule is to listen primarily to Leroy all the way through this album — or others on which he appears — and then try to imagine the music without him.

Another point concerning Leroy himself and the esteem with which he is regarded by musicians is that he is one bass player who really lays down a "bottom" for the music. He spends much of his time down in the A and E strings, so that his support of his colleagues has the solidest of foundations.

At the beginning of his career in Indianapolis (where Leroy was born July 3, -1928) he stayed at the bottom because it was harder as one went higher. But he began to realize that his spelunking deeply appealed to the musicians with whom he played. "They kept telling me, 'That's the way a bass should sound, baby.' So I stuck to playing that way."

Leroy began his professional career when he was 20 with local Indianapolis units, .... In 1952, he went on to Chicago, working for a time at the Beehive behind such visiting notables as Charlie Parker and Sonny Stitt. There was also a gig with Bill Russo at the Blue Note.

In August, 1954, he came to Los Angeles and worked with Barney Kessel at Jazz City. Red Mitchell heard him there for the first time: "I knew right away he had one of the best rhythm feelings of any bass player I have ever heard, and at that time, he didn't even have a good bass. . . I always ask him to play whenever he comes in where I'm working. . . I can't think of anyone who gasses me more as a rhythm player. . . His time really makes you want to get up and dance."” 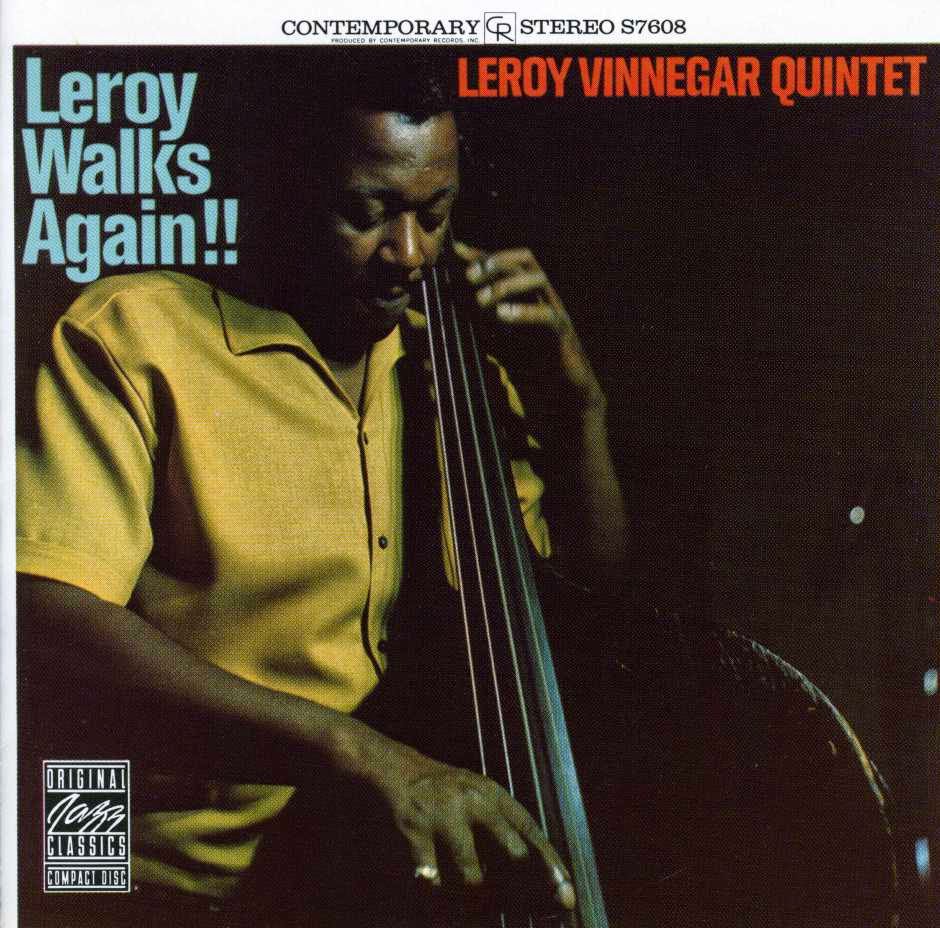 INDIANA,  A  STATE  THAT  PRODUCED  the  Montgomery brothers, the Candolis, the late Carl Perkins, Eddie Condon and J. J. Johnson, can be particularly proud of having produced two of the greatest masters of time in modern jazz history:  Big Sid Catlett and Leroy Vinnegar.

Time, in the jazz sense, is a term that has always been hard to analyze. Everybody knows what tempo is, and there is no problem in defining meter; but when you are trying to pin down time it has a tendency to keep slipping away from under the microscope. You can say that someone like Big Sid had it, that every rhythm section touched by his percussion magic was bound to swing. And you can say time is something that many musicians wish they had in the special way that Leroy Vinnegar has it.

Leroy at this writing has been part of the Los Angeles jazz scene for almost a decade, sinking his roots in Los Angeles in the summer of 1954, ….

For the past three or four years Leroy has been so consistently in demand on the California scene that a list of his credits would read like an alphabetical catalog.

Leroy's specialty, as those of us know who have followed his career, is the art of walking. That is, he keeps a brisk, invigorating four beats to the bar moving in long, horizontal lines, never neglecting the chord structure and managing to give this rhythmic promenade an essentially melodic feeling. Now and then … Leroy will take a solo that departs from the steady four-beat feel that has long been his main identification. But it would be out of character for him to turn the bass into a medium for a guitar solo. Basically, both in section and solo work, the quality that communicates itself most directly and contagiously to his colleagues and listeners is his powerful and completely dependable sense of the element noted above — time.
THE STURDY, ROCK-OF-GIBRALTAR QUALITY that has  earned  Leroy  the  respect  of  every musician with whom he has worked can be heard in bright relief throughout these sides