Michael Dees - "The Dream I Dreamed" 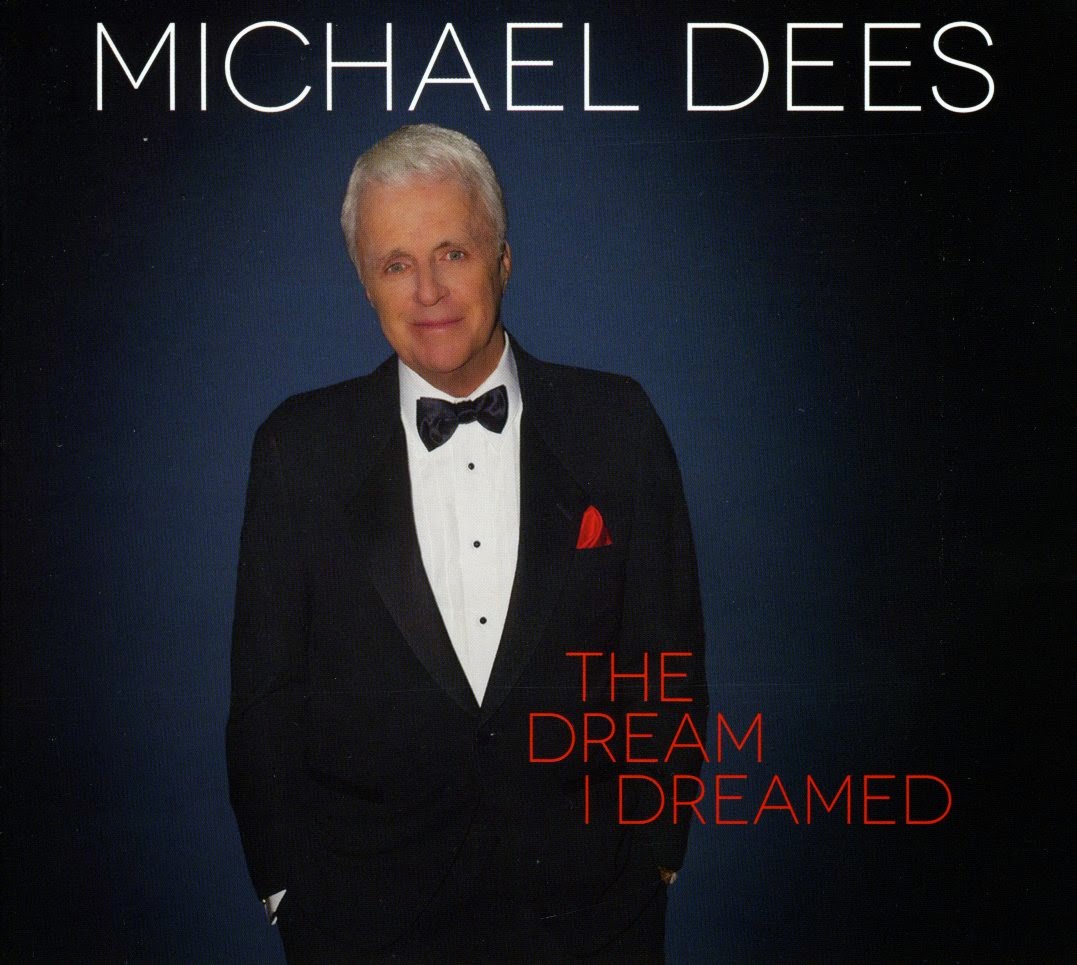 "His words and his music make a promise to us. His voice keeps it."
Arthur Hamilton

"Michael has spent his career singing other people's songs and making them sound better. This time around, Michael is singing his own songs and they sound great. Congrats, Michael!"
Johnny Mandel

In current Jazz Circles, there are two people whose opinion I’ve come to have a high regard for: Graham Carter, the owner-operator at JazzedMedia Records and Holly Cooper of Mouthpiece Music Publicity and Marketing.

So when I found out that both were associated with The Dream I Dreamed,  vocalist Michael Dees’ new CD which is due out on JazzedMedia Records [JM 1071] on May 12, 2015, I took notice despite the fact I was only indirectly aware of Michael’s singing.

Boy am I glad I did because as Holly and her team at Mouthpiece Music have commented about Michael: “Dees is a consummate singer who doesn't need superfluous embellishments to convey the essence of a song. His style invokes the best of the male jazz vocalist tradition, and his compositions are highly reminiscent of the Great American Songbook. His melodies have a lyrical quality that stays with you, and his lyrics are smart, sensitive and cohesive.

Dees is accompanied by a powerhouse band, each with a long resume of recordings and performances both as leaders and as sidemen with some of the biggest names in music.

Consisting of 14 fourteen original compositions by Michael Dees. The Dream I Dreamed is the work of an experienced, confident performer who deserves the wide public attention due a superb artist.”

What is particularly impressive about Michael’s singing is its poise and control. He doesn’t make the listener work at it; he just takes you there. Whatever the feeling that he is trying to convey - love, sadness, sorrow disappointment, happiness, joyousness - Michael brings it across and puts the listener in his music.

Like a poet reading rhyme or an author speaking a narrative or an actor inferring a storyline through gesture and persona, Michael is a professional singer who creates and experience for the listener through his music.

What Michael Dees does is tell stories through lyrics and music and he does so in such a convincing fashion that you want them to go on forever.

Michael Dees is an accomplished artist who has been honing his art for almost half a century and it shows on The Dream I Dreamed.

If you are into vocal music infused with hip Jazz inflections sung by someone who knows his way around a lyric, then Michael Dees The Dream I Dreamed  [JazzMedia Records JM 1071] is a can’t miss choice.

“A few years ago I first became aware of Michael Dees while attending The Los Angeles Jazz Institute's concert series saluting Frank Sinatra. Michael performed a marvelous concert of Frank Sinatra/Count Basie songs accompanied by the Frank Capp Juggernaut Big Band. What I remember most was that Michael did not do the usual Sinatra type singing impression but instead sang each song with his own very
special sound and approach, and in the process bringing new life to the songs from the famous Sinatra/Basie collaboration we all know and love. He really nailed the songs and had everyone in the audience swinging and swaying in their seats.

Michael's background is rather surprising in that he was born in Houston, Texas but you would never know that from talking with him. His accent sounds much more East Coast than Texan. Michael kicked around the U.S. professionally during the very late '50s and early '60s, finally settling in Los Angeles in 1961 (Michael currently lives in Palm Springs, CA). The '60s brought much travel throughout the U.S. as Michael played the Playboy Clubs while he concentrated on honing his jazz chops. ….

Starting in the early '70s Michael Dees embarked on a long term career move by performing in over 100 television and movie soundtracks. Recent examples include Sabrina and the singing voice of Frank Sinatra in HBO's The Rat Pack. During this period Michael has sung, written or produced hundreds of commercial "jingles" for radio and television.

Missing in all this activity are any jazz vocal recordings by Michael since the '60s, until the recently formed Mack Avenue label asked him to do an album in 2001 (One Single Rose). Unfortunately that was Michael's only recorded jazz output of the past few years, until now.

My goal in starting the Jazzed Media label in 2002 was to give deserving jazz artists a home to perform and record music for release. This new release from Michael is a further step in that process by hopefully giving one of the great male jazz singers the recognition he so richly deserves (and has earned).

What makes this new album of Michael's so exciting is that he also wrote the words and music. It is unusual today to find this combination in male jazz vocalists. There is a sincerity in what Michael writes and sings. He strips away most of the flower and ornamentation we are used to hearing from male jazz vocalists singing the Great American Songbook and instead gives us an intimate reading of love's challenges and joys. This is a man speaking and singing from the heart and a road well-traveled….”

Michael Dees is a rarity in jazz. He's a singer who writes music that is lyrical and lyrics that are poignant and emotive. The Dream I Dreamed, Dees' newest recording as a leader since his 2002 release One Single Rose, features 14 fourteen of his own original compositions, accompanied by some of the finest musicians on the West Coast.

Dees may be the most famous singer you never heard of. His long list of accomplishments stretches back to the 1960s when he was featured several times on The Steve Allen Show and recorded a complete album of his music. He was voted "Best New Male Singer" at the 1968 International Popular Song Festival in Rio de Janeiro where he met Elmer Bernstein, which led Bernstein to ask Dees to record the song "A Walk in the Spring Rain" for the soundtrack of the movie of the same title. He recorded two albums for Capitol Records, including Talk to Me Baby, which featured several Alan & Marilyn Bergman songs. The famed songwriting team liked his work so much, they asked him to sing their well-known tune "What Are You Doing the Rest of Your Life" for the soundtrack of the movie The Happy Ending. In the 1970s he began a long career as a studio singer, performing on over 100 television and movie soundtracks, including as the singing voice of Frank Sinatra in HBO's The Rat Pack and recording songs on the soundtrack to Sabrina, the 1995 movie starring Harrison Ford. He has also sung, written or produced hundreds of commercial "jingles" for radio and television.

Dees' voice is warm and full of colors. He knows how to cut to the heart of a lyric and sings with great nuance but without extraneous ornamentation. Although he penned these compositions within the last 10 years, they are incredibly reminiscent of the Great American Songbook. Had he written them earlier, they surely would be considered part of that timeless pantheon.

When asked where he gets his inspiration when he writes, he replies, "From every song I've ever heard." Judging by these songs, he's certainly heard a lot of them. The tunes on this disc are stylistically diverse. There are swingers like the opening "In A Moment" to gentle ballads like "I Miss You" and "Look At Me" to jazz waltzes like "A Long Time Comin'." He even captures a Dixieland feel with "Back In New Orleans." His melodies stay with you long after you've heard them, and his lyrics tell stories that are full of passion and longing. His songs are notably articulate and cogent, which Dees achieves by reading the lyrics out loud when he's writing, as if he were performing a monologue in a play.

The musicians on the project are leaders in their own right. The fantastic rhythm section comprises four legendary musicians, including Terry Trotter on piano, Chuck Berghofer on bass, Steve Schaeffer on drums, and Don Williams on percussion. The horn section is no less august with the Doug Webb and Chuck Manning on tenor sax, Bob Sheppard on tenor sax and clarinet, Sal Marquez on trumpet, and Steve Huffsteter on trumpet and flugelhorn.

The Dream I Dreamed is the work of an experienced, confident performer who evokes the best of the male jazz vocalist tradition. With his warm, intimate voice, memorable melodies, and affective lyrics, Michael Dees deserves the wide public attention due a superb artist.

The Dream I Dreamed is available through www.JazzedMedia.com,  Amazon and iTunes.

The following video features Michael singing Look At Me track from the new CD.