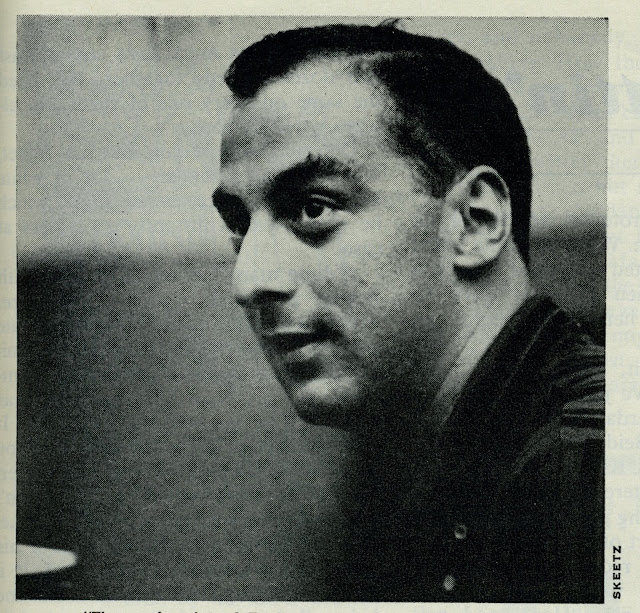 Regular visitors to these pages are by now familiar with the personal and professional relationship I had with Victor Feldman during his and my formative years on the West Coast Jazz scene in the late 1950’s. He was my teacher and my friend.

Victor, who passed away in 1987, was best known as an excellent pianist, vibraphonist and composer [he penned Joshua and Seven Steps to Heaven both of which were recorded by Miles Davis]. He also performed with alto saxophonist Cannonball Adderley’s quintet and recorded with trombonist J.J. Johnson’s quartet, before resettling in Los Angeles and becoming a fixture in the West Coast Jazz scene and a mainstay in the southern California studios.

What most musicians in the States were not aware of is what a brilliant career as a drummer Victor Feldman had before coming to the USA in 1956 to perform with Woody Herman’s Band primarily as a vibraphonist.

Woody knew. He knew he had a Buddy Rich-quality drummer in Victor and every night he would feature him in what was essentially a 10 minute solo on drums and congas on Mambo the Most [The Mambo swept the USA as a dance craze during Victor’s time on Woody’s Band although I would challenge anyone to dance to the stuff that Victor was laying down during his time in the solo spotlight].

Victor’s comments about drummers in England and Europe should be taken in this context - he knew what he was talking about. The fact that calf-skin drum heads were still in wide use in abroad should also be kept in mind [American drummers had already made the switch the plastic heads which held the tension better and as a result got a sharper more crackling snare drum sound].

At the time of Vic Feldman's last Blindfold Test (Down Beat, Dec. 22, 1960) he had been with the Cannonball Adderley Quintet for a couple of months. The association with Adderley, which lasted for nine months, was priceless in two respects.

It gave Feldman the most significant musical experience of his adult career, one from which he emerged an even better musician; and it earned him a degree of acceptance among jazz fans and critics that would have been hard to come by in any other surroundings.

For his latest test, I included a couple of items with special relevance for him: the Kenny Drew track includes his rhythm section teammates from the Adderley quintet; Woody Herman was his first employer after he arrived in this country almost six years ago; the Jazz Couriers, of course, include musicians he knew and worked with in England. He was given no information about the records.

“The organ player might have been Shirley Scott, but it sounded a little more to me like a man playing. I notice a Fender bass in there; that could have been Monk Montgomery. I don't know who was on tenor or trombone. The trombone player sounded as though he was very much influenced by Bill Harris. I think they got a groove for what they were trying to do. It came off well. Four stars.

I think that was Woody Herman's band, and the tenor player on the first chorus sounded a lot like Zoot. The trumpet sounded like Nat Adderley. The arrangement ... I don't know . . . sounds a little like Al Cohn.

I didn't like the recording; it was sort of echo-y. I don't know if that's the band Woody's been traveling with, because it sounds like they just got together for that date. The vibraphone player sounds like the one who plays with Buddy Rich — Mike Mainieri — I'm not sure. I've heard so many better, really swinging records by Woody. Two stars.

I'll start with the rhythm section: I think the bass player's Sam Jones, the drummer sounds like Louis Hayes — I'm not sure, and the piano sounds like Barry Harris — here I'm not sure because I've heard him play much better than that.

I worked with Sam and Louis with Cannonball. Being with that group did me a world of good musically. The tenor player played like Sonny Stitt used to play, but I'm sure it's not Sonny. Could be Hank Mobley. The trumpet ... is there a trumpet player named Freddie Greenwood? The record was swinging . . . played well. Four stars.

The soloists didn't have much to say. Coltrane can do this kind of thing and make it interesting. Two stars.

That was Cannonball and Nat Adderley. The record must be two or three years old; I think Sam's on bass, and the piano player could have been Junior Mance. I don't know the drummer; it didn't sound like Louis. I enjoyed listening to it ... it was good . . . not exceptional.

The group has changed. Nat and Cannon both play differently now — like all musicians, the longer we play, the more we hope we improve. They're much greater now, yet the standard and the feeling are still there. Now they have more excitement and group feeling. They had more when I was with them than they do here. Three stars.

Sounds like an English group. The tenor player sounds like Tubby Hayes, but he didn't take a long-enough solo for me to really tell. The ensemble playing sounded like Tubby. The vibraphone player . . . that threw me a curve . . . gets a very nice sound. I don't know anyone in England who sounds like that. There's a vibraphone player in this country, whom I heard a couple of years ago, who's very good — Bobby Hutcherson — but I don't know how he sounds now.

The recording ... the general sound ... the drums ... the whole rhythm section . . . make me believe that it is an English or a European group.

Quite a few musicians, orchestrators, and arrangers I've spoken to here feel that they record better in England. I don't agree. The difference is partly the recording and partly the performance. The weak point of English jazz is the rhythm sections. They don't have the same environment musicians do here. They don't see these musicians all the time in person and talk to them and discuss things as they can here.

Drummers in England play in clubs which are underground and very damp, so they have a terrible job tuning their drums; it really makes a difference. Rhythm is improving though. There are a couple of wonderful bass players — Kenny Napper — in fact, that could have been him here — and Lenny Bush. I heard some good drummers, too, when I was there a couple of months ago. I recognized Terry Shannon on piano. Two stars.

That was John Coltrane playing soprano sax, and the piano player was McCoy Tyner. It's a very pretty tune; I like the changes Tyner plays. All I can say is that it was pleasant. The saxophone sounded out of tune on a few notes.
I hate to be unenthusiastic, but I think this deserves three stars.