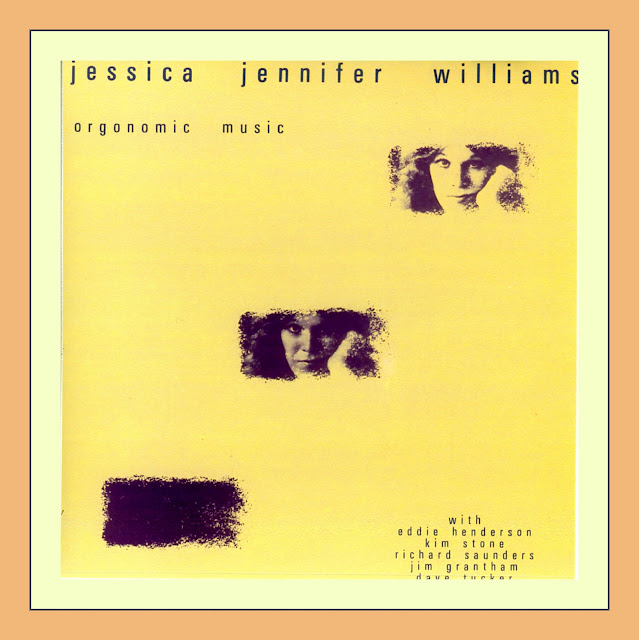 I first “met” Jessica around 1980. This was back in the days when one could kill a few minutes waiting for a business appointment or a luncheon while perusing the local record store.

Usually privately-owned and operated, every community in southern  seem to have one and some of these Mom-and-Pop stores even had a Jazz section.

It was during one such diversions that I noticed an LP in the cut-out bin by Jessica Jennifer Williams entitled Orgonomic Music [Clean Cuts CC703]. On the back of the album sleeve was the following quotation by Wilhelm Reich:

"Love, work and knowledge are the well-springs of our life. They should also govern it.”

I didn’t know who Reich was, nor did I know anything about “Jessica Jennifer Williams” and the only musician in the sextet featured on the album that I was [barely] familiar with was trumpet player Eddie Henderson.

But what the heck, Philip Elwood of The San Francisco Examiner said of Jessica that she was a devotee of Reich’s whose sentiments I agreed with, the LP was only a buck, so I gave it a shot.

Boy, am I glad I did. I’ve been listening to everything I can get my hands on by Jessica ever since.

However, it wasn’t until 1992, thanks to a fortuitous business trip to , that I had the opportunity to hear Jessica in person as a part of pianist Dick Whittington’s on-going Maybeck Recital Hall series.

I “stayed close” to Jessica’s music in the 1990’s thanks to my association with Philip Barker, the owner of Jazz Focus Records for whom Jessica made a number of recordings including her Arrival CD which has the distinction of being the very first disc issued by Philip’s label [JFCD001]. 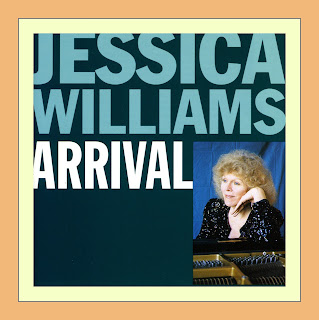 Thanks to a tip from  in one of his JazzLetters, I was also able to score one of the limited edition [1,000] Joyful Sorrow compact discs that Blackhawk Records issued as her solo piano tribute to the late, Bill Evans.

It was recorded at The Jazz Station,  on  on the 16th anniversary of Bill’s death.

Sadly, too, The Jazz Station in  is no more, but Joyful Sorrow endures as just about my all-time favorite Jessica recording. 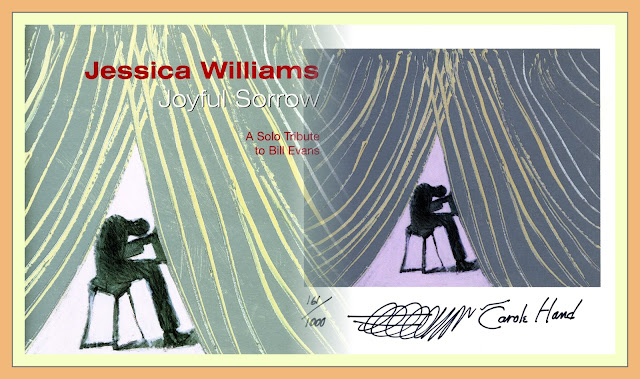 Thankfully, Jessica has subsequently released quite a number of solo piano and trio Jazz recordings, many of which are available as audio CD’s and Mp3 downloads.

Jessica is a powerful and pulsating pianist.  He music literally “pops” out at the listener it’s so full of energy and enthusiasm.

She records many solo piano albums, a format which can sometimes be a recipe for self-indulgence and excessive displays of technique.  But Jessica’s music is always tasteful and informed. You can hear the influences from the Jazz tradition in her playing, but you also hear innovative probing and forays into her unique conception of what she is trying to say about herself and how she hears the music.

Her touch on the instrument is such that she makes the piano SOUND! It rings clear and resonates as it only can in the hands of a masterful pianist.

As Grover Sales, the distinguish author and lecturer on Jazz has commented:

“Jessica Williams belongs to that exclusive group Count Basie dubbed "the poets of the piano" that includes  Kellaway, Sir Roland Hanna, Ellis Larkins, Jaki Byard, Bill Mays,  Broadbent, Cedar Walton, the late Jimmy Rowles and of course, Bill Evans. All share in common a thorough working knowledge of classic piano literature from pre-Bach to contemporary avant garde as well as the classic jazz tradition from Scott Joplin to the present.

All developed an astonishing and seemingly effortless technique that enabled them to venture anywhere their fertile imaginations wished to take them. All take to heart the dictum of Jelly Roll Morton in his epic 1938 interview for the Library of Congress: ‘No pianist can play jazz unless they try to give the imitation of a band.’

And for all of their varied influences from Earl Hines to Bill Evans and beyond, all are instantly identifiable—unique in the literal sense of this often misused word.” 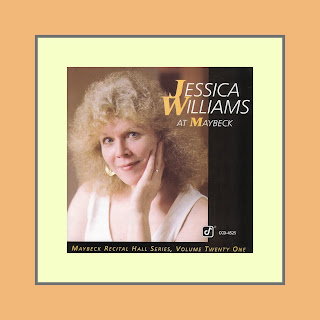 “It's all there in the first track. Within a few choruses, Jessica Williams shows her hand, or hands: the harmonies in seconds (hit way off to the side of the piano), the punchy attack, the dust-devils in the upper octaves, the nutty quotes. It's familiar Jessica, but she's got plenty up her sleeve for the rest of this remarkable entry in the Maybeck menagerie. …

She came to my awareness as a word-of-mouth legend, a Baltimore-bred genius whose history and personality were said to be as mysterious and unpredictable as her keyboard inventions. As soon as I got to hear her, I was into the reality of her spontaneous magic and not much concerned with the legend. …

[She] has remained a best-kept secret … commanding awe and quiet in the clubs she visited … [her playing] filled with energy and imagination.”

One gets more about her sense of “energy and imagination” when one reads the following notes that Jessica wrote about herself and her music for her Intuition CD [Jazz Focus JFCD 010]:

“I'm occasionally asked where I studied to learn to do what I do; who taught me, what "tricks" are involved, what secrets enable me, how does the process occur... how does one "distill magic out of the air?" The truth is that there are no practice techniques, no miracle drugs, no mantras, no short-cuts to creativity. I tell them that I've played piano since I was four, that I've played jazz since I was twelve, that I've never taken another job doing anything except what I've always known I should be doing in this life: playing music. And maybe that's a part of the answer, if indeed there is one. It's about Castenada's , 's BLISS; you follow it no matter where it leads, and over many years you learn to control it, channel it, allow it to happen.

You become the bow; the arrow is the gift. You never fully own it, just as you can never explore all of its depths, because it springs from the infinite possibilities within you. In this realm, your only ally, your only guide, is intuition. It is seeing instead of looking, knowing instead of believing, being instead of doing. It is Coltrane on the saxophone, Magic Johnson on the court, Alice Walker on the printed page; it is the primary intuition of "right-brained" activity, the birthing of idea into existence.

Perhaps it cannot be taught, but it certainly can be shared...and it is in the sharing that we all experience the best parts of ourselves. We instinctively intuit our organic truth; when we learn to live it, our planet could be paradise.

Your dreams are your sacred truth. …”

You can listen to Jessica’s quite stunning pianism on the audio track of the following video tribute to her on which she performs Alone Together from the Joyful Sorrow Bill Evans tribute CD.