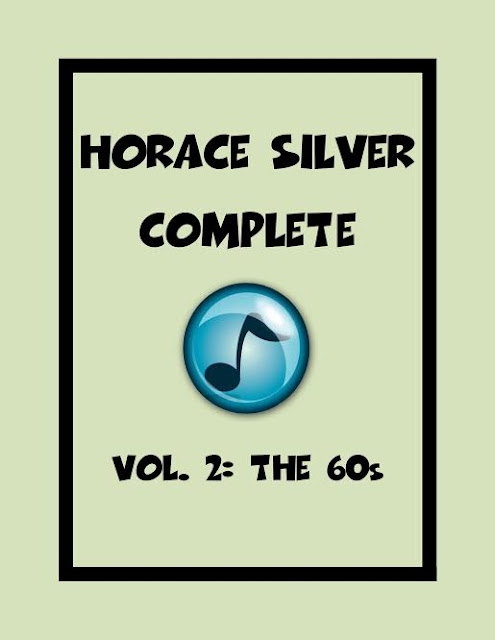 The following post is probably for a more select audience but we wanted to give Jay Glacy’s efforts a boost by posting the information about his latest book on Horace Silver’s compositions to the blog.

From a more general perspective, I don’t think I ever met a Jazz fan who didn’t like the music of Horace Silver.

Put directly, I find the music of Horace Silver irresistible. When I listen to it, I feel happy, joyous and free.

Each of Horace’s tunes seems cut from the same cloth: rocking beats, nothing too quick but nothing that dawdled; sashaying minor melodies, voiced in clean unison by tenor and trumpet with riffing interjections from the piano; gospel and the blues seeming to soak into every eight-bar passage.

Compared to the careening tempos and linear charge of ‘true’ Bebop, this music might have seemed almost too simple, a reduction rather than a development. But Silver’s group opened up possibilities in other ways.

His themes had a melodious side to them, which the slash-and-burn tactics of bop had little time for. It was listening music, but it opened the door to backbeats, a grooving motion which audiences tired of abstraction were ready to welcome.

In the new black popular music – typified by the kind of [rhythm and blues] output which Atlantic …. was making money from in the 1950’s and 60’s, Bebop had no place. But Horace’s blend of funky sophistications could take a seat at the table.

Always bright and bouncy, Horace used a number of compositional devices to keep his music full of surprises.

For example, The Outlaw, is vintage Horace with its twists and turns containing all sorts of surprises due to its unusual structural form.  Like Ecaroh, another Silver original,  it employs both 4/4 straight-ahead and Latin-inflected rhythmic passages, but The Outlaw does so within an asymmetric construction that employs two sections of thirteen [13] bars divided into seven [7] measures of straight-ahead 4/4 and six [6] of Latin rhythms, a ten [10] bar 4/4 section which acts as a bridge followed by a sixteen [16] bar Latin vamp [or Latin pedal] with a two [2] break that leads into the next solo.

It’s a masterpiece whose seemingly disparate parts generate a powerful “tension and release” effect that will leave you wanting to listen to this sprightly bit of musical magic over and over again.

If you can read music and  want to know more about how Horace put his music together, do yourself a favor and treat yourself to a copy of one of Jay’s books.

“Hello, Steve. I am pleased to announce that Horace Silver Complete Volume 2: The 60s has just been published by Really Good Music LLC, the leading music publisher serving the professional jazz community. This new volume contains all of the tunes written and recorded by Mr. Silver during the 60s. These 49 enhanced lead sheets document indelible performances of tunes many of which have become jazz standards. As editor, I have included many of the ancillary musical elements (like bass lines, harmony parts and shout choruses) that create that unique Silver touch. A sample is attached.

You can order the book on Amazon or by remitting $19.95 via PayPal to this email - jay.glacy@excite.com - address for the PDF version. And stay on the lookout for the companion book Horace Silver Complete Volume 3: The 70s, forthcoming. Many thanks. Jay Glacy.”

Songlist:
The African Queen, Ah! So, The Belly Dance, Blue Silver, Bonita, Brain Wave, Calcutta Cutie, The Cape Verdean Blues, Dimples, Doin' the Thing, Down and Out, The Dragon Lady, Filthy McNasty, Grease Peace, The Gringo, Horace-Scope, It Ain't S'posed to Be Like That, It's Time, The Jody Grind, Jungle Juice, Kindred Spirits, Kiss Me Right, Let’s Get to the Nitty Gritty, Lonely Woman, Mary Lou, Me and My Baby, Mexican Hip Dance The Natives Are Restless Tonight, Next Time I Fall in Love, Nineteen Bars, Nutville, Pretty Eyes, Psychedelic Sally, Que Pasa?, Rain Dance, The Risin’ Sun, Sayonara Blues, Serenade to a Soul Sister, Sighin' and Cryin', Silver Treads Among My Soul, Silver's Serenade, Skinney Minnie, Song for My Father, Strollin’, Sweet Sweetie Dee, The Tokyo Blues, Too Much Sake, Where You At?, You Gotta Take a Little Love