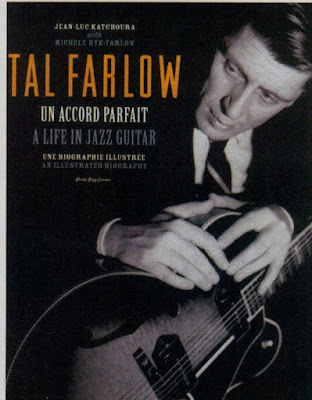 One of the most frequently accessed posts in the JazzProfiles archives is our featured entitled “Tal Farlow: Jazz Guitar and Bebop.”

I’ve said it before but it bears repeating - Can you imagine picking out Art Tatum solos note-for-note on the guitar while listening to them on records? - that’s exactly what Tal Farlow did and the incredulity of this achievement only increases each time I repeat it.

And the amazing thing about Tal’s accomplishment is that it is only magnified when one considers the fact that he was a completely self-taught musician!!

Jean-Luc Katchoura has written a new book about Tal and I thought his many fans might enjoy reading the following review by John Epland.

“For fans of guitar great Tal Farlow, for anyone who loves jazz guitar, or for those who just love getting another slice of 20th-century jazz history, Jean-Luc Katchoura's Tal Farlow: A Life In Jazz Guitar (Paris Jazz Corner) is a worthwhile contribution. "Tal Farlow was the man, as far as that was concerned," says George Benson toward the book's end. "I played concerts with him, and he wiped us out. But I never felt so good getting beat up." Benson's quote is one of many pulled from Down Beat's archives that augment the telling of Farlow's story.

There are entries to A Life In Jazz Guitar from other sources, including Katchoura's conversations with Farlow, album liner notes, quotes from Guitar Player magazine, the New York Times and various foreign press. It's a soft-focus remembrance laced with dates, places, names and songs, starting with Talmage Holt Farlow's birth in Revolution, North Carolina, on June 7, 1921, and ending with Farlow's death at age 77 on July 25,1998, in New York City.

Drawn to music, early influences Charlie Christian and Art Tatum are complemented by the stronger pull of beboppers Charlie Parker, Dizzy Gillespie and Bud Powell. Self-taught, Farlow couldn't read music, but that didn't keep him from blooming during his greatest decade of achievement, the 1950s, most famously with vibraphonist Red Norvo and bassist Charles Mingus.

Published in both English and French, Katchoura's well-researched 344-page tribute, with help from Farlow's widow Michele, puts the focus on Farlow's music. Katchoura and Farlow, incidentally, met in 1983, Katchoura working as the guitarist's agent for a European tour the following year. The two remained friends until the end.

Perhaps more striking than the story in words to this hardcover, coffee-table book is the remarkable series of photos and reproductions of album covers, advertisements and press coverage (including more than a few DownBeat covers spanning the decades). Whole pages are set aside to showcase major episodes, including Farlow's first album under his own name (his 195410-inch Blue Note eponymous release) and recording-session contact sheets. All told, there are over 400 illustrations, including 150 never-before-published photographs, that compete with the quotes and commentary. An attached CD includes Farlow playing both at home and in concert with, among others, guitarists Jimmy Raney, Gene Bertoncini and Jack Wilkins. An impressive illustrated discography, filmography and bibliography of cited media references, and extensive portraits of important collaborators Norvo, Mingus, Jimmy Lyon and Marcia Dardanelle, fill out the rest.

Historically, Katchoura appears to have covered all the bases. His discussion of the racial tensions surrounding the presence and departure of Mingus in the Norvo trio indicate an openness to what little controversy seemed to exist in Farlow's professional and personal life. According to Katchoura, in 1951, as the Norvo trio was set to perform for a CBS TV special, Mingus was flagged by the primarily white members of the New York musician's union for not having a cabaret card. Facing pressure from CBS producers and the union, Norvo decided to replace Mingus with white bassist Clyde Lombardi, which enraged Mingus. Controversy aside, that same television show's producers, excited about launching their inaugural program of color TV nationwide, insisted that Farlow's guitar be seen in bright red. Farlow deferred to Gibson instead of submitting to what was perceived as a ridiculous first-request.

Years later, as Farlow remained in "semi-retirement," as a sign painter in Sea Bright, New Jersey, the first half of the 1960s would see the guitarist's growing interest in electronics and design take hold as he worked with Gibson to develop his own "Signature" guitar, and, as the decade proceeded, other guitar innovations followed, among them a preamp and octave-divider pedal.

Farlow's late-'60s reemergence on the club and festival circuits brings the story full-circle. As before, Katchoura continues in great detail to describe Farlow's ongoing recording projects that ended up as documents to a familiar sound now newly discovered. His accounting of Farlow's last years and days is a touching send off, as friends, family and musical colleagues emerge to pay tribute to a beloved jazz icon who, no surprise, also happened to be a pretty nice guy.”

Here’s the link to Tal Farlow: Jazz Guitar and Bebop.
Posted by Steven Cerra at 8:30 AM