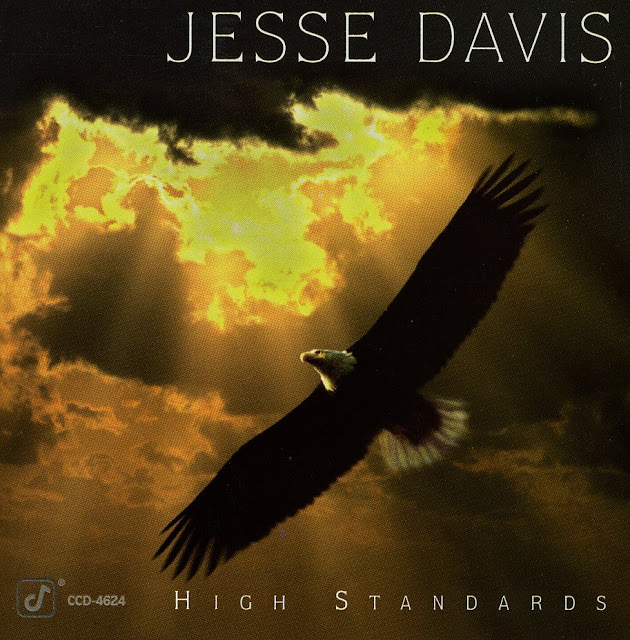 “The nice thing about this record is the choice of material. Davis on alto along with Nicholas Payton on trumpet, Robert Trowers on trombone ably supported by a rhythm section of Dado Moroni on piano, Peter Washington on bass and Lewis Nash on drums all contribute to a record that sounds confident, unfussy and … completely individual. This is how contemporary Jazz is supposed to sound: balance, wry and aware.” [Richard Cook and Brian Morton, The Penguin Guide to Jazz on CD, 6th Ed.]


As Gary Giddins so succinctly put it - “Davis is a commanding presence out of Parker and Adderley.”


And that’s exactly why I like Jesse’s playing in general and in particular on High Standards [Concord Jazz CD 4624].


Ken Franckling offers these interesting perspective on Jesse and performing Jazz in a group context in the 1990s when this recording was made [1994] at the conclusion of which you’ll find a video montage made up of CD cover art and photographs as set to Isms, one of Jesse original compositions featured on the recording.


“Given the economics of jazz in the 1990s, it is difficult for any musician today to hold together a full-time working band. And if you are a young player, that prospect is near-impossible regardless of your name or abilities.


Jazz for the most part has become a freelance performance world. Lineups shift from city to city as players grab whatever opportunities come their way. While that may expose individual players to many varied musical situations over the course of a year, Jesse Davis finds it unsettling.


"The band mentality doesn't seem to be around anymore," laments Davis, one of the most promising journeyman alto saxophonists on the scene today. "The purpose for having a band is to bring together players who could grow together as musicians and grow to a point where they could achieve a distinctive sound."


The concept worked well for many bands in the 1950s and '60s and a lot longer for some, including Art Blakey's Jazz Messengers. It still works for the Modern Jazz Quartet and outfits led by high-profile leaders like Dave Brubeck, Phil Woods and Jackie McLean — but even they don't perform as regularly as they used to. 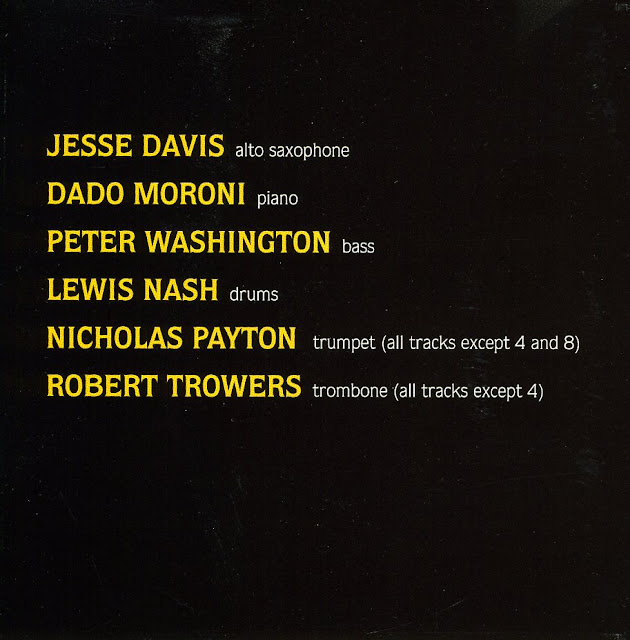 Suffice it to say, Jesse Davis doesn't have a working band of his own despite being blessed with the talents and temperament to lead one. For this recording, his fourth as a leader on Concord Jazz since 1991, Davis did the next best thing.


He brought together the five people he'd like to have in a permanent Jesse Davis band: fellow New Orleans native Nicholas Payton — a stunning young voice on trumpet — Basie Band veteran Bob Trowers on trombone, pianist Dado Moroni — with whom Davis often works in Europe — and two of the best and busiest young rhythm aces in jazz, bassist Peter Washington and drummer Lewis Nash.


Much like Davis, each is a gifted player and knows how to make music that swings mightily. All of them have crossed musical paths frequently in various performance settings. As a result, this recording has the feel of a true working band from start to finish.


Jesse's alto sound is bittersweet yet leans more toward the joyful side of expression. At times, I can hear traces of Jackie McLean and Phil Woods in his playing. But mostly I hear Jesse Davis, a young man whose purposeful sound is always ready to explode with musical passion.


His credentials speak volumes about his talent: Studies with Ellis Marsalis at the New Orleans Center for Creative Arts; a raft of outstanding musicianship awards during and after college; tours with George Wein's Newport All-Stars, the Philip Morris All-Stars and Clark Terry; guest opportunities with Wynton Marsalis at Lincoln Center in New York; and collaborations with pianist Walter Bishop, Jr.

For this recording, Jesse wanted to put a fresh imprint on the traditional values of jazz. The most natural starting point was standards from the American Songbook and jazz repertoire and a handful of spirited originals. …”