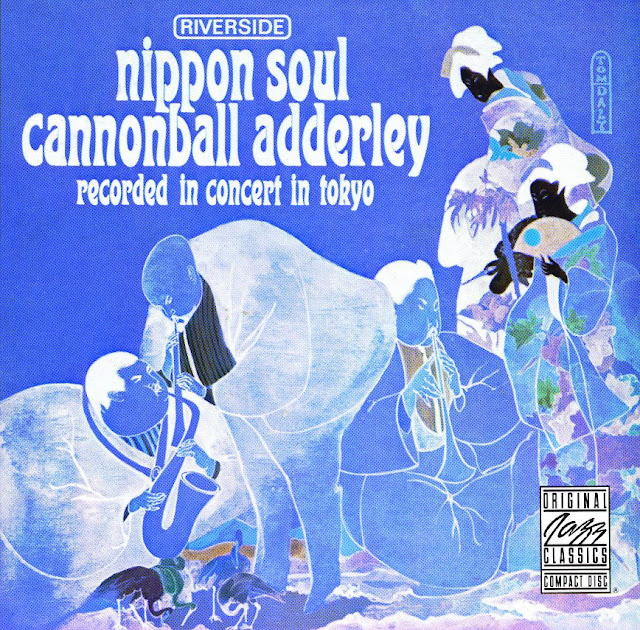 Cannonball Adderley was enormously popular in Japan. That's no surprise; he was enormously popular everywhere. But there is a special quality that Japanese fans bring to adulation of their heroes, an intensity of feeling that many jazz artists have said they often experience as a physical sensation when they perform for Japanese audiences. That intensity can be heard in the audience reaction in this concert recording and felt in the stunning performances by Cannonball, his brother Nat on cornet,Yusef Lateef on flute, oboe and tenor sax, and the driving rhythm section of pianist Joe Zawinul, bassist Sam Jones, and drummer Louis Hayes. In 1963, Adderley was riding high, leading a band that was probably his best and included Lateef, one of his heroes. Cannon was playing with even greater zest than usual. Nippon Soul [RLP-9477/OJCCD--435-2] captures and shares that joy.


Orrin Keepnews, who produced the original Riverside LP remarked in his liner notes that “it would have been quite a waste indeed if this [1963] tour had gone by without being preserved on tape. Fortunately, the occasion was not to be wasted. Through the cooperation of Philips Records of Japan, obviously the possessors of equipment and engineering skills fully up to American standards, Sankei Hall [on July 14-15, 1963] became the scene of what is probably the first recording of American jazz artists in that country.”


I’ve selected the Tengo Tango track from the concert to accompany the video montage as I was quite taken by its bold brevity.


It seems from the following explanation by Orrin, that this compactness was intentional:


“Also featured is the Adderley brothers' Tengo Tango — a most effective and strikingly concise performance in the Jive Samba vein. (This number had been cut before the tour for release as a single record, thereby leading to an interesting and probably unique switch. Almost always, when a formidable "blowing" group like this one produces a short take of a tune to fit the physical limitations of a single, they proceed to use a much more extended version on the job. But in this case they were so taken with the original succinct treatment that it has become the only way the sextet offers this intriguingly rhythmic tune.)”