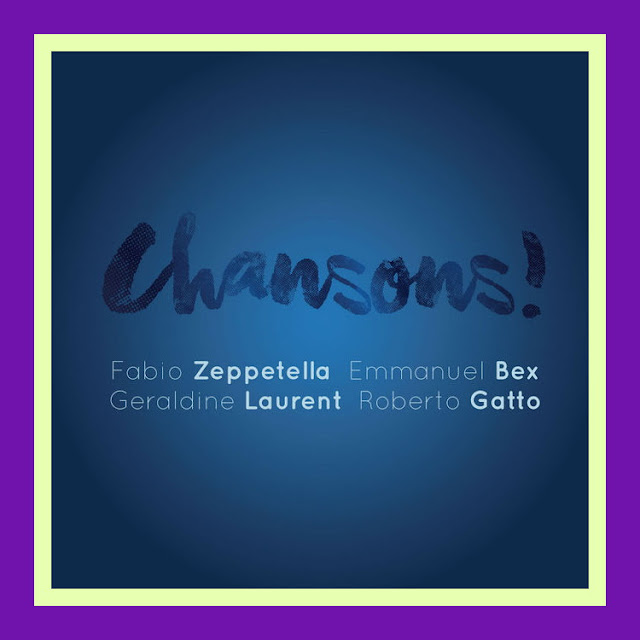 The editorial offices of JazzProfiles has recently received a number of new and forthcoming recordings and we’d like to share some information with you about certain of these that we have found particularly appealing.

The Italian word for songs is “Canzoni” and it seems fitting that it so closely resembles that of the French word for songs - “Chansons!” because of the geographical proximity of Italy and France and because the two countries share a quest for beauty in all aspects of Arts and Letters in the broadest sense of those terms.

This French-Italian cultural and artistic affinity is on display in Chansons! Guitarist Fabio Zeppetella’s latest CD for Via Veneto Jazz and Jando music [VVJ 113] on which he is joined by his countryman Roberto Gatto on drums and two, excellent French Jazz musicians: Emmanuel Bex on organ and voice and Géraldine Laurent alto sax.

There is a further meshing of en Francais and Italiano in the eleven song selections that make up this album as six are by Italian composers while the remaining five feature tunes penned by French songwriters.

The press release that accompanied Chansons! It as “a musical conception similar to a diplomatic treaty or melodious embrace between cousins. Essentially, it’s an innovative exchange between two neighboring worlds that have always eyed and inspired one other with reciprocal curiosity. Italy and France unite as allies on the musical front, gathering on the field four extraordinary talents: Fabio Zeppetella, Roberto Gatto, Géraldine Laurent and Emmanuel Bex.

The group employs a variety of musical devices to keep the music based on these familiar melodies interesting. For example:

This original quartet uniquely interprets eleven songs that best reflect the musical tradition of singer-songwriters belonging to these two countries. Starting from the highly popular jazz composer Bruno Martino, passing through the ever-present De André and De Gregori and arriving to Pino Daniele, another milestone; on the French scene are idols such as Jacques Brel, Leo Ferré, Yves Montand and Joe Dassin.”

The quartet’s interpretation is extraordinary and the songs in “Chansons!” enchant from beginning to end. While the harmonious complicity of Gatto, Bex and Zeppetella is a well-known fact, the musical fluency added by the involvement of Laurent is unexpected, further enriching this innovative project.”

The music on Chansons! [VVJ 113] is Jazz but played in a manner that compliments a basic facet of the music historically: its receptiveness to a variety of influences. In this case, Zeppetella and company infuse Jazz with a variety of French and Italian popular tunes which they alter melodically, harmonically and rhythmically.

For example, on Track one - E la chiamano estate - opens as a slow tempo rhumba with a rock ‘n roll backbeat which is understated because of Roberto Gatto’s uses of brushes to establish this pulse.
Bocca di rosa Gatto plays a 6/8 triplet figure behind Géraldine Laurent’s improvised introduction before she states the melody in unison with Zeppetella which launches a magnificent Bex organ solo.

Fabio switches to acoustic guitar to frame the chords for Buonanotte fiorellino over which Géraldine plays a beautiful one chorus statement of the melody to create the ultimate lullaby.

With its Jazz-Rock fusion beat A me me piace o’ blues hits the ultimate groove that really locks the musicians into some inspired soloing.

This is followed by the startling contrast created by a church-like choir introduction to Napule è which is formed by a Bex voice-over organ effect that creates a sonority underpinning improvised statements by Laurent and Zeppetella.

My favorite is a Latin Jazz version of Luna Rossa which you can check out on the video that closes this review along with an audiofile only version of Bocca di rosa.