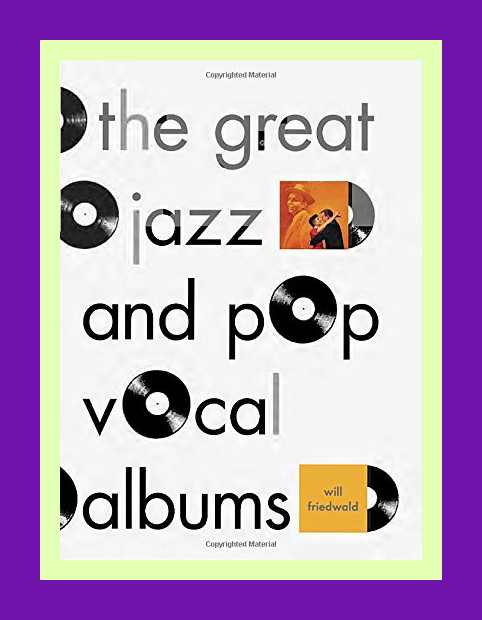 It’s only fitting that one of the earliest reviews of Will Friedwald’s new book in a major publication be written by Ted Gioia as I would venture to say that in combination, these two authors have a working knowledge of vocal and instrumental Jazz that is as comprehensive as it gets.

Blues, loves songs, vocalese, pop, Jazz - whatever the style of, broadly speaking, popular music, Will and Ted are a fountain of information.


Equally as important, they tell a story well as each is a gifted-writer whose prose informs, elucidates and entertains.

The following appeared in the November 17, 2017 edition of The Wall Street Journal.

Review: Defining the Canon of ‘The Great Jazz and Pop Vocal Albums’: A great critic’s chronicle of the postwar love affair between jazz and pop.

“The relationship between jazz and pop culture reminds me of one of those turbulent Hollywood marriages. Sometimes it’s exciting, filled with passionate, public embraces. But just as often, there’s a nasty breakup with only indifference or hostility between the former soul mates.

Over the last few years, the jazz-pop relationship has gotten sexy again. If you doubt it, just gaze at the stars and chart their courses. Hip Hopper Kendrick Lamar has opened up a promising dialogue between rap and jazz. David Bowie hired jazz musicians for his last album, “Blackstar,” and created a genuine masterpiece. Bob Dylan started recording Frank Sinatra songs. And then a host of movies (“Whiplash,” “La La Land,” “Born to Be Blue,” “Miles Ahead,” “Nina”) sealed the deal.

Against all odds, jazz has gone mainstream again. It won’t last long — it never does — but enjoy it while you can. This genre blending is creating some of the most exciting music on the current scene.

A few old-timers, however, remember an earlier marriage between jazz and pop. Now that was real sexy — back when Sinatra songs were sung seductively by Sinatra himself, not a Nobel laureate. This first golden age of pop-flavored jazz started around the same time as the birth of the record album, gained momentum during the course of the 1950s and only gradually fell apart in the 1960s. Many listeners believe this period marks the high point of American popular music.

No critic has done a better job of chronicling this post-World War II love affair between jazz and pop than Will Friedwald. I’ve followed his work with interest since the 1980s, first discovering his writing in the Village Voice and then enjoying his seminal 1990 book “Jazz Singing.” In subsequent years, Mr. Friedwald seemed everywhere in the world of jazz-pop vocals. He collaborated with Tony Bennett on the singer’s autobiography, wrote a definitive book on Sinatra and penned countless essays and liner notes on singers famous and otherwise.

In his new book Mr. Friedwald builds on his unique expertise in defining a canon of 56 classic jazz and pop vocal albums. But this is anything but one of those glib “list” books so popular nowadays. Mr. Friedwald digs in deeply in his analysis—almost every album gets more than 5,000 words of attention. Each track is weighed in the balance. In fact, Mr. Friedwald assesses virtually every arranger’s trick, instrumental solo and vocal inflection in his path.

Much of this music is familiar, even overexposed, but Mr. Friedwald has the ability to surprise us, even shock us with his perspectives. He may have already written thousands of pages on jazz and pop singers, but he still wants to make waves, defy the consensus and topple the conventional wisdom.

Just consider the following. Sinatra gets only two albums included in this guide, but Doris Day earns three slots. The rest of the Rat Pack fares even worse. Dean Martin and Sammy Davis Jr. are left out of the canon entirely, but Barb Jungr and Robert Goulet make the cut. And in the strangest twist of all, Mr. Friedwald devotes a long sympathetic essay to Tiny Tim, a mostly forgotten ukulele-playing novelty act who enjoyed the briefest half-life of fame at the end of the 1960s.

In other words, this book wants to provoke you. Mr. Friedwald is looking for an argument. I suspect that, more than anything, he wants to force you to go back to the music itself, listen carefully, and make up your own mind.

This book certainly had that effect on me. I wasn’t always convinced by the author’s advocacy. I don’t see myself ever joining the Tiny Tim fan club. But in other instances I was glad for Mr. Friedwald’s prodding—for example, forcing me to revisit mostly forgotten albums by Kay Starr and Della Reese.

And I give him a standing ovation when he focuses on some of my favorite unsung singers of the 1950s. Very few music fans under the age of 70 even recognize the names June Christy, Jo Stafford and Lee Wiley. I fear that their remarkable body of work will be forgotten in the not-so-distant future. But Mr. Friedwald gives them the same lavish attention he devotes to Billie Holiday and Ella Fitzgerald.

As these comments make clear, Mr. Friedwald isn’t afraid to serve as advocate for lost causes. I can’t recall a single notable music critic in recent decades championing the work of singers Eydie Gormé and Steve Lawrence, a husband-and-wife team mostly known for appearances on TV variety shows of the 1960s, where they seemed hopelessly old-fashioned during the age of rock ’n’ roll. But Mr. Friedwald pleads eloquently on their behalf, and probably could convince any jury of their merits.

Of course, this author brings an important advantage to this project. By my estimate, he knew personally at least two-thirds of the singers and arrangers mentioned in these pages. And he clearly grilled them for information on recording sessions and songs, pulling out details that would otherwise be lost not only to us but to history.

He wasn’t always successful. Doris Day, still alive at age 95, apparently has little interest in her old records. “Doris refuses to be impressed by anything in her own catalogue,” Mr. Friedwald complains at one juncture, noting that in all of his conversations with her she refuses to see any of her albums as worthy of note. When he interrogated Anita O’Day on details from her ghost-written memoir “High Times, Hard Times” (1981), the singer “gleefully announced that she had never read her own autobiography.” But our indefatigable critic perseveres, defending even those who won’t defend themselves.

Mr. Friedwald includes a lengthy essay at the beginning of his book on the history of the pop vocal album. He offers the best account I’ve read of the business and aesthetic issues behind the rise of this platform for modern music. But he clearly sees the album as a dying format in the age of streaming, and his whole book is colored by a wistful end-of-an-era attitude.

Perhaps that’s the very reason why Mr. Friedwald decided that the time had come for him to share his list of canonic jazz-pop vocal recordings. The party is over, he seems to say, and the best we can do is spin those classic discs one more time. I’m not so pessimistic, and wish he had made more space in these pages for the current crop of singers. He does give an in-depth appraisal of Cassandra Wilson’s work, but there’s plenty of other music happening that measures up to the best from the Cold War years. Check out Cécile McLorin Salvant’s new album, “Dreams and Daggers,” or the impressive body of recordings by (for starters) Kurt Elling, Gregory Porter, Diana Krall and Ian Shaw.

But if I am more optimistic than Mr. Friedwald about the fate of the jazz-pop album, I do fear the disappearance of the kind of insightful long-form music criticism featured in this book. You rarely encounter thoughtful 5,000-word assessments of albums anywhere nowadays. They may not be extinct, but they do belong on the endangered journalism list. Great musicians and brilliant albums aren’t going away, but loving appraisals as judicious as Mr. Friedwald’s are sadly in short supply.

—Mr. Gioia writes on music, literature and popular culture. His latest book is “How to Listen to Jazz.”

Email ThisBlogThis!Share to TwitterShare to FacebookShare to Pinterest
Labels: Ted Gioia, will friedwald