The following anecdote is drawn from Milt’s collection of stories and photographs as contained in Playing the Changes, which also contains a CD of Milt telling stories and playing music.


David G. Berger and Holly Maxson assisted with this wonderful collection of Milt Hinton’s life in stories and in photographs.


Published by the Vanderbilt University Press, it’s a compendium that leaves a wonderful series of memories of a life well-lived.


“I'm convinced I got a lot of studio work because many producers and arrangers recognized that the rhythm section was the backbone of the music being done at the time. They also came to understand that there was a small group of rhythm section players who could easily adapt to different artists and really complement a performance. Eventually. Hank Tones, Barry Galbraith. Osie Johnson, and I got identified as part of the select group. And for a couple of years we worked together almost every day. We even got to be known as the New York rhythm section. It wasn't an official title, just an informal name people in the business gave us. And, of course, it wasn't an exclusive thing either. We all worked in plenty of other rhythm sections too.

Hank was always in demand because he's an unbelievable piano player. Back in those days he'd done a lot of records with Ella, and that seemed to make him even more popular, especially with female vocalists. 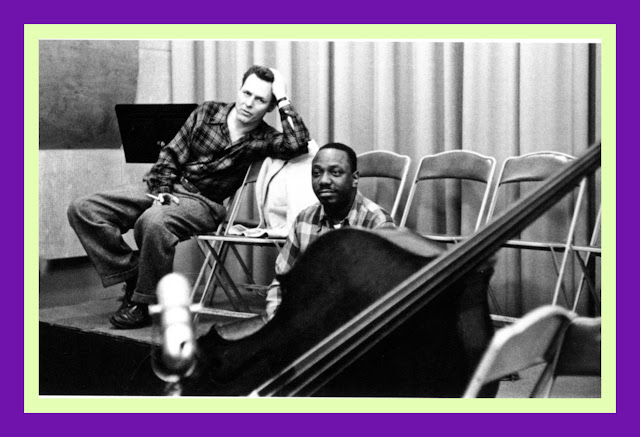 I guess they figured if Ella sounded so beautiful, how could they go wrong using her accompanist.Hank's a good-looking, dark-complected guy who's always seemed to be concerned about his appearance. In all the years I've known him. I only saw him without a coat and tie once. That was when a couple of us played a party at Shoobe's house and it was so hot. Shoobe ordered him to take off his jacket.


Barry had been with Claude Thornhill's band. He was a very knowledgeable musician who was a great reader and could also write very well. He was a warm, small town-type guy — average height and weight, short hair, rugged but good-looking. He dressed like a woodsman. No matter how cold it got. he'd never wear an overcoat, just a plaid shirt with an open collar. He had a great sense of humor, but like a lot of guys who smoke too much, his laugh always turned into a cough.


Osie was a burly, dark-complected man. He was very outgoing, affable, and had one of the most resonant voices I've ever heard. In fact, I was there when a funny incident involving his voice helped get him started in the studios.


Osie had come into New York with Earl Hines's hand and run into Jo Jones, who invited him to a record session. I guess Jo wanted him to see how things worked and meet some of the studio regulars. We were doing a small date for a singing group called the Billy Williams Quartet. In those days they had a regular spot on one of the weekly TV shows and also a couple of good-selling records.


I don't remember what tune we were running down, but I can still see Osie sitting up on a high stool next to Jo with a big grin across his face, watching and listening to everything. After a while, we started to record, but before we could finish the tune, the guys in the booth cut us off. We tried another take, but the same thing happened. Finally, after seven or eight more attempts, we made it through to the end. But while the last note was resonating, and the recorders were still rolling. Osie boomed out, "Oh, yeah."


Everyone in the room aimed toward him and for a second or two there was dead silence. Then someone said to Osie. "Man, in here you don't move 'til the red light goes out and the—"


But Billy Williams interrupted, "That's great, leave it in." About a minute later, the playback started and when everyone heard Osie at the end. they flipped. In fact, they liked it so much they gave him a withholding slip and paid him for the date.


It didn't take long before people learned about Osie's true talents. He was a great drummer who could also arrange, sing, and play just about any kind of music. As it turned out, Jo Jones eventually lost studio work to Osie, who was a superb reader and didn't have as many personal quirks.


The four of us worked well together in all kinds of situations, and this had as much to do with our personalities as our musical talents. None of us was arrogant. In fact, we were exactly the opposite, congenial and accommodating. Whenever we walked on a date we were really concerned about the featured artist. We wanted that person to he satisfied and we'd go to great lengths to accomplish it. If the music wasn't good and needed something extra, we'd fix it. right on the spot.


It even got to the point where some arrangers would hand us chords for a tune and expect immediate results. They'd say something like. "Your part is loose, have fun with it," which meant we should do a quick head arrangement without holding up the session. Sometimes our contributions really helped make a hit. For example, the four of us did Bobby Darin's record of "Mack the Knife." Osie or Hank had the idea of going up half steps, and as far as I'm concerned, that's what made this version a smash.


Of course, we never got arrangement credits on anything we did. Back in those days, it was rare for sidemen to get credits on an album, especially in the pop music field. But we got our forty-one dollars a session. And the fact that we knew how much we'd contributed seemed to give us enough satisfaction."