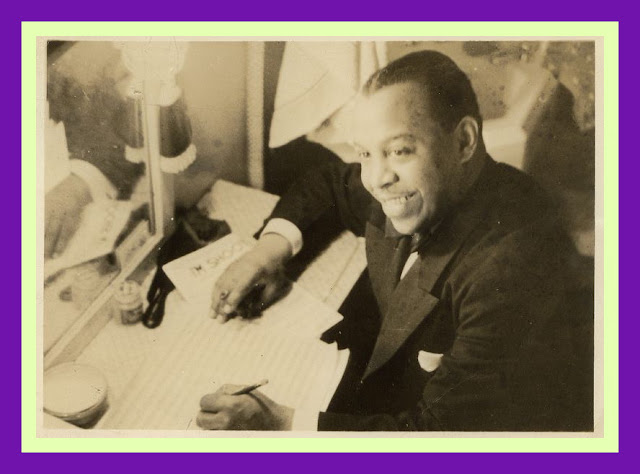 “Redman was an outstanding jazz arranger and the first master of jazz orchestration; several of his innovations have since become standard features of jazz arranging.”
- Robert Kenselaar from Barry Kernfeld, editor, The New Grove Dictionary of Jazz.

Have you ever wondered about the dynamics of a big band?

How does it work?

A bunch of musicians with assorted brass, reed and percussion instruments assemble on a stage, organize themselves in various sections seated behind bandstands, a conductor or some band member snaps their fingers to set a tempo and a wall of sound erupts.

Where did the Jazz big band paradigm come from?

Early Jazz bands were made up of single instrumentation: a trumpet; a trombone; a clarinet or perhaps a saxophone.

Jazz bands that featured multiples of these instruments usually featured them playing a melody in combination - kind of like a marching band set to dance rhythms.

Written arrangements which served to introduce musical sounds that interlaced melody with harmony and apportioned these sounds into Jazz bands made up of brass sections, reed sections and rhythm sections began to make their presence felt in the 1920.

One of the first to do this was the Fletcher Henderson Orchestra in the 1920’s.  Henderson’s greatest claim to fame would come as the arranger for many of the early Swing era classic songs associated with the Benny Goodman Orchestra in the mid-1930’s.

But Henderson was not the arranger who first brought his own orchestra to prominence in the 1920s. That distinction goes to Don Redman.

As  explained by James T. Maher and Jeffrey Sultanof in Bill Kirchner, ed. The Oxford Companion to Jazz

“Henderson's band during the 1920s was a veritable all-star unit; at one time or another, trumpeters Armstrong and Rex Stewart, trombonist Jimmy Harrison, and reedmen Don Redman, Coleman Hawkins, Benny Carter, and Buster Bailey were members. It became a house band at Roseland, and Henderson was cited in Variety as the "Ivy League prom king."

Redman was Henderson's first important arranger, and such recordings as "Copenhagen," "Shanghai Shuffle," "TNT," and "Henderson Stomp" (all Columbia) show off his vision of jazz orchestra styling: an interplay of brass and reeds, often in a call-and-response manner.

He also further developed the idea of backgrounds behind soloists, either chordal or riff-based lines that were jazz-oriented in contrast to Ferde Grofé "harmony chorus" figures [soft harmonic reed voicings under a solo saxophone or trumpet melody line].”

The editorial staff at JazzProfiles wanted to remember Don Redman on these pages with the following overview of his career by Robert Kenselaar from Barry Kernfeld, editor, The New Grove Dictionary of Jazz.

He was a child prodigy from a musical family, and learned to play most conventional instruments. By the end of his years in high school he had already begun writing arrangements. At the age of 20 he graduated from Storer College in Harper's Ferry, West Virginia, with a degree in music.

After working professionally for about a year in Piedmont he joined Billy Paige's Broadway Syncopators, a band based in Pittsburgh. Here he played clarinet and saxophones, and also wrote some arrangements. While on tour with Paige's band Redman met FLETCHER HENDERSON in New York, and joined him in several recording sessions. When Henderson formed an orchestra shortly afterwards Redman was one of the members; besides writing the band's arrangements he played clarinet, saxophones, and occasionally other instruments.

The addition of Louis Armstrong in 1924—5 as jazz specialist had a deep impact on all the players and also on Redman's arrangements; the band turned increasingly from dance music to jazz, and by the mid-1920s it was the most prominent black jazz orchestra in the country.

Redman left Henderson in 1927 to become music director of MCKINNEY'S COTTON PICKERS, and in a few months he transformed this group from a little-known novelty ensemble into one of the major jazz orchestras of the period. The Cotton Pickers focused less attention on its soloists than Henderson's band had done and concentrated more on Redman's arrangements, which were played with precision and control.

Redman's writing became more elaborate, especially in harmony and rhythm; his new sophistication is apparent in his outstanding arrangement of Rocky Road. Besides playing as a soloist (principally on alto saxophone) and in the reed section, Redman began to appear as a singer, performing in a high pitched, half-spoken style. He also composed his best-known popular songs with the Cotton Pickers: Cherry and Gee, ain't I good to you?.

In October 1931 Redman formed his own band with Benny Morton, Harlan Lattimore, and others. In that year he composed Chant of the Weed, perhaps his most masterly work. Although the success of his band waned in later years, it broadcast regularly on radio and made numerous recordings for Brunswick, Victor, and other labels before breaking up in 1940.

Redman spent most of the 1940s composing and writing arrangements for radio, television, and many big bands, including those of Count Basie and Jimmy Dorsey. He organized a big band to tour Europe shortly after World War II, and in 1951 became music director for Pearl Bailey, an association which lasted throughout the 1950s. At the end of the decade he once again issued a few jazz recordings. He seldom performed during his final years, but spent his time writing several extended works (which have never been performed in public).

Redman was an outstanding jazz arranger and the first master of jazz orchestration; several of his innovations have since become standard features of jazz arranging. His influence was at its greatest during his early years as chief arranger for Henderson. His early arrangements integrated solo improvisations with passages for ensemble in the style of improvised jazz, and he also incorporated certain aspects of collectively improvised jazz, such as breaks, chases, and call-and-response patterns, into his scores. His versions of Copenhagen, Sugar Foot Stomp, Go 'long mule, and Shanghai Shuffle for Henderson are important landmarks in the evolution of ensemble jazz.”

You can checkout Don Redman’s arrangement of Shanghai Shuffle for the Fletcher Henderson Orchestra on the following video. Redman can be heard on oboe and Louis Armstrong takes the muted trumpet solo.