You Stepped Out A Dream/Chick’s Tune 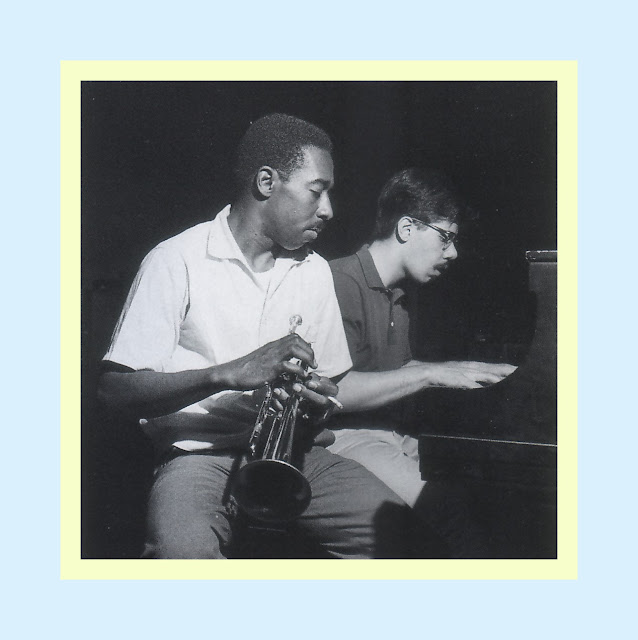 "You Stepped Out of a Dream Composed by Nacio Herb Brown, with lyrics by Gus Kahn

"During the early 19405, "You Stepped Out of a Dream" was best known as a theme song for actress Lana Turner, the leading Hollywood femme fatale of the period. The song had received prominent placement in the 1941 film Ziegfeld Girl, where Turner neither sings nor dances to the number, but merely promenades down a staircase in an extravagant costume amid a bevy of similarly clad chorus girls, while Tony Martin handles the vocal duties. Turner would never record the song, but the connection stuck—no doubt because she fit many guys' idea of precisely what they would like to see stepping out of their dreams.

Kay Kyser enjoyed a modest hit with the song at the time of its initial release, and recordings by Glenn Miller (featuring Ray Eberle and the Modernaires) and Guy Lombardo were also popular. These renditions came with little jazz content, but the song captured the attention of musicians, no doubt due to the unusual chord progression, which captures an appealingly exotic flavor while still serving as a suitable framework for improvisation. As early as 1941, George Shearing recorded "You Stepped Out of a Dream" in London, and American ex-pat Teddy Weatherford did the same in Calcutta.

Yet this song didn't become a widely played standard until the 1950s. Recordings by Dave Brubeck and Stan Getz from 1950 helped demonstrate the jazz potential of the piece, while later crossover efforts by Nat King Cole and the Four Freshmen kept the song in the consciousness of the general public. Sonny Rollins's combo performance from 1957 stands out as one of his best efforts of the period, and must have inspired a number of other saxophonists to add the song to their set lists; over the next several years, many of the leading tenorists of the day—including Dexter Gordon, Eddie "Lockjaw" Davis, Warne Marsh, Teddy Edwards, Brew Moore, and Archie Shepp—were captured on tape performing it.

"You Stepped Out of a Dream" has retained its place in the repertoire, although I note that, in more recent years, it has been more popular with singers than horn players. The melody, which stays within an octave range (albeit a widely used fake book lead sheet shows the tune ending on a high E that you will rarely hear in actual performance), makes few demands on vocalists with its long-held notes and few wide interval leaps. The lyrics are a bit of a sentimental mish-mash—praising the lips, the eyes, the smile, etc.—but built on the same cliches that always seem to find a ready audience. A few pop-oriented crooners (Peter Cincotti, Art Garfunkel) have tackled the number. Even so, I can hardly imagine a song of this complexity ever returning to the charts."
- Ted Gioia, The Jazz Standards: A Guide to the Repertoire

According to the musicologist K.J. McElrath, the song, You Stepped Out of A Dream, which was written by Nacio Herb Brown and Gus Kahn for the 1941 film, Ziegfeld Girl, … “has one of the most exotic and wandering harmonic progressions in the repertoire.  Although starting and ending on C major, this piece takes unusual twists and turns that seem to deliberately avoid settling on any one key for any length of time.”

Mr. McElrath goes on to say that “the movement within the tune is characterized by long, sustained tones and slow, harmonic rhythm. The melodic line gradually rises a third by step and then leaps up a sixth. The descent is by leaps.”

Maybe all of these unusual “twists and turns” is what makes the tune attractive to Jazz musicians, especially tenor saxophonists like Stan Getz, Dexter Gordon, Sonny Rollins, Teddy Edwards, Warne Marsh and Brew Moore, all of whom recorded notable versions of it.

Jazz musicians often look for unusual tunes with interesting structures and chords so that they can alter the melody while retaining the song’s unique qualities as the basis for improvisation.

Such was the case when the young pianist, Chick Corea, encountered You Stepped Out of A Dream and superimposed a different melody while renaming it Chick Tune for its debut on trumpeter Blue Mitchell’s debut album for Blue Note entitled – The Thing To Do [BST-84178]

“Mitchell's first Blue Note release concluded with Corea's first recorded composition, a very creative take on the YOU STEPPED OUT OF A DREAM chord sequence with the decid­edly less imaginative title chick's . After [drummer Al] Foster's introduction, the complex theme is developed with a variety of supporting rhythmic feelings, including Latin, cut-time and stop-time.

The composer goes first here, buoyed by a ferocious [bassist Gene]Taylor - Foster groove. Corea sprinkles some [Horace] Silver-isms around his second chorus and sounds as if he was prepared to give way after chorus three before quickly extending his improvisation with a fourth chorus that alludes to another of his favorite pianists, Thelonious Monk.

[Tenor saxophonist Junior] Cook plays with great invention and continuity, reminding us that he relished a good set of chord changes and knew how to navigate his way through them while also sustaining a rhythmic dialogue with the drums.

Mitchell is more about singing and sound, though he, too, has a great hookup with Foster. Two choruses of eight-bar exchanges between the horns and the drummer help bring the track and the album to a rousing finale.”