In Appreciation Of George Shearing by Simon Pilbrow 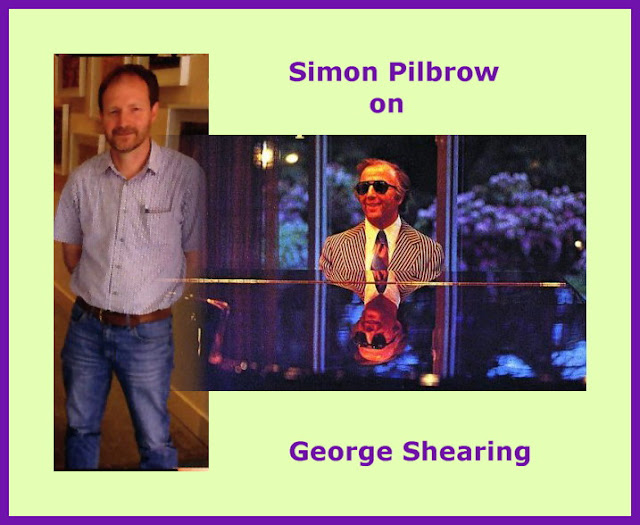 Frequent visitors to the pages might recall a posting earlier this year [2018] about a compact disc entitled Colours of Sound - by Simon Pilbrow with the Brent Fischer Orchestra [Clavo Records CR 201709].


I met Simon, who is also a physician and lives with his family in Australia, for the first time at a Los Angeles Jazz Institute event and subsequently stayed in contact with him via the internet


Talk about first impressions. Not only was he a fan of the styles of Jazz that I favor but Simon was also a musician; a first rate pianist and now, thanks to a sampling of his writing ability on the new CD, a composer, too, of some distinction.


Another of Simon’s gifts is his ability to write very descriptive narratives, some of which take very complex things and break them down into pieces that are easier to understand.


Accomplished Jazz musicians have the ability to make playing the music seem effortless. As a result, sometimes we, the listening audience, form the impression that this stuff comes fully formed such that its as easy to make as pouring it out of a bottle.


Reading Simon’s essay on George Shearing and his music will more than dispel that notion, while at the same time, provide you with an understanding of the immense complexities involved in continuously making the music at such a high level of performance.


In Appreciation Of George Shearing and his Piano Block Chords


“George Shearing was an incredible musician, with very comprehensive jazz and classical chops. He was a genius and his contribution to jazz has been major. What we probably all agree on is that what he achieved musically with his block chord architecture would have to be his most individual and enduring contribution, and its influence on every jazz pianist since and many others. For what it is worth, I thought I would add some background on this – as a piano player who has long admired Shearing’s music. Dates are approximate – there may be inaccuracies.


Shearing’s block chords were based on a closed octave – five notes, top and bottom doubled, an octave apart. The same structure was employed from the late 1930’s by Glenn Miller, in his arranging for his reed section, the unique sound achieved with clarinet in the top voice. Later saxophone sections exploited similar structures. [As an aside, using just four voices - no doubling however, I would argue that a reed section often achieved a lighter sound - many examples e.g. the Four Brothers sound and the Art Pepper+Eleven recording with the harmonized Parker solo on Groovin’ High - which included Med Flory - achieve a lighter sound than Flory’s later arrangements for the incredibly brilliant Supersax, where baritone doubled first alto).  Going back way before this, I hear similar structures in Puccini’s operas, with his trademark vocal doubling the first violins, the strings playing what sound to be closed-octave, five-part harmonies like Shearing. I have not consulted the scores to verify this - only my ears. However, the most direct source or origin of the Shearing sound that I have ever found, quite accidentally, is in Johnny Green’s original published sheet music for “I Cover the Waterfront” (c 1933), where he spells out Shearing-type block chord passages for a bar at a time in places, four notes in right hand, melody doubled in the left hand, exactly as most later jazz pianists would play them. I don’t know if young George had access to this music - obviously he could not have read the music, being blind from birth – but it seems to be more than a coincidence. Many ordinary folk, who bought the sheet music to play it in their own living rooms, would likely have practiced and played these voicings as Johnny Green written. Attractive though they are, it seems that they were not exploited by others in the front line of jazz for some time.


Milt Buckner began playing his locked-hands voicings in the late 1930s, and Shearing apparently heard these and was influenced by them – but these employed four note voicings in the right hand, and the same four notes an octave lower in the left hand – so eighth notes. This was pretty technically demanding, could get muddy. Years later Oscar Peterson would conquer this. With regard to the less dense, five-note, Shearing-type voicings, one can hear Billy Strayhorn, when sometimes in the Ellington piano chair, occasionally playing similar 5-note voicings around 1940-41, Ellington himself in places in the early 1940s. Nat King Cole was using them a little in the mid 1940s, as more conspicuously was Lennie Tristano on recordings around 1945-1946. George Shearing burst on the US Scene in 1947, playing his voicings extensively, and with obvious superior technical facility than anyone. Erroll Garner used these voicings in the late 1940s,l perhaps influenced by Cole or Shearing (“Pastel” is a great ballad example, with some nice chromaticism; “Play Piano Play” is a bouncier swinging example) but his many other trademarks were always more prominent.


So, why are Shearing and his block chords so significant to the history of jazz piano? The following are my reasons:

It is interesting that each pianist who has used similar voicings extensively, particularly within the fifties and sixties, found quite unique ways to do it that is quite identifiable – and a product of different rhythmic , harmonic and articular approaches and sensibilities presumably


I reckon George Shearing earned his place in the jazz piano pantheon.”