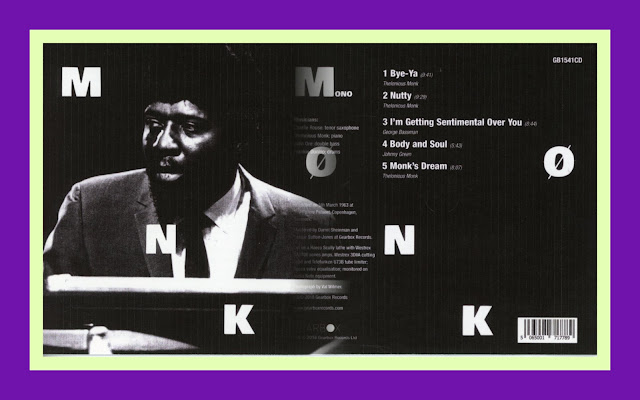 It’s always an event when’s there more newly discovered recorded music by Thelonious Monk to enjoy, whatever the period and whatever the context.


The composer of 70 tunes, many of which have become Jazz standards, when performing in night clubs and concerts, Monk was constantly reworking his repertoire and to some extent, even recomposing it.


And, of course, there’s also what the other members of the band brought to the music: Johnny Griffin, John Coltrane and Charlie Rouse [1924-1988], his long-time associate, on tenor saxophone and the bassists and drummers who made up his various rhythm sections over the years.


Unfortunately, the sound quality of potential reissues is often a challenge, but thankfully,  the sound recreation techniques available today are often a remedy for audio distortion problems.


Thankfully, too, the quality of the audio on Monk in Copenhagen [Gearbox GB 1541 CD], a reissue ot the most recent discovery of one of Monk’s “live” performances, is first rate as is the playing of Charlie Rouse on tenor, John Ore [1933-2014] on bass and Frankie Dunlop 1928-2014] on drums.


Here’s more about this wonderful addition to the Monk discography from James Hale in an article that appears in the December 2018 edition of Downbeat.


“If the 1990s represented the golden age of the CD box set, we might be amid the Age of Found Sound. "Lost" recordings by John Coltrane have made a huge splash, and last year, jazz sleuth Zev Feldman unearthed a 1960 soundtrack by Thelonious Monk,


Now, Monk again is in the spotlight, thanks to the discovery of a March 5, 1963 Danish concert featuring the pianist alongside saxophonist Charlie Rouse, bassist John Ore and drummer Frankie Dunlop. Released by London-based Gearbox Records on a number of media formats — including a deluxe, limited-edition LP — Monk captures the pianist's long-running quartet amid a triumphant European tour.

"That tour was a great success for Monk," said Robin Kelley, the Gary B. Nash Professor of American History at UCLA and author of 2009's Thelonious Monk: The Life And Times Of An American Original (Free Press)- "In 1962, he hadn't done that much, but suddenly things were happening for him. Personally, he was in a great place, and in terms of his career, he was a rising star."


Kelley pointed to the pianist's new contract with Columbia Records, the stability of his quartet and his pending cover story in Time magazine as signs that Monk never had found himself in a better situation.


"He was recording a lot, the band had been together for two years, and this return to Europe gave him the opportunity to really showcase his music," Kelley said. "The tour was pretty well documented, but this Copenhagen gig [at the 210-seat Odd Fellow Palwet] has never surfaced before."


The recording's journey to the consumer market is the stuff of audiophile's fantasy, and it began with the decision by a Danish producer to purchase almost 90 reels of tape about 20 years ago.


"He was going to use them for samples," said Gearbox's Darrel Sheinman. who helped master the recording. "He never got around to it, and he was going to give them to the Danish National Jazz Archive. I knew him through buying some rare jazz records in Copenhagen, so I bought the tapes from him about five years ago."


Sheinman said he began making his way through the tapes, discovering that most of them were "cracking titles procured by the Danish Debut label, which was Charles Mingus' franchise label," run by another Dane.
"It took us an age to review them all," he said. "Since they were mostly broadcast tapes, they were either quarter-track or halftrack recordings, made at either 3.75 or 7.5 inches per second. To save money, broadcasters often used both sides of the tapes."


Despite its age and provenance. Sheinman said the Monk recording was in great shape — probably the best of his purchase, making restoration remarkably easy.


"We simply did some high-frequency riding on EQ to deal with dropouts, but that was it.  We were very lucky with this tape; it was recorded onto quarter-inch tape at 15 inches per second, then straight to all the formats, from vinyl to CD and digital."


Gearbox prides itself on using a completely analog signal chain to create its products, even when the final format is digital.


"We feel analog sound has a bigger soundstage and some gentle, natural compression, while keeping good dynamic range," Sheinman said. "It often depends on the equipment used. We like Studer machines, and their tube ones, in particular, are astonishing."


Sheinman admits that staying true to the analog commitment and refusing to go down the road of full digital restoration is always a challenge.


What Monk showcases is a particularly raucous concert, with the pianist and his bandmates digging deep into their standard repertoire, including "Bye-Ya," "Nutty," "Body And Soul" and "Monk's Dream."


Kelley said that while this was standard fare for the quartet, the music continued to yield new secrets.


"Monk was a composer," Kelley said, "and he tried to make these songs perfect. He played this music in so many different ways. Take "Body And Soul" as an example. He played it over and over, and it reveals him as this master piano player who has this deep knowledge of structure. He could turn it around so many different ways, yet keep returning to that melody."”