Miles Davis - 'Round About Midnight Revisited 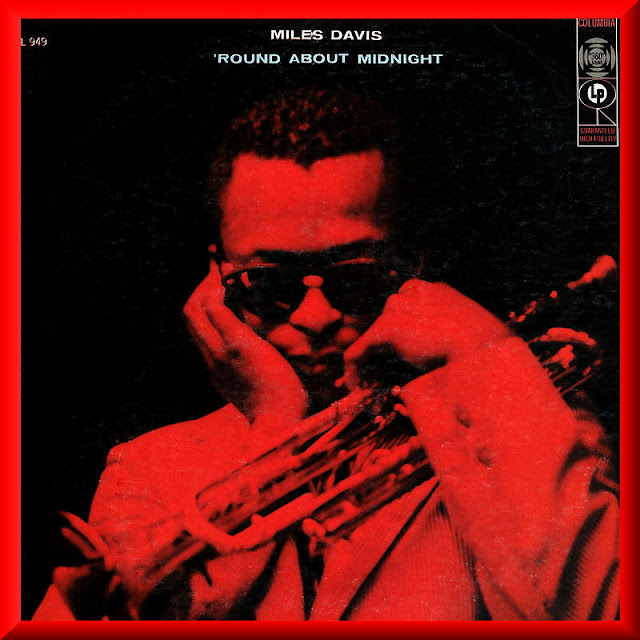 One of the things I enjoy about periodically pouring over the Jazz Literature is spotting fresh ideas that often send me back to re-listen to some of my favorite recordings.

The “tempo change” that Gary and Scott describe in the Gil Evans arrangement for Miles of Monk’s ‘Round Midnight still knocks me out 60 years later!! [I always thought that Philly Joe Jones’ press roll was the equal of that of Art Blakey.]

“In the summer of 1955, Davis made a brief but much-acclaimed appearance at the Newport (Rhode Island) Jazz Festival, creating a stir with his version of Monk's "'Round Midnight." It was the first time most critics and fans had ever seen a Harmon mute. On the basis of this performance, Davis signed a contract with Columbia Records — a major career leap beyond independent jazz labels like Prestige that he had doggedly pursued. Davis, however, still owed Prestige three years under his existing contract, which he fulfilled by recording five albums of music at two marathon sessions. The proliferation of Davis albums in the late 1950s from both labels (the Prestiges were memorably titled with descriptive gerunds: Relaxin', Steamin’, Cookin’, Workin’] boosted his celebrity.

For the cover of his debut Columbia album, 'Round About Midnight (1955), Davis was photographed through a red lens, wearing dark glasses, embracing his trumpet, unsmiling — an iconic image. That album also introduced his first great quintet, one of the most admired small bands in history, with tenor saxophonist John Coltrane, pianist Red Garland, bassist Paul Chambers, and drummer Philly Joe Jones. Miles's old friend Gil Evans crafted the arrangement of 'Round Midnight, adding a tempo change and making the quintet sound fuller than on the other selections. Davis revealed an unmistakably kinetic edginess on this album, even when revisiting his past, as in a ferocious version of Charlie Parker's contrapuntal Ah-Leu-Cha, which he had recorded with Parker in 1948.

Three aspects of this quintet were particularly noticeable. The contrast between Davis's sparing, poignant solos and Coltrane's more demonstrative virtuosity reversed a similar disparity between Parker and Davis, this time favoring Davis; the rhythm section boasted an assertive independence, thanks to Jones's insistent attack and Chambers's authoritative pulse and harmonic skill; and the diverse repertory combined original pieces with pop songs dating back to the 1920s or borrowed from current or recent Broadway shows. Garland, a living thesaurus of pop music, suggested many of the tunes that Davis recharged. In this regard, Davis was also influenced by Frank Sinatra, who was revitalizing his own career at the same time, often with old songs that were considered too dated or corny for modern jazz. By adapting such unlikely songs as Bye Bye Blackbird (from a 1926 revue), Diane (from the 1927 silent movie Seventh Heaven], The Surrey with the Fringe on Top (from the 1943 show Oklahoma!), and If I Were a Bell (from the 1950 show Guys and Dolls], Davis opened up jazz repertory and affirmed the old saw Taint What You Do."

Email ThisBlogThis!Share to TwitterShare to FacebookShare to Pinterest
Labels: 'Round About Midnight, 'Round Midnight, miles davis