The Saxophone and Jazz 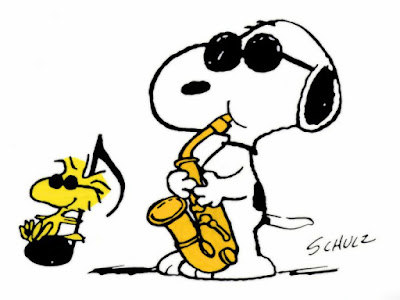 Written from the standpoint of the early 1980’s and published in one of the earliest editions of Gene Lees Jazzletter, Mike Zwerin’s concluding statement evolved over the next 30 years with the likes of saxophonists such as Michael Brecker, David Sanborn, and Bob Berg, continuing the liaison between Jazz and other forms of popular music.

Along with drums, electric guitar, bass and keyboards, the saxophone remains an instrument of choice for many 21st century musicians, as well.

“After Adolphe Sax patented his saxophone in 1846, Berlioz wrote: "Its principal merit is the beautiful variety of its accent; deep and calm, passionate, dreamy, melancholic, like an echo of an echo... To my knowledge, no existing musical instrument possesses that curious sonority perched on the limit of silence."

In his autobiography, Father of the Blues, W.C. Handy — who claimed to have been the first to use a saxophone in an American orchestra, in 1909 — describes the instrument as "moaning like a sinner on revival day." For Arnold Bennett, the saxophone was "the embodiment of the spirit of beer."

An exhibition on Sax and the saxophone, presented two years ago at the Centre Culturel de la Communaute Francaise de Belgique, offered a fascinating collection of documents, vintage instruments and audio-visual illustrations about the inventor and his invention. The displays included Sax's other inventions: families of brass instruments called saxhorns, saxotrombas and saxtubas; that enormous organ powered and pushed by a steam locomotive for public events; a design for an egg-shaped concert hall; an air purifier for sufferers of respiratory diseases — forty-six patents in all. But he is of course principally remembered for the saxophone family, which in range, homogeneity, speed and subtlety, became the wind instrument equivalent of the violin family, and the musical voice of the Twentieth century.

His first patent was for a bass clarinet, redesigned to give it more flexibility and power. He demonstrated his first saxophone in 1840, behind a curtain because it was not yet patented. It caught the attention of the government of King Louis-Philippe of France, which ordered its military officials to equip their bands with Sax's new instruments. There were articles in the newspapers, pro and con. His competitors used their influence and filed lawsuits against him. A battle of the bands — one conducted by Sax, the other using traditional instruments — on the Champ de Mars in Paris resulted in a jury prize for Sax. The press was almost unanimously favorable. He won large contracts.

Sax moved to Paris. The revolution of 1848 installed a republic and ended the monarchy, including its support of Sax, who filed for bankruptcy in 1852. But the Second Empire followed shortly and in 1854 Napoleon III granted Sax a subsidy. As political fortunes changed, he went bankrupt again, continuing his manufacturing business on a smaller scale. By the time of his death in 1894, he was in reduced circumstances and few people would have bet on the future of the saxophone.

The saxophone was never seriously integrated into classical music, aside from isolated works of Berlioz, Stravinsky, Milhaud and some others. Then came jazz. At the beginning, the dominant jazz instruments were trumpets and cornets. Buddy Bolden, King Oliver, Freddie Keppard and Louis Armstrong were kings.

After that the saxophone began to move in. In 1918, a clarinet player named Sidney Bechet was seduced by a soprano saxophone in a London shop window. In his autobiography, Treat It Gentle, Bechet comments, "This was a piece of good luck for me because i wasn't long after this before people started saying they didn't want clarinets in their bands no more."

The saxophone began to be described as "throbbing" or "wailing" as soloists such as Bechet, Adrian Rollini and Johnny Hodges rediscovered it in the '20s. Its melodic capabilities were explored by Ben Webster, Coleman Hawkins, and Lester Young in the '30s. Saxophone sections were the real stars of the dance bands. Charlie Parker played the instrument harder and faster in the '40s. Lee Konitz and Paul Desmond cooled it out in the '50s. Serge Chaloff, Gerry Mulligan and Pepper Adams picked up from Ellingtonian Harry Carney and explored the underexposed baritone sax. Steve Lacy rediscovered the soprano, which had been neglected since Bechet.

With rock and roll, the instrument went into eclipse along with jazz itself. The electric guitar took over. But to approach the subtlety and variety of saxophones, guitarists had to employ auxiliary equipment such as wah-wah pedals, phasers and flangers. The synthesizer, the first important new instrument invented since the saxophone, served cold 1970’s technopop well, but people need warmth too and the saxophone combines human breath with the speed of a guitar or a keyboard.

In the mid-1970’s Andy McKay with Roxy Music and David Payne with Ian Drury introduced the saxophone to rock. Saxophones became integral to young groups such as the Q-Tips and Dexy's Midnight Runners. Clarence demons' tenor is essential to the power of Bruce Springsteen's material. Phil Woods' alto has been featured prominently on Billy Joel's hits. Steely Dan would not be quite what it is without Wayne Shorter's tenor.

Email ThisBlogThis!Share to TwitterShare to FacebookShare to Pinterest
Labels: saxophone