The Gene Harris Trio Plus One [Stanley Turrentine] 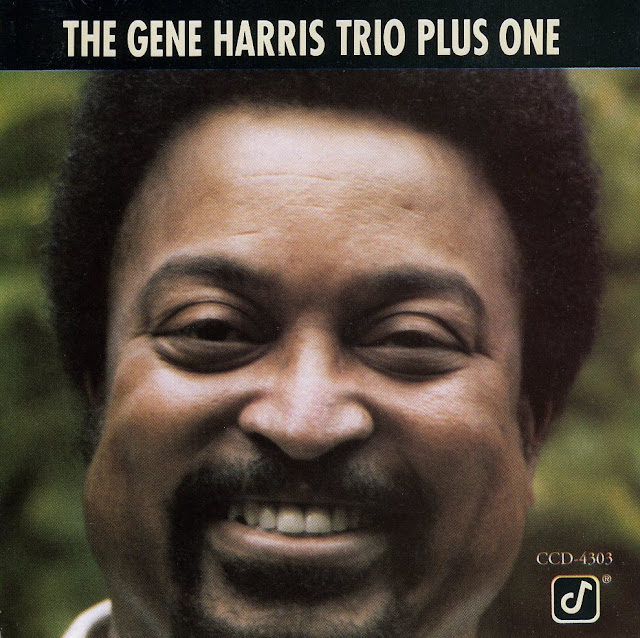 Unlike the grooves in an LP, thank goodness that it is impossible to wear out a compact disc because if that were the case I would have worn this one out a long time ago. It's been among my favorite recordings for many years and now, thanks to the wonder of YouTube, I've been able to append the audio files to the conclusion of this feature so you can listen to it in its entirety.

As was the case with his efforts in not allowing pianist Phineas Newborn, Jr. to pass into relative obscurity, we also have Ray Brown to thank for talking Gene Harris, who had settled in Idaho in the 1970s, out of a premature retirement in 1982.Ray had a long association with pianist Oscar Peterson in the decade of the 1950s, Gene Harris also had a similar, lengthy musical involvement during this same period as the pianist in the Three Sounds with Andrew Simpkins on bass and Bill Dowdy on drums. With its heavy emphasis on a gospel-influenced, blues sound, the group specialized in what some have referred to a “soul-jazz” and was well-documented through its many records on the Blue Note label.

Here's how Ed Berger recounts the story in his insert notes to The Gene Harris Trio Plus One [Concord CCD-4303] which has long been one of my favorite recordings and which often finds its way to the number 1 slot on my CD changer.

“The reemergence of pianist Gene Harris on the jazz scene is one of the musical delights of the past two years. Gene is best remembered for his work with the popular Three Sounds, which he formed in 1956. The group disbanded in 1973, and after some commercial electronic ventures, Harris settled in Boise, Idaho, where he has been directing the music at the Idanha Hotel. Ray Brown was instrumental in prying Gene out of Boise, collaborating with the pianist on several dates.

"On The Gene Harris Trio Plus One [Concord CCD-4303], his debut recording as a leader for Concord, Gene Harris is joined by the dynamic Stanley Turrentine, who had not played with Gene since a 1960 recording with the Three Sounds. This auspicious reunion is enhanced by the impeccable rhythm team of Ray Brown and Mickey Roker. A lively and demonstrative audience at the Blue Note in New York lends a party atmosphere to this live date. "I like recording live, particularly in clubs, where they're right on top of you," Gene notes. "There's constant interaction between the musicians and audience. At the Blue Note, you could feel the electricity in the air." And the super-charged music which resulted cuts across all stylistic and aesthetic boundaries.

Harris's style is a fascinating personal amalgam of varied influences. Having assimilated the two-handed blues and boogie of early idols Albert Ammons, Pete Johnson, and Freddie Slack, he added the fluidity of Oscar Peterson, and seasoned the mixture with a hint of Erroll Garner's timing and sly humor. Above all, Harris is a master of the blues, with the tools and imagination to weave endless variations on that timeless and universal pattern.

Stanley Turrentine is the perfect partner for Harris's blues explorations, as is immediately evident on Ray Brown's composition, Gene's Lament. The saxophonist builds nine soulful choruses, played with his characteristically warm tone and distinctive vibrato. Harris pours on the heat for five choruses and then shows his mastery of dynamics by switching to a sublimely delicate attack in the middle of the sixth.

Misty is a feature for Turrentine, who effectively mixes mournful, longer notes with feathery light interjections for a new perspective on the Garner standard. The tempo is doubled for the middle chorus. Harris's comping, Brown's perfect bass lines and Roker's tasty brush work form a superb backdrop.

Uptown Sop is another Ray Brown blues, but with a difference: here a 24-bar framework is used. Turrentine wails from bar one of his five solo choruses. After two romping choruses by Harris, Turrentine returns, gradually cooling things down to end the piece.

The Ellington blues, Things Ain't, is an object lesson in controlled excitement. Even at its most fervent emotional peaks, Gene's playing retains an undercurrent of discipline, precision and clarity.

Yours is My Heart Alone is an unjustly neglected standard dating from the 1920s. In Harris and company's hands, it becomes an up-tempo swinger. Everyone shines here. Turrentine flies through the changes and Harris's dazzlingly fleet single-note runs show him to be as well versed in the bebop tradition as in the blues. Roker's crisp and imaginative drumming comes to the fore in some eight-bar trades.

Battle Hymn of the Republic may seem an odd choice, but it has received a surprisingly wide range of jazz treatments over the years. Gene's use of substitute chords adds some new twists to the familiar melody. His introduction is deceptively gentle, leading into eight choruses of unflagging, gospel-tinged swing. Just when you think the pianist must have exhausted his supply of ideas (not to mention himself), he somehow tops his previous effort. Turrentine is equally inspired, ending with a fade-out over an extended vamp.

Gene summed up his feeling about the sessions by stating, "It was a joy to be on the same bandstand with players of this caliber." The results show that Gene Harris is back where he belongs."